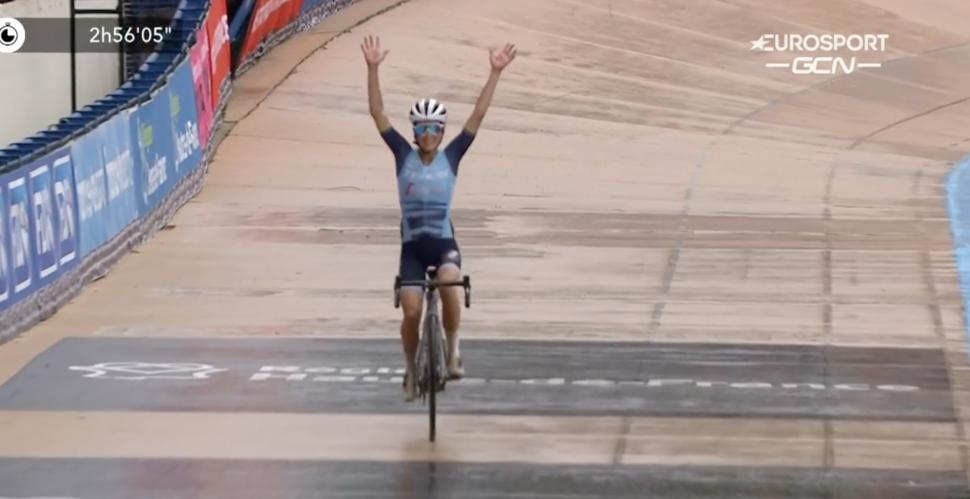 Finally, 125 years after cyclists first clattered over the cobbles of Paris-Roubaix, Great Britain has a winner.
by Will Bolton

Great Britain's Lizzie Deignan took a historic victory at the first ever edition of Paris-Roubaix Femmes.

The 32-year-old Trek-Segafredo rider went solo with around 82km to go to take an assured victory at the inaugural women's 'Hell of the North'.

As the riders hit the very first section of cobbles it was Deignan who emerged with a small gap on the rest of the bunch.

She pushed on and behind her the rest of the race exploded as the rain began to fall and the muddy cobbles led to a number of crashes.

With 16km to go Vos set off in pursuit and the gap began to tumble but Deignan kept calm, and upright, as the Dutch rider thundered over the cobbles behind her.

Deignan rode into the Roubaix velodrome, 125 years after the first male winner of the race first did so, with a smile on her face.

Crossing the line she grinned and raised her arms aloft.

Commentating, former world Champion and Olympic gold medalist, Dani Rowe said: "For Lizzie, this will mean it has all paid off. She has put so much work into this."

The first sector of pavé in the first #ParisRoubaixFemmes and Lizzie Deignan leads, big group behind... pic.twitter.com/RUbbf9Bu5q

Paris-Roubaix is one of the oldest, and most historic, races on the cycling calendar, having launched way back in 1896 and hosted no less than 117 editions since.

It was stopped only for the two world wars and the COVID-19 pandemic. This year is the first time women have had their own version of the race.