It’s Wednesday (though who can really tell for sure?) and Ryan Mallon is here for his first stint in the live blog hotseat to guide you through the post-Christmas malaise…

Our thoughts and prayers are with you at this difficult time.

Why do some Councillors think that open hostility towards cyclists is a vote-winner?

It appears most people haven't taken too kindly to Cllr Joyce's disgust at cyclists riding their bikes in Richmond Park. Stuart MacLean's comment on Facebook perhaps sums up the general reation we've got so far...

When the trust and camaraderie between teammates is unwavering, their power becomes unmatched. 💥

History tells many stories of humans who are forever bonded by their strength as a team.

UK cycling apparel brand Le Col has made it back into the big leagues by teaming up with Bora-Hansgrohe, as the team go forward in 2022 without that Slovakian bloke. Not everyone is keen so far, what do you reckon?

Bora's new kit for 2022. Maybe some die-hard fans of cubism will like it but I don't. The red square gives me a nasty headache. Bad. 👎 pic.twitter.com/EeEEcQ0w0g

Now I’m not the biggest fan of Strava – steady with the pitchforks – but even the most dyed-in-the-wool cycling luddite would find it hard not to be moved by this fantastic tribute created using the app.

Peter, a cyclist from Adelaide, rode over 100 miles for nine hours across the city to trace this image of a mother and a baby to celebrate his 200th donation of anti-D immunoglobulin to the Australian Red Cross Lifeblood.

Anti-D plasma is used to prevent Rhesus disease, which is caused by a specific mix of blood types between a pregnant mother and her unborn baby.

While 17 percent of Australian mothers need anti-D injections to ensure their baby is healthy, Peter is one of a pool of only 200 donors.

Here’s a story to warm your heart – or make you rethink your January training plans.

100-year-old Ivy Richmond is aiming to cycle 874 miles – the distance from Land’s End to John O’Groats – on an exercise bike given to her by her nieces.

The centenarian is certainly not new to extreme challenges. She spent her 100th year climbing nine flights of 18 stairs each day, reaching 10,000 metres in height in just under a year. By climbing the height of Everest (and an extra kilometre for good measure), she raised £2,360 for St Ormond Street Hospital.

She started her cycling challenge in November and has already completed 100 miles. Ivy told the Mirror, “I am pleased to be cycling now - I’ve certainly had enough of climbing stairs! I am grateful for the bike from my wonderful nieces and I’m happy to be making good use of it.”

Move over Cannavaro, that’s truly inspiring stuff. Might just have to dust off my own bike now…

You may have read in our latest opinion piece that no one cares how far you ride your bike. Well, it appears that World Cup-winning footballer Fabio Cannavaro didn’t get the memo.

The retired Italian centre half, winner of the Ballon d’Or for the world’s best player in 2006, took to Instagram to share photos – and Strava details, of course – of his epic 254km, almost eight hour Christmas ride from Naples to Rome.

The bike-loving 48 year old’s ride was aided (or more likely, made even harder) by the presence of former Liquigas, Astana and Bahrain-Merida pro Valerio Agnoli in the chain gang.

Agnoli towed Cannavaro’s group along at a not-too-shabby 33kph, prompting fellow Italian professional Giovanni Visconti to reply, “Valerio, not even to prepare for Sanremo did you train at these averages”.

Not a bad one to upload to Strava, eh? 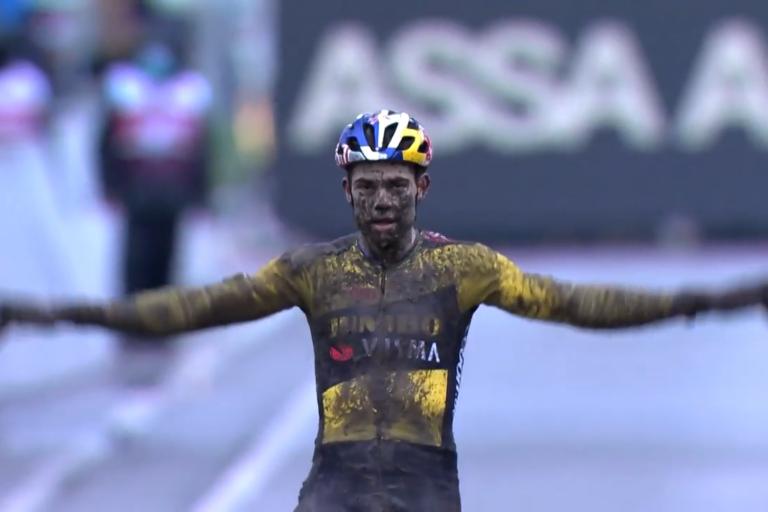 Wout wavers as Mathieu misses out

If, like me, you’ve been glued to the cyclo-cross this winter (apologies family and friends), then you will have noted the contrasting fortunes of the two superstars of the men’s side of the sport: Wout van Aert and Mathieu van der Poel.

Jumbo-Visma rider Van Aert has been in imperious form, dominating each of his five cyclo-cross starts this season, including back-to-back solo wins in Dendermonde and Zolder over the Christmas holidays.

Van der Poel, on the other hand, had been sidelined with a knee injury sustained in an innocuous training crash, and while his performance and second place behind his Belgian rival on Sunday (his first cyclo-cross race of the season) sparked hopes for some spectacular showdowns over the next month, he faded dramatically the following day in Zolder and failed to finish.

A recurring back injury, described by the Dutchman’s Alpecin-Fenix team as "a swelling on an intervertebral disc", also means Van der Poel will miss the next few races over the new year, and possibly the rest of the cyclo-cross season.

While injury may well rule Van der Poel out of January’s world championships in Fayetteville, Arkansas, Van Aert is remaining tight-lipped over his own plans to race for the rainbow jersey, after his coach Marc Lamberts claimed that his rider might skip the Worlds to better prepare for the spring classics on the road.

As things stand heading into 2022, the biggest event in cyclo-cross might, for very different reasons, be missing its two biggest names. Step forward Tom Pidcock, perhaps?

If you want to actively support a smaller women's cycling team, now's your chance.

Andy Schleck Cycles are selling off items of their first run of 2022 team kit that they were forced to change. This way they can recoup some of the costs the UCI made them spend. pic.twitter.com/4fs7Q2CsfO

Speaking of kits, you can now get your hands on some brand new 2022 team gear before the season even starts, courtesy of the Andy Schleck-CP NVST-Immo Losch women’s team.

The continental squad, co-sponsored by the bike shop owned by the baby-faced 2010 Tour de France winner, was forced by the UCI to redesign its kit for 2022 after three other Women’s WorldTour teams – UAE, Human Powered Health and SD Worx – unveiled similar takes on the peachy, pink, purple, sun-set theme.

The governing body’s decision was made despite the Luxembourg-based team’s decision to retain the same kit design that they wore during the 2021 season.

The team criticised the ruling in a Facebook post, writing that “our team was highly surprised because our team is the only team of all teams below who did NOT change their jersey colors in any way comparing to our 2021 jersey.  Despite that our team was the first of all UCI teams with this design, the UCI still denied our jersey and leaves our team behind with an unfair feeling, especially because all our kit was already finished.”

Since the now non-approved kit had already been produced and in a bid to recoup some of their losses, this morning the squad announced a sale of the offending gear, including jerseys, skinsuits and gilets.

So if pink and purple – and supporting a small women’s team – are your thing, make sure to have a look: they’re selling out fast!

We’re all used to the Daily Mail’s habit of describing – in sometimes uncomfortable detail – the clothing choices of the rich and famous (personally, I’m a big fan of the paper’s obsession with couples “matching” their outfits, but each to their own…).

But when Indiana Jones himself Harrison Ford was spotted looking extremely cool on his Colnago during a weekend spin in Santa Monica, California, well… things got weird.

Mail Online described the actor as looking in “fantastic shape as he rocked a clinging black cycling jersey and bib combination from Pedal Mafia”. The article was also at pains to point out that Harrison “made sure to wear protection as he also sported a black helmet along with matching shades” and that he “completed the look with black cycling shoes which were clipped into his red road bike.”

Maybe I’m just jealous, though I am looking forward to the next article featuring Ford doing some kind of exercise. I heard he’s a (Blade) runner. I’ll get my coat.

Another day, another Richmond Park ‘bikes versus cars’ story. This time a Conservative councillor has come under fire for posting a video on Twitter of what he called ‘the Royal Parks velodrome’.

Two days ago we reported on a nasty incident between a motorist and a cyclist in the park, while instances of irresponsible and occasionally deliberately reckless driving since cars were readmitted earlier this year are regularly recounted on social media.

So it’s no surprise that Seamus Joyce’s tweet, originally posted two weeks ago, went down like a bad Christmas cracker joke.

Some were complexed by Joyce’s motivations, with Rendel Harris replying, “Two cyclists making an entirely safe and legal overtake on a car. Your problem with this is...”

Even non-cyclists were bemused, with Chris Hutber writing that “I'm no fan of a lot of cyclists, but they seemed to overtake perfectly safely.”

Others questioned Joyce’s own choice of transportation:

Why are you using a nature reserve and SSSI to drive your motor vehicle through? Maybe you could consider a less harmful mode of transport in this unique natural environment, like cycling, for instance?

I can clearly see cars polluting what purports to be a park, a National Nature Reserve and an area of Special Scientific Interest.

Joyce has since responded to the barrage of complaints, posting that he was driving his electric Nissan Leaf to a PSA blood test to check for prostate cancer (thankfully the results were negative).

The councillor, who is the opposition spokesperson for Transport, Street Scene and Air Quality in East Sheen, appeared in a Conservative campaign video just last month… riding a bike.

Your East Sheen Dream Team for the local elections in May 22. We will listen to residents, no surprise LTNs, working with ⁦@NJROnline⁩ on ⁦@TfL⁩ matters, we support a ward consultation on CPZs next May ⁦@sheen_dream⁩ ⁦@brianmarcel⁩ ⁦@LdnConservative⁩ pic.twitter.com/7U8InL6Y9t

On the day of Joyce's tweet, two drivers were involved in a head on collision in Richmond Park between Ham Gate and Kingston Gate, obstructing part of the road.