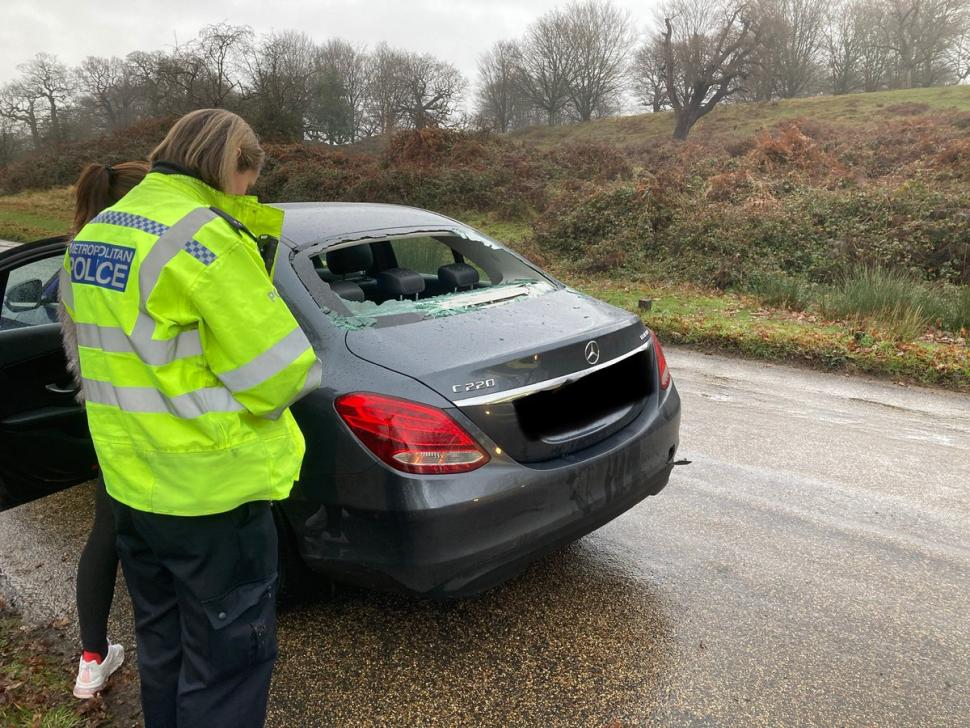 A ​cyclist crashed into the rear window of a car in Richmond Park yesterday after a driver slowed down to let some geese cross the road, according to police.

The incident happened on Boxing Day morning between Kingston and Ham gates, according to a tweet from Royal Parks police, accompanied by a photograph of the broken rear window of the Mercedes car involved.

Officers at #RichmondPark have been dealing with a road traffic collision between Kingston Gate and Ham Gate after the driver of a vehicle slowed to allow some geese to cross the road and a male on a bicycle collided into the rear of her vehicle and through the back window. pic.twitter.com/dNbWJPBDgY

Officers confirmed that the male cyclist had been taken to hospital, adding that his injuries were not “life threatening or life changing,” and that they are continuing to investigate the incident.

News of the crash has reignited calls for motor vehicles to be banned from the 955-hectrare Royal Park which is hugely popular with cyclists from southwest London and beyond and is a national nature reserve, a Site of Special Scientific Interest and a Special Area of Conservation.

Among those responding to the tweet from the police was Rory McCarron, a specialist cycling lawyer at Leigh Day solicitors, who was riding his bike in Richmond Park yesterday and described how he had seen some “awful driving,” including motorists exceeding the 20mph speed limit.

Richmond Park was closed to motor traffic for five months from March last year due to the coronavirus pandemic, and the decision by The Royal Parks to reopen the roads to rat-running drivers from March was described as a “reckless and drastic” move by London Cycling Campaign. Access to the park for motorists is due to be reviewed in the New Year.

Footage of close passes on cyclists and other instances of irresponsible and intimidating driving is regularly posted to social media, and we have regularly reported on cyclists being injured in road traffic collisions in the park.

Last month cycling instructor and bike mechanic David Williams said he was knocked off his bike on purpose by a driver as he returned home from a training session at a local school.

The 53-year-old broke his collarbone and sustained severe bruising as a result of the incident, which is being investigated by the Metropolitan Police.

"This one car, a blue BMW, went past me and was really close,” he said. “I slapped the boot to let the driver know how close he had been.

“He immediately braked quite sharply. I wasn’t able to stop but filtered along the road between the car and grass and ended up in front of him.

“Immediately, he then accelerated and came alongside me – about a foot away. I rapped on his roof to make the point he was too close and get him away.

“He accelerated again and swerved in towards me, knocking me off balance and I fell right onto my shoulder into the road. He then sped off down the hill.”

He added: “The people in the other cars behind me were shocked. This was not an accident. They probably thought they wanted to scare me, but the consequences are very serious for me.

“My head hit the floor quite hard and my helmet is now finished as it has a big crack in it.”

1
Aggressive driver tries to ram cyclist in shocking footage...but "insufficient evidence" for police action
2
Cyclists now outnumber drivers on many A-roads, Department for Transport figures reveal
3
Conservationists blame "anti-social" cyclists for New Forest damage
4
Bowman Cycles liquidates after "absolute clusterf**k" of supply chain issues
5
New cycle lane blamed as family home to be demolished for roundabout redevelopment
6
Five cool things coming soon from Deda, Giro, MAAP, L-Bow and KOM
7
Near Miss of the Day 694: King of MGIF drivers just has to get in front at congested roundabout
8
"For all he knew I could have been dead": Cyclist searches for hit-and-run driver