With Dan Alexander on his holibobs, Liam Cahill takes the wheel of Monday's Live Blog...

.@GeraintThomas86 will head for an ultrasound post-stage, having suffered a dislocated shoulder in his crash. It was put back in at the scene by the race doctors. A full update will follow later #TDF2021 pic.twitter.com/EJa4Jz9w48

Picking today's stage apart is going to be a tricky business but one thing that we know for sure is that the X-ray truck that follows the race will have a bit of a queue forming.

Thomas is on his way there now after his crash early in the stage while Roglic, who came down really hard with 10km to go is also headed for a scan. He's got a sore coccyx according to his DS.

We're not sure how much the Fisherman's Friend social media person knows about bikes, but that ooks like it could be a puncture. Of course, it could be that Laura did indeed forget her front thru-axle (we've been there) but took the above picture as it was easier to frame.

Commenting on the caption, Paul Murphy said: "Except that's the back wheel and the tyre being soft is nothing to do with the quick release axle..."

Adrew Hooper added: "They’ve [Fisherman's Friend] helped out on many a situation, like that time stuck in a blizzard on snowdon, and the soothing lozenges got us through it."

Whatever the case, Laura had her strong menthol Fisherman's Friend lozenges to make everything better. Extra points for colour-matching them with the Hope brakes too! 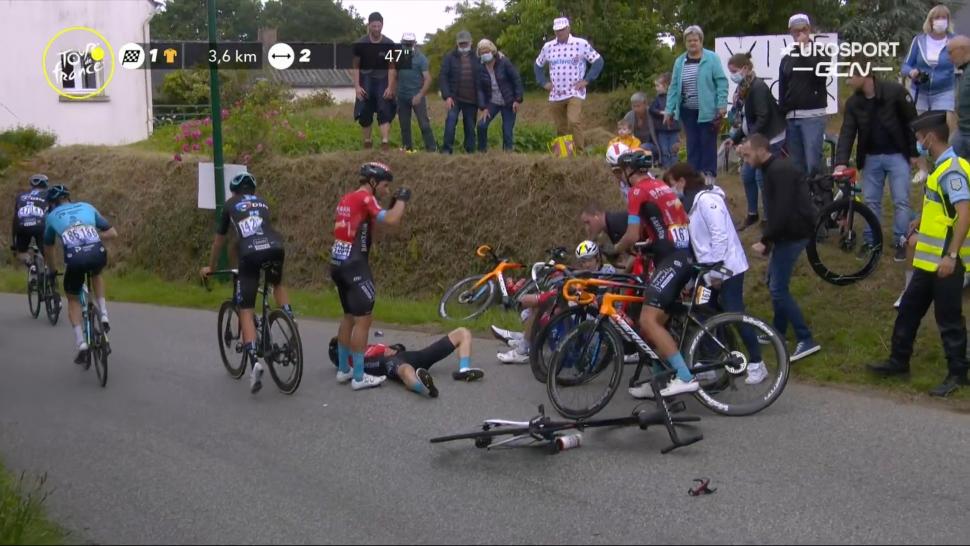 Today's stage has been another crash-filled one. Jack Haig is out, he was an outside bet for the GC and Caleb Ewan has reportedly not finished after crashing around 100m from the line. His teammate says that he's gone to hospital.

Jack Haig is out of the Tour de France. Caleb Ewan didn't cross the finish line and according to teammate Roger Kluge (via @SophieSmith86) is off to hospital #TDF2021

Meanwhile, speaking to Sporza, Deceuninck Quick-Step's Tim Declerq has said that the riders asked for GC times to be taken at 8km to go, but officials didn't respond.

#TimDeclercq reportedly told Sporza post-stage: “Riders requested before the stage to take GC times at 8 km to go as the final was very technical. Unfortunately, there was no response.” #TDF2021

Gilbert Versier, the surgeon working on the Tour de France as one of the in-race doctors has described the mass peloton pile-up on the first stage of this year's race as looking like the scene from a war.

Versier, speaking to l'Equipe, told of how he arrived on the scene to find "the same chaos, the same moans, bodies everywhere, and tangled machines."

The crash, the first of two big incidents within the first stage, was caused by a fan who was holding a cardboard sign out into the road. The woman, who the police are yet to identify, was facing away from the road, trying to catch the attention of the passing TV motorbike.

Versier says that when a large crash happens in the peloton "you can't imagine so much breakage. In the midst of the commotion, the riders are getting up and wanting to start again, the most serious cases must be identified.

"In general, these are the ones who are furthest from the accident site, because they have been thrown."

Thankfully, despite the two high-speed crashes taking down countless riders, only three riders were unable to finish. Marc Soller, meanwhile, finished with two broken arms and did not start stage 2.

We're not entirely sure what happened there, but a crash at the front of the bunch has taken down pre-race favourites Geraint Thomas of Ineos Grenadiers along with Primoz Roglic of Jumbo Visma.

Thomas appeared to jolt upwards, suggesting that he could have hit a water bottle which would be the same way that he crashed out of the Giro last year.

Roglic remounted soon enough, but his teammate Gesink is out of the race. Thomas took longer to remount, with Bernie Eisel saying that he saw Luke Rowe signal that is was over for Thomas.

A dislocated shoulder, immediately treated by the team's osteo, they stated on @RTBFsport

Reports from the race suggest that it was a dislocated shoulder that was put back in at the side of the road. Thankfully, Thomas is making his way back to the peloton, though he has around 2 minutes to make up.

At Kalas in Tabór, CZE, they quickly made new bibs for Mathieu van der Poel

Want a pair of custom bib shorts made for you last minute and then overnighted to you, all so that you don't have to colour clash navy blue with yellow? You just need to be one of the best bike racers on the planet.

This also answers our earlier question as to whether Van der Poel would go full yellow or break out his much-loved white bib shorts.

New bike day for @mathieuvdpoel, and it's a beauty!

The Aplecin-Fenix mechanics probably had this one hidden away in the team truck and they'll be rather pleased to be able to use it.

The big question is, however, what bib shorts will Van der Poel don for today's stage? He's a big fan of white, but he could also go full yellow. Time will tell.

There’s a few lycra-clad colleagues who bike to work each morning (for some reason, they all work in our financial PR team). I’ve always viewed them with a mix of respect (hardline exercise at 06:30 - gruelling !) & as a bit bonkers given how dangerous urban roads look to me.

My first error (and I appreciate this is both a rookie one and a fundamental one) is that I didn’t wear a helmet. It’s not the kind of thing one carries around. The speed was fun - downhill! - but I was acutely aware I was one pothole away from a life-changing brain injury.

I was amazed at the speed of getting from place to place. That shouldn’t be a revelation but it was. 5 tube stops in about ~15 minutes! Urban areas are actually pretty small as the crow flies and I can now see the attraction of biking over the car, bus or train. And it’s healthy!

I appreciate much of the above are the naive ramblings of a novice - but that pretty short ride taught me a good deal about cycling, why it’s easy and fun and how it can be made a bit safer. I’ll give it a go again at some point!

Looks like we've converted another one. One at a time, people, one at a time.

Mark Cavendish has announced that he is set to launch a series of NFTs (Non-Fungible-Token) which celebrate his 30 stage wins at the Tour.

The NFTs include "exclusive drops, art collaborations & new drops", though we're not entirely sure what you'd virtually be the owner of.

The comments on Cav's Instagram post aren't all positive, with several pointing to the less than favourable environmental impacts attached to the digital art.

Cavendish joins Bahrain Victorious in the crypto-art world. His former team turned up at the team presentation in shiny new jerseys, but they were then destroyed and one virtual copy will be auctioned to raise money for diabetes charities.

Back in the real world, Cavendish will be hoping to take a win in today's stage, which we'll have a look at in just a little bit.

It's Monday again and we're feeling a little like Mathieu. Admittedly, his tiredness was caused by an exceptional stage win that also netted him an emotional rendevous with the Yellow Jersey. Ours is caused by a couple of easy rides and some light gardening, but it's all relative...

Here's what you might have missed at the weekend, starting with non-TdF news.

And now for a round-up of TdF news...