The Gendarmerie du Finistère said the woman, who also faces being sued by the race organisers, had run off before officers were able to talk to her
by Will Bolton

Police are today searching for the spectator who caused a massive crash at the Tour de France while holding up a cardboard sign and grinning at the TV cameras.

Jumbo-Visma's Tony Martin collided heavily with the woman while she held up the sign.

The Gendarmerie du Finistère said today that the woman had fled the scene before police officers arrived to question her.

She was described as wearing glasses, blue jeans and a red and white striped jumper beneath a yellow jacket.  The race organisers, ASO, also announced yesterday that they would be suing the woman.

The sign she was holding had the words, ′'ALLEZ OPI-OMI!', a German term of endearment for grandparents.

Race deputy director Pierre-Yves Thouault told AFP: "We are suing this woman who behaved so badly.

"We are doing this so that the tiny minority of people who do this don't spoil the show for everyone." 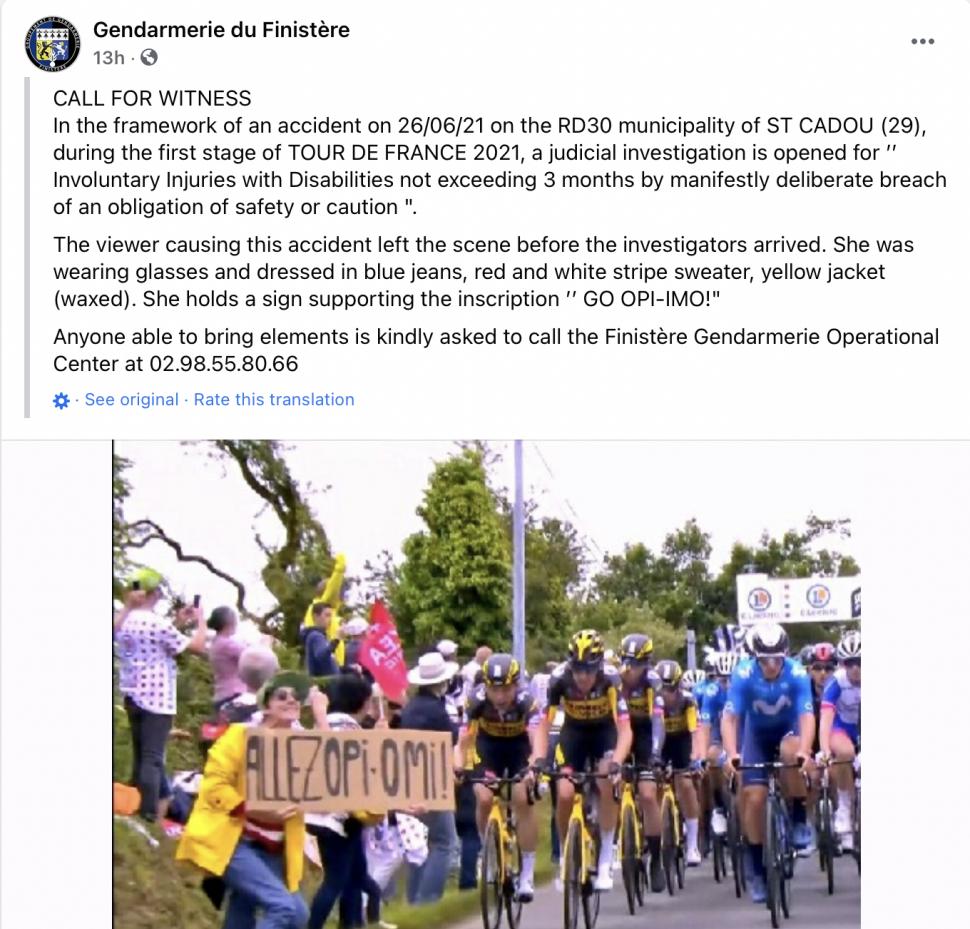 "Leaders down, downed riders everywhere and this is chaos. This is exactly what we didn't want on the opening day of the Tour," said Rob Hatch, commentating at the time.

The crash happened with just 45 km to go during yesterday's stage from Brest to Landernau.

Jumbo-Visma's Tony Martin went down hard right at the front of the bunch after colliding with the spectator and took out most of his team, along with a large proportion of the peloton.

Martin had no time to avoid the woman – who wasn’t looking at the bunch and was instead grinning at the TV cameras while holding a sign over the road.

Jasha Sutterlin (Team DSM) was forced to pull out of the race altogether after the crash.

Speaking after the race yesterday, Bradley Wiggins said:  "It happens quite often… but [fans] are part and parcel of the spectacle of the Tour de France and this year in particular being able to come back onto the route and watch it.

"I don’t know how you police it. We were talking while we were watching it and asked is it not the duty of the people around the spectator?

"But until the riders come up you have no idea what this person is going to do with that board."