Pinch punch first day of the month, the weather's grim so stay in with Dan Alexander on the live blog instead... What an achievement! Right up there with his recent appearance on the road.cc podcast I'm sure... here's the full story on Bigham's ride, hot on the heels of his partner Joss Lowden's new world Hour Record yesterday.

Here we go... Dan Bigham's about to see if he can repeat the Joss Lowden magic by conquering the British Hour Record this afternoon. Dan's riding the same aero machine as Joss, the Argon Electron Pro with some Fast Forward Disc TSL wheels and Vittoria Pista Speed 2.0 23mm tyres.

Interestingly, Dan's bike is kitted out with some of his own WattShop kit, including the Olympic edition Pentaxi base bar and Anemoi aero extensions. That's an £8,500 cockpit alone...as per Dan's website.

As for his kit, Dan's opted for the Kask Mistral helmet and a brand new Vorteq Hour Record edition skinsuit in WattShop colours of course.

Those are the details...the short of it is he's going to be a very aero lad powering around a velodrome for an hour...how far can he go though?

Vincenzo Nibali had his hands on his head as he crossed the finish line the winner of stage four and the overall at the Giro di Sicilia. This is a rider who has twice won the Giro, won all three Grand Tours, three Monuments and 15 Grand Tour stages. It shows how much winning again, on his home roads, means to the Shark.

The 36-year-old's last win was on the penultimate stage of the 2019 Tour de France, he's struggled since. Nibali will be returning to Astana next season on a one-year deal, the same team he won the Giro with in 2013 and 2016, plus the Tour in 2014. Will we see the veteran campaigner back at the top again in 2022?

This one gives a whole new meaning to punishment passes...the clip was originally posted to Facebook by a profile named Sonny Oldenburger with the caption, "If you use my lane, I will use your lane...ciao". It came to our attention via the suitably named 'Idiots in Cars' Reddit page and shows a driver leaving the road to overtake a cyclist, presumably to prove some kind of point about where he 'should' be riding...

From the speculation in the comments and a bit of local knowledge, the video seems to have come from Germany. One commenter explained the path to the right is a shared-use route and the road likely has a speed limit of 60mph (100kph).

Your top (sensible) comment summed it all up nicely: "Wanna see an otherwise normal-seeming person act like a deranged psychopath? Put them behind the wheel of a car on a road with someone riding a bicycle. It's truly amazing how irrationally mad riding a bike on the road makes some folks."

Another reply commented: "Well, it is called 'Idiots in Cars'. He fits the description perfectly. Would be nice to include an IQ test for the driving exams."

Here's an interesting take on the Hour Record - a challenge famous for being about riding as far as possible. If the record was about taking metres off, I reckon a fair few of us here could give it a go! Damn, checked the comments and everyone beat me to that joke...

I reckon I could knock a few kilometres off the men's record.

I could probably knock 10 minutes off the men's record

Dan Bigham's up next...we'll share the link to watch his effort just before 3pm. Unfortunately, as we shared with you yesterday, he can't take the outright record, even if he beats Victor Campanaerts' distance. That's because he hasn't been in the UCI Testing Pool because he doesn't ride for a WorldTour or second division team. Either way, Sir Brad's British record is on the line... 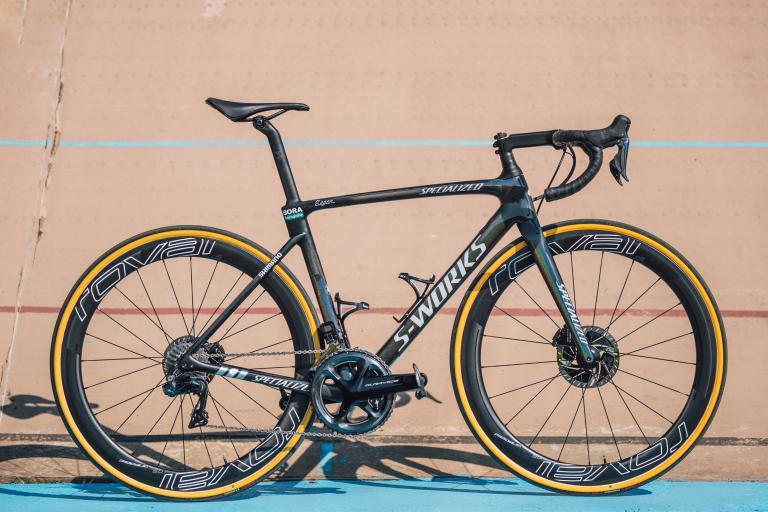 Peter Sagan’s Specialized S-Works Roubaix - But will he ride mechanical?

Sagan has been spotted riding both his Shimano Di2 bike and a mechanical Dura-Ace setup in his Paris-Roubaix recon rides
5
01 October 2021, 12:22
Questions asked of Paris-Roubaix Femmes prize money

So much horror going on at the moment, I've been holding onto @JossyLowden's #UCIHourRecord yesterday and the first ever women's #ParisRoubaix2021 tomorrow (ignoring the fact that not all of it is being televised 🤬) but this is just an insult. 🤬 https://t.co/uhLM9U9vHz

At this rate he's going to need a bigger city, having attracted a mega crowd for his Boiler Room special in London. The full episode is up on Dom's YouTube, which now has more than 120,000 subscribers...

The latest episode features a tunnel rave on CS3 and a man with a parrot...now get yourself over to Amsterdam, Dom... French UCI Pro continental team will be wearing new kit that reflects Look’s Mondrian-inspired logo at this weekend’s cobbled classic
3
01 October 2021, 09:36
Be careful what you wish for, Mathieu: "I think it would be quite cool if it rains!" 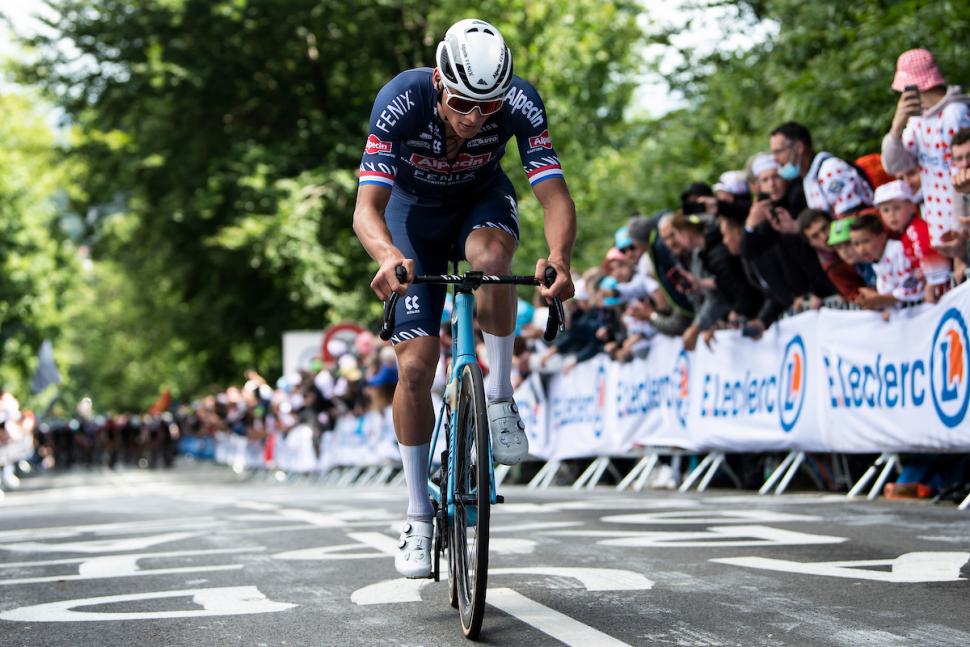 In amongst the lost blog yesterday were some quotes from Mathieu van der Poel ahead of Paris-Roubaix. We hopped on a Zoom call with the pedalling phenom to see how he's feeling ahead of his Hell of the North debut, and there was no sign of nerves from the Dutchman about the prospect of biblical conditions...

"I think it would be quite cool if it rains!" he laughed. "But yeah, dangerous too. If you avoid the crashes then it counts for a lot. It's always the case in Roubaix. You have to try not to get a flat tyre or crash. When it's wet it's even more the case. If they crash in front of you it's hard to avoid it. But yeah, it would be nice to ride a wet Roubaix once!

"He also gave us the latest on the course and confirmed it was mainly dry on Thursday morning when he did his recon..."The cobbles were dry except for one small part that was bit muddy, but I can imagine it is very slippery when it is raining. If you can stay out of trouble and at the front then wet cobbles are okay. I hope the Worlds added a bit to my shape and I can finish my season in a nice way on Sunday."

A final nugget is that after Sunday the 26 year-old will take a well-earned rest for a couple of months, returning to competition for the cyclo-cross calendar in December.

Here's your final Paris-Roubaix weather forecast of the week. Spoiler alert: it's going to be absolute carnage. Saturday shouldn't be too bad for the women's race...although the final may get a bit damp.

But look at that rain overnight, then prepare yourselves for Sunday...

Get whatever you need to do out the way early and glue yourself to the sofa for the afternoon. road.cc Liam is going training at six to be back in time for every single second...Mud, standing water, crashes, mechanicals. It might just be last man standing.

As someone who commuted through one of Britain's wettest winters without mudguards, I now feel ready to join the dark side. And when I say dark, I really mean dry and comfortable...

The white socks are back in the draw and the winter tyres will be making an appearance when the clocks go back. Anyone folded early and got the mudguards on already?

Resisting the temptation to put the mudguards back on the gravel bike. Normally try and wait until the clocks go back. A bit like holding off on the central heating until it gets really cold.

If like me you're in the market for some...check out our 20 of the best mudguards - how to stay dry on any type of bike feature.

"In a right-side up world, drivers would have to press a beg-button to cross the street..."

The Dutch have it sorted.

At this #Delft intersection, cyclists and pedestrians get a continuous green; the arrival of a car or truck sets off a sensor, which allows it to cross. pic.twitter.com/q7cNxUQcBG Yesterday road.cc had a massive tantrum, which ended up with us having to create a new version of it and get rid of everything from yesterday... that means unfortunately yesterday's live blog was lost! Obviously we're really sorry about this, it's as frustrating for us as it is for you and it's certainly not how we wanted our day to pan out.

To very briefly summarise what happened yesterday... Joss Lowden broke the Hour Record, smashing the previous record to set a new distance of 48.405km. Read all about her bike here.

There were scenes of chaos around petrol stations again, with motorists seen using a cycle lane as a petrol queueing lane in Brighton.

Scottish MP Colin Smyth waded into a helmet row when he commented on the Twitter post of Green MSP Patrick Harvie.

And our big 'debate' of the day... someone on social media suggested that there should be a six-month trial banning cleats in London to encourage riders to stop/slow down at lights. A pretty wild suggestion, and many of you surprisingly didn't agree.

Peeta Stebbenwolf on Facebook said: "Cleats actually make you more stable on a bike, better at riding in a straight line & faster. For drivers who think they’re dangerous, try them! Oh & if you’re hit by a car, whether you were clipped in or on flats is likely to make little difference."

Sam Field added: "Maybe we could have 6 months with no booze so drivers drink and drive less?"

While Bobby Carvell suggested: "Just ban life and have done with it."

01 October 2021, 07:56
Child can't use cycle lane during Bike to School Week because of drivers queueing for petrol

People queuing for petrol on Bounds Green Road @haringeycouncil block a cycle lane a child is trying to use to get home from school, on #BikeToSchoolWeek pic.twitter.com/t8JFdlpgWE

Happy Bike to School Week! Although it might not have seemed quite such a celebration for the kid pictured having to wheel his bike around the queue of stationary motorists blocking this cycle lane in Haringey as they wait for petrol.

I guess it's preparing them well for what they'll have to deal with cycling anywhere in the UK...

The picture attracted a powerful reaction online, with one reply saying we might as well call it Don't Even Think About Biking To School Week. The London Cycling Campaign also chipped in, sharing the pic to its followers with the message: "London's young people deserve so much better than this."

It wasn't just in London either...these were the scenes in Brighton yesterday as drivers made use of that nicely painted lane on the left while they waited...

A bad day on the roads at #Patcham #Brighton today, @SussexRoadsPol @BHCC_Transport
Drivers queuing in both directions for #Petrol. Southbound cycle lane past filling station on A23 completely blocked, with consequent risk to people cycling. Radical change needed.@CyclePatcham pic.twitter.com/o1ZEbbYyIN