Cyclists ,made 2.4 million trips on London's Cycleway 3 in 2020 according to the cycle counter close to Embankment Underground station - while across the river, the Blackfriars Road cycle counter recorded 1.1 million bike rides on Cycleway 6.

A cyclist in Edinburgh has asked the city council why a bike lane on a main road in the Scottish capital was not gritted for three days after a recent snowfall, forcing many to take to the main carriageway instead.

The cycle lane on Comiston Road, which runs from Comiston to Morningside in the south of the city, was put in place last year as part of the council’s Spaces for People programme to encourage active travel during the coronavirus pandemic.

Edinburgh News reports that one local resident, Paul Bailey, wrote to the council’s transport convener Lesley Macinnes to point out that while the main road had been gritted, the cycle lane had not.

“On Wednesday, to my surprise, I met a cyclist attempting to negotiate the icy surface of the cycle lane. A few seconds later the cyclist left the dangerous cycle lane and moved out into the main carriageway.

“This of course leads to another problem; the overtaking car needs to straddle the central white line to give the cyclist room; further up the road where parking is allowed, the main carriageway is even narrower - 3.25 metres.

“Spaces for People was meant to help cyclists and pedestrians. Clearly the Orcas  are creating a serious problem which needs to be addressed promptly. Waiting until the next review on January 28 is unacceptable when you know about the danger now.”

A spokeswoman for Edinburgh City Council commented: “Our gritting teams work 24/7 to respond to poor conditions on the city’s roads, cycle paths and pavements.

“We operate a priority gritting system, treating priority one routes first, which include principal roads, bus routes and roads and pavements leading to hospitals, fire stations care homes, in order to keep the city moving.”

It's the second time in a month that the council has faced criticism for not gritting the same cycle lane, with one Twitter user saying after a snowfall in early December, "Looks like we may have to clear these ourselves."

Looks like we may have to clear these ourselves. Was it beyond the ken o man to expect the snow not to fall in the cycle lane. The smaller machinery that does the pavement will fit the lane no problem. Not doing it is inexcusable.

It's the first of January, and among other things, that means that riders announced as switching teams in recent months will now be able to go out in the kit of their new team - and of course, in some cases that will mean not only a completely different kit to the one the team wore last year, but also a change of name.

Among the teams to have changed name due to a change in sponsor is Team Bike Exchange - formerly Mitchelton-Scott - and besides a new kit, modelled in this video by Simon Yates and Teniel Campbell, there's also a new bike sponsor, Bianchi.

Meanwhile, Mark Cavendish is back at Deceuninck-Quick Step, who have given their kit a bit of an overhaul - here's the former road world champion sporting it, together with rainbow bands on the collar and cuffs. 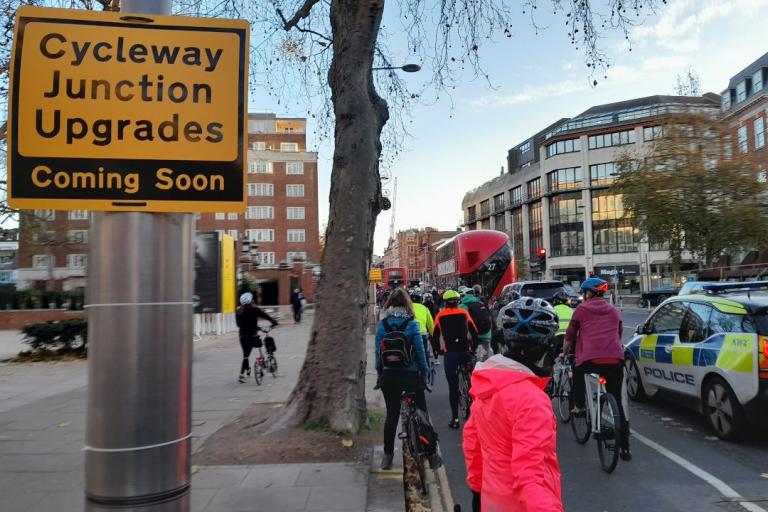 A study of traffic on Kensington High Street has found that congestion worsened after the Royal Borough of Kensington & Chelsea ripped up a temporary cycle lane there last month.

Campaign group Bike Is Best also said that its research shows that the space formerly taken up by the cycle lane is now blocked by illegally parked vehicles up to 80 per cent of the time, reports the Guardian.

More on this story on road.cc later.

1
Near Miss of the Day 528: Driver pulls out on cyclist “lit up literally like a Christmas tree”
2
Bike at bedtime: Festka Doppler
3
Cyclist “seriously concussed” avoiding vehicle on Kensington High Street – where council recently tore out protected cycle lane
4
Brighton woman riding with her child on her bike sent face-first into wall by another cyclist
5
Decathlon to stock new Santini UCI World Champs collection
6
Near Miss of the Day 526: Flatbed truck driver clips cyclist while attempting mindless overtake
7
Brexit and the bike industry: how the situation is evolving
8
Tom Dumoulin to take a break from racing