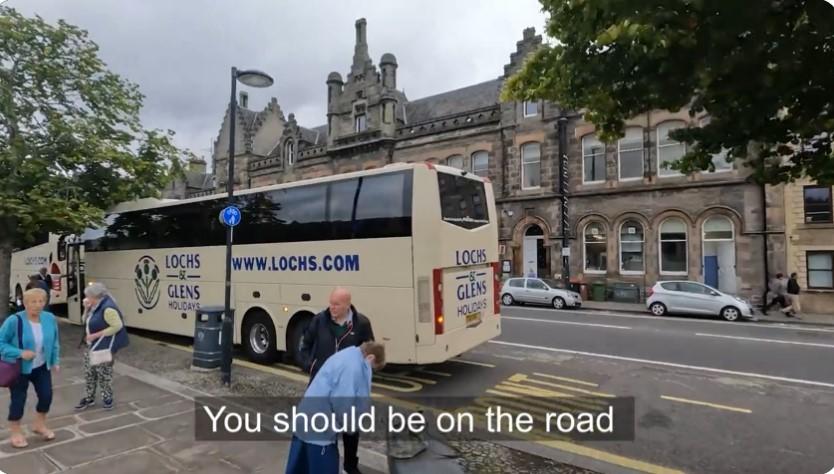 Coach driver tells cyclist with child he "shouldn't be on the path"... right under a shared use path sign

The cyclist was on his way back from a meeting to support local walking and cycling infrastructure before the confrontation, with the coach driver adding that the cyclist "should be on the road"...
by Jack Sexty

A cyclist riding with his child in a child bike seat in Perth, Scotland has posted footage of a confrontation with a coach driver who tells him that he "should be on the road", despite a sign denoting that the path is shared use for cyclists and pedestrians shown just a few metres away from him.

Cyclists will never be safe. I was coming back from a Kidical (Play on Critical) Mass bike meeting in Perth, to support better local walking and cycling infrastructure. We had 2 close passes by 2 SUVs but on the way home, to be shouted at by a bus tour driver is unreal... pic.twitter.com/2U3QFC4skA

The cyclist, Scott, said that he was on his way back from a meeting to support better walking and cycling infrastructure, and was ironically close-passed by "2 SUVS" on the same journey that he was shouted at by the coach driver.

> Near Miss of the Day: Why do we do the feature and what have we learnt?

The coach is stopped and people are shown disembarking, and the cyclist can be heard talking to his child while ringing his bell. The driver can be heard saying "you shouldn't be on the path" and then adds "you should be on the road."

Scott replies: "Can you look at your sign and see that it's a shared cycle path? The sign is right next to your bus mate.

"...learn how the Highway Code works."

The clip led to a debate over the suitability of the shared use path and how to cycle around potentially vulnerable pedestrians, with elderly people shown disembarking from the coach.

Under the video, one person commented: "Not everyone will hear a bell (some people are deaf) Also just cos it’s a shared path doesn’t mean we get to carry on always. Pedestrians still have priority so in the situation in the vid you could argue that you should slow down even more, or even stop."

Scott added: "I had my feet of the pedals and ready to stop for people coming of the bus and not seeing me. I also even tried to ring my bell in a quiet way. These are the things I think about cycling that drivers just don't understand."

He also told road.cc that he continued on the journey after the confrontation with no further issues, saying that the path provides "a nice ride along the side of the Tay."

Back in 2016, an Edinburgh cyclist was threatened with a fine by police officers for riding on a shared use path. One of them allegedly told the cyclist he had committed a “ticketable offence", and a complaint was made to Police Scotland about the conduct of the officers.

On cycling on shared use paths and facilities, Rule 63 of the Highway Code states: "When riding in places where sharing with pedestrians, horse riders or horse drawn vehicles is permitted, take care when passing pedestrians and horse riders, especially children, older adults or disabled people. Slow down when necessary and let them know you are there; for example, by ringing your bell (it is recommended that a bell is fitted to your bike), or by calling out politely."

road.cc has contacted the coach tour provider for comment.