Today, Lars van der Haar won the first round of the UCI cyclo-cross world cup in Valkenburg, Netherlands. On a bike with hydraulic disc brakes.

For advocates of disc brakes, this is a pivotal moment. The UCI first amended their rule book allowing the use of disc brakes at the highest level of cyclo-cross racing for the 2010/11 season. It's fair to say there has been anything but a flood of adoption with most of the pros have been sticking to well tried-and-tested cantilever brakes. Over on the other side of the pond meanwhile the US scene has seen a lot more disc brake action, quite a handful of the top racers like Jeremey Powers have been racing disc brakes loads. 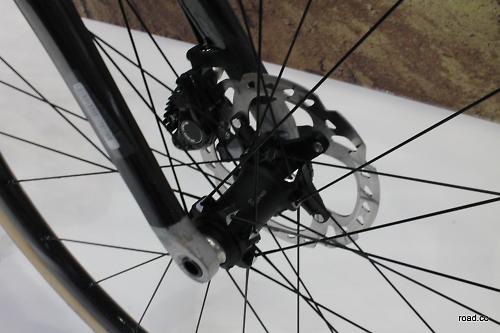 So, his bike, and those brakes then. Lars raced a Giant TCX Advanced equipped with Shimano's latest hydraulic disc brakes, which our Dave spent three days in sunny Sicily last week riding. The groupset on this bike, which we saw at Eurobike back in September, is a mix of Shimano's Ultegra Di2 and Dura-Ace, though his actual race bike will most likely be a full Dura-Ace groupset - we'll confirm all the spec details on his race bike as soon as we get a closer look. 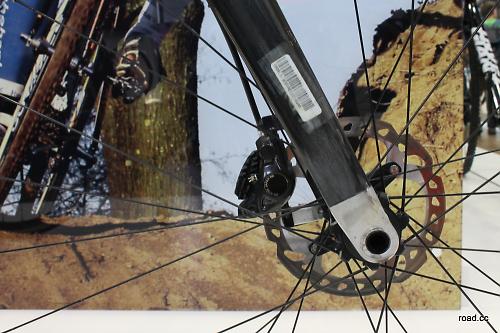 This bike also had Shimano XTR wheels with Dugust tubs glued on, and used XTR rotors as well. All the wires are neatly routed internally in the carbon frame. The new disc fork has a bolt-thru axle, a large diameter hollow axle that threads into one side of the fork. It makes for a stiffer and more secure set up. There's a regular quick release axle at the rear. And those world champ stripes on his Fizik saddle, they're because he's the World U23 Cyclo-cross Champion. Oh, Giant claim a frame weight of 1,050g, which is mighty impressive if it's true. 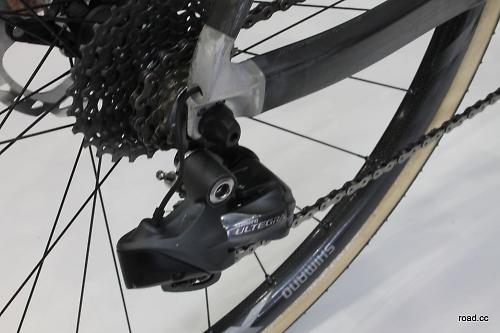 It was only a matter of time before this day came. Of course, let's just remember that it's the rider, his legs, tactics and other uncontrollable events, like Sven Nys retiring due to a mechanical failure, that have to be considered when looking at his result. We're not saying the disc brakes were responsible for the win.. Even so, it's not impossible to see the benefits that better brakes offer as being attractive as this level of cyclo-cross racing.

They're more powerful than cantilevers, so you can scrub off speed more easily and quicker, so more speed can be carried into the entry of a corner. There are potential downsides though, clearance between the rotor and pad could be an issue, but it didn't appear to concern Lars in his race today. And there's the fact that the braking surface, at the centre of the wheel and so away from the gloop, should offer more consistently reliable braking. Many might wonder why it's taken this long for a disc-equipped 'cross bike win at world cup level. Part of the reason is that hydraulic disc brakes from the Shimano and SRAM have only just become available, and even now there are are still supply problems, particularly with Shimano's offerings. Many of the top racers will have been reluctant to adopt a new, and at this level, unproven technology, so they've stuck to tried-and-tested cantilever brakes. Even with this win, as notable as it is, it'll likely be some time before disc brakes begin to outnumber or even replace cantis, if at all.

Will the floodgates for disc brakes in the UCI cyclo-cross world cup be opened now? We'll have to wait until the second round to see...