We’ve just got back from a sunny Milton Keynes where we saw the Genesis Bikes 2014 range, and exciting stuff it is too. The team have been busy, with several key new models and subtle changes across the board, bolstering an already strong brand that identifies well with a lot of UK cyclists.

After a year of prototypes, Genesis have officially unveiled the Volare, a range of four steel racing bikes. There’s the Equilibrium Disc with a 631 steel frame and fork, the Croix de Fer range gets a shiny 931 frame option, the Day One gets an Alfine Di2 8-speed hub, and there's the first indication they’re moving into the kid’s market with the new Col du Glandon 650b. There’s also a number of upgraded specifications and lower prices. 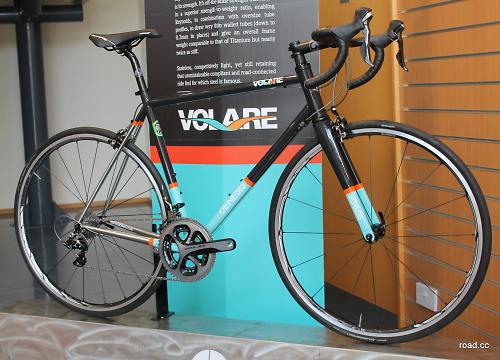 The race team have been instrumental in the development of the frame, and it’s their feedback that has dictated the changes in the year since Genesis first embarked on a their project to return steel race bikes to the peloton. The four bikes here represent version three, the changes that have occurred along the way including smaller diameter tubes to build in a little more compliance and a sloping top tube to reduce the weight a bit. The team found the early frames too stiff, so they’ve worked on tuning some of that out. 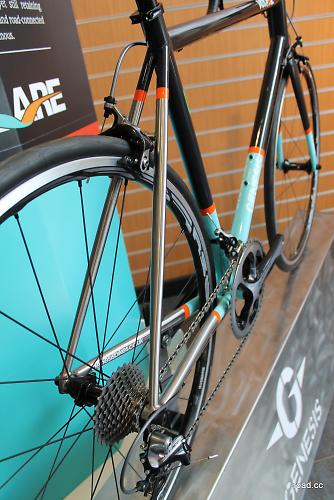 This is the range-topping Volare 953, as raced by the Madison-Genesis squad, with the same Enve Road 2.0 carbon fork. It has a full Shimano Dura-Ace 9000 11-speed groupset with a 52/36t chainset and 11-28 cassette. Shimano’s new RS81-C24 wheels are paired with 25mm Continental Grand Sport Race tyres (the team actually race 25 and 28mm tyres, depending on the circuit). Genesis branded handlebars, with a new compact bend, stem and seatpost look really smart and feature heavily throughout the range, with a Selle San Marco Concor saddle completing the build. Six sizes are available from 50cm to 60cm. 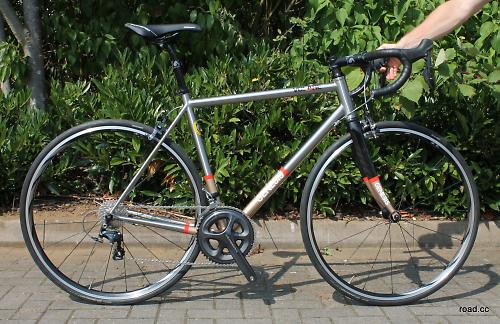 The Volare 20 is made from a Reynolds 931 tubeset, featuring the same geometry as the Volare Team. It also has the same 44mm head tube and Shimano PressFit BB86 bottom bracket. Shimano’s Ultegra 6800 11-speed groupset features with RS61 tubeless-ready wheels and Continental Grand Sport Race 25mm tyres and Genesis finishing kit. With its Reynolds 853 frame, a Shimano 105 10-speed groupset, RS21 wheels and Continental Grand Sport Race 25mm tyres, the Volare 10 looks a really smart package. It's a nice colour combination as well. The frame uses the 853 Pro-team top tube and down tube, which have larger diameter tubes with thinner wall thicknesses. 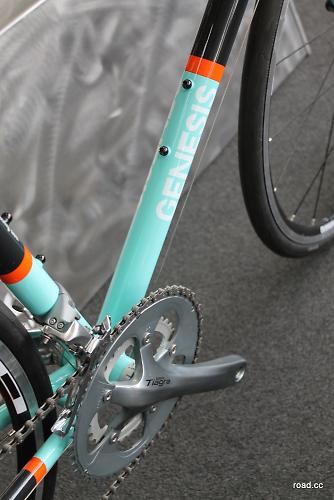 Genesis have essentially taken the Equilibrium, with the same geometry and handling characteristics, and built it out of Reynolds 631. That includes the fork. It has disc brakes, of course, in this case a set of Hayes CX Expert mechanical disc brakes with 160mm lightweight rotors. Genesis have been doing disc brakes on Croix de Fer bikes for some time, so it was only a natural step for the Equilibrium, a more road-orientated package, to be treated to discs as well. 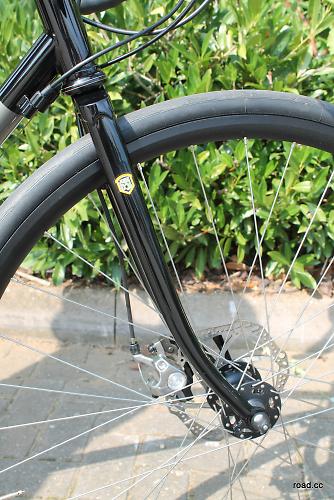 It’s a fine looking bike. The skinny Reynolds 631 tubes beautifully paired with the raked crown fork, also made from 631, and painted in sleek black, givesthe bike a purposeful appearance. Genesis have worked hard on the details - in fact, making subtle specification changes across the board is a key development this year - and made the smart decision to go the extra mile with the wheels: H+Son Archetype rims are laced to Shimano XT 6-bolt hubs (there just isn’t much choice for road-specific disc hubs at the moment) with double-butted spokes. With an updated frame, the Equilibrium Ti (£2,249.99) has been tuned to address some criticism that it was a little on the stiff side, findings echoed in Stu’s review late last year. So the main tubes have a smaller diameter to bring back some of the natural springiness of titanium, and the seatpost has been changed to 27.2mm, down from 31.6mm. There’s a new curved carbon fork which should help in the comfort stakes too, and Genesis have taken the decision to paint it black this year. Another key change is the uprated Shimano R451 long-reach brake calipers - the previous Tektro R317 brakes didn’t impress Stu when he reviewed the bike. The wheels have been improved, now with double-butted spokes and Alex Race 188 box-section rims saving about 30g. Quite a few key changes, then, and all with a £50 price drop. 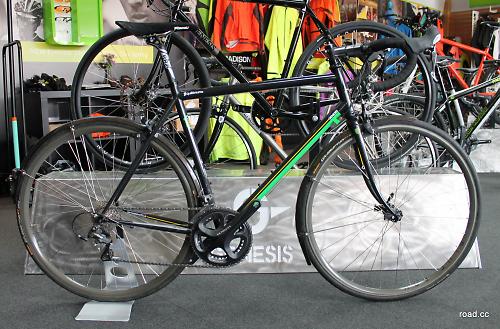 This is the Equilibrium 853, a bike that our Dave has already been riding. It’s only available as a frameset package (frame and fork only) costing £749.99. This is just an example build.

Check out this shiny Croix der Fer in the same geometry as the regular bike, it’s just been made from Reynolds 931 tubing. Combined with a Shimano 105 groupset, it costs £1,999. 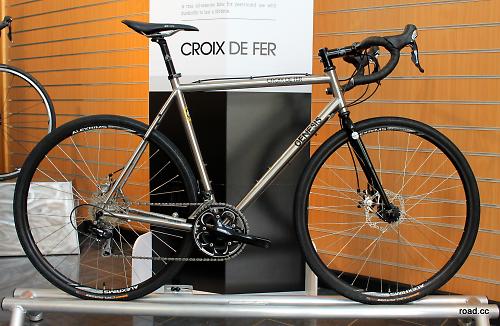 The bike has a double butted chromoly fork and space for 35mm tyres, plus rack mounts, making it the ideal bike for on- and off-road cycling, either as a fully fledged commuting bike or one for linking up roads with bridleways, byways and towpaths. If you like a bit of rough riding, this could be a great choice. 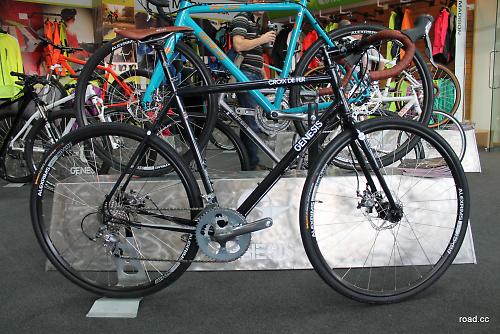 The new 931 model means the Croix de Fer range expands to three models, with the Reynolds 725 and 520 models carrying over mostly unchanged, aside from the introduction of a 50cm size for both and a £50 price cut for the latter. Both are a shade lighter in the wheels too. On the 725, the rear disc brake has been moved inboard of the dropout (it’s outboard on the 931) and there are lighter wheels and upgraded Hayes CX Expert brakes. They’ve also fitted a wide ranging 12-30t cassette and faster rolling Continental Cyclocross Speed 35mm tyres. 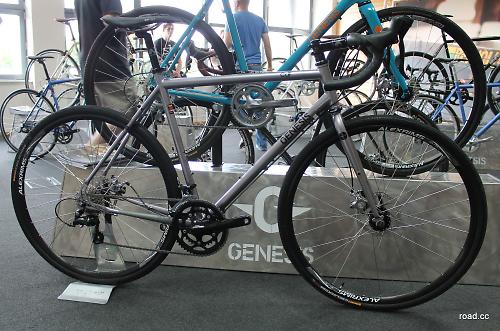 The CDF is mostly unchanged for 2014, but it is now painted in a new pewter colour, they've shaved 100g from the wheels and the price has dropped £50.

The Day One Alfine 11 has been replaced with the brand new Alfine Di2, with the price rising to £2,199 to reflect the upgraded gear. The Reynolds 853 frame and fork has been designed specifically for the Alfine hub and the Di2 wiring is routed internally, entering the top of the down tube and passing through the new BB86 PressFit bottom bracket (to provide clearance for the wiring) and exiting the chainstays just before the dropout. 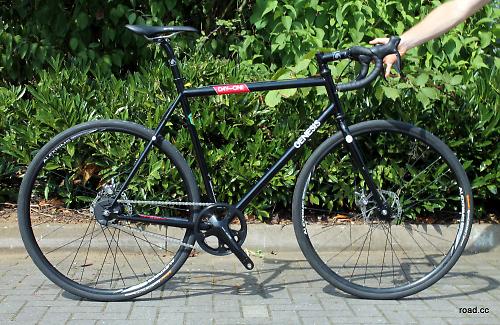 The Di2 battery has been hidden away inside the seatpost. Changing gear is via STi shifters, with the right hand brake unit controlling the hub. It’s a very slim brake lever hood unit, familiar to anyone who has used a regular Di2 groupset. Attached to the centre of the handlebars is a neat little LCD screen that displays your selected gear and remaining battery life. 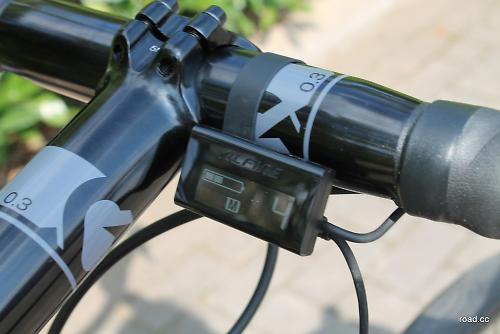 The Alfine chainset provides a 42/21t gear set-up and there are new Hayes CX Expert mechanical disc brakes with L1 lightweight rotors. Genesis have used Alex Volar 2.4 rims in the wheels to save 40g in the wheelset over last year’s model. The rims are also tubeless-ready and have a wider internal rim width, now 19mm, to support wider tyres. They’ve fitted Continental Sport Contact 32mm tyres.

The Day One Alfine 8 (£999.99) carries over from last year with a lower £999.99 price. One interesting change is the fitting of the J-Tek bar-end shifter. It’s a CNC-Machine aluminium shifter which, paired with the new Tektro RL340 brake levers, has meant they’ve been able to drop the Versa brake/gear shifters of the old bike. The shifting action of the J-Tek is extremely smooth and reassuringly solid, and we think will be a hit with anyone who buys this bike. 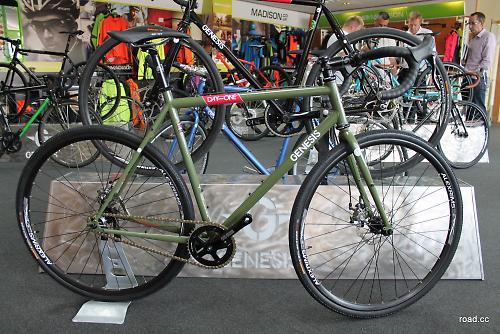 The Day One Disc (£699.99) gets a new lick of olive green paint on the Reynolds 520 frameset, and upgraded Hayes CX Expert mechanical disc brakes replacing the Avid BB7s on the 2013 model. The tyres have been replaced with faster rolling Continental Cyclocross Speed 35mm ones, and there’s wider profile Alex XD-Elite rims to better support the wide tyres. Signalling a possible intent to move into the youth market in future years is the Col du Glandon (£599.99). It’s a brand new model, available in just one 47cm size, aimed at youth riders and racers. 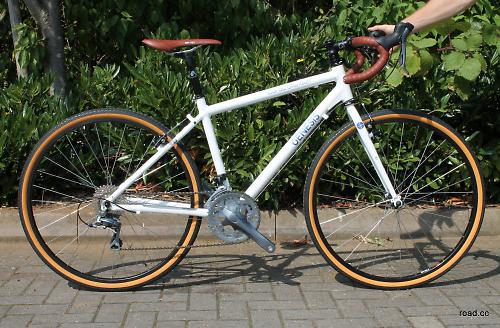 Genesis have gone with 650b wheels to future-proof it - the wheelsize has returned to the mountain bike industry and there’s a growing choice of tyres. The double-butted alloy frame is paired with a double-butted chromoly fork, and you get a Shimano Claris 8-speed groupset with a 46/34t compact chainset. 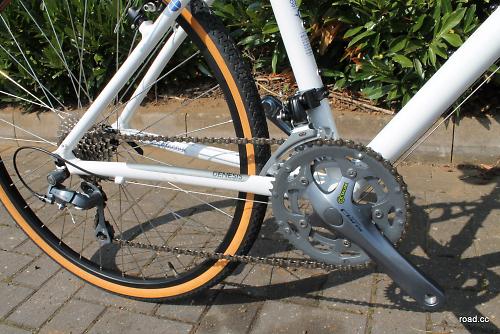 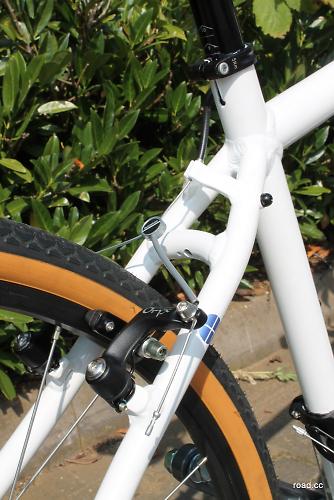 The Volant range, consisting of three models, has been tweaked for 2014, with a more sportive-friendly geometry. With the introduction of the race-ready Volare range, the head tube has been made a little taller across the Volant models. The frame is still made with a 6069 down tube and chainstays and 6061 top tube, seat tube and seatstays, which is intended to offer a little more comfort. 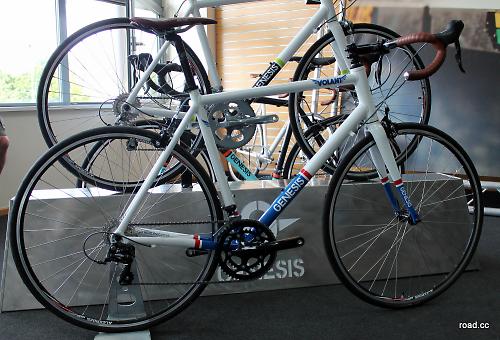 The Volant 10 here has dropped £50, bringing the price down to £749, with a Shimano Sora groupset. 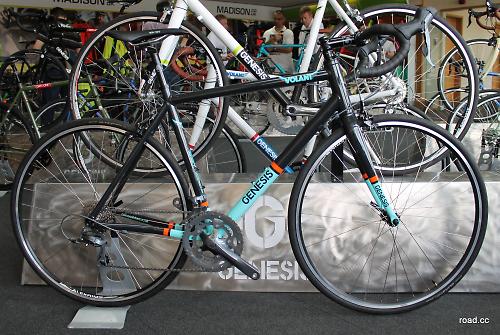 The entry-level Volant 00 is painted in Madison-Genesis replica colours and it’s now £50 cheaper than 2013 at £599.99. That gets you a frame with a Shimano Clairs 8-speed groupset, 11-30t cassette and upgrade Tektro R325 brakes, new compact bend handlebars and Madison Prime saddle.

Check out www.genesisbikes.co.uk for more details.