Shimano are extending their range of Di2 electronic shifting for 2013 but not in the direction you might think; next year, the Alfine city/touring groupset goes electric. The Japanese component giants are also revamping their Sora road and Tourney ranges, improving their road mechanical disc brakes, and offering new light-action pedals. 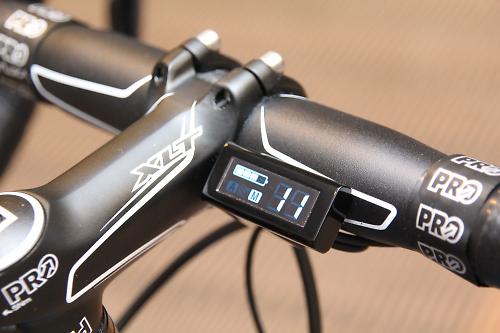 So, the next Shimano groupset to get the electronic treatment will be Alfine. Who’da thunk it? Not us. After they introduced first Dura-Ace and then Ultegra Di2 options over recent years, we thought Shimano would trickle the technology down another road bike level to 105 next, or maybe take it over to the mountain bike world… but they’re not doing either of those things in 2013. If you saw Alfine Di2 coming, award yourself masses of bonus points.

Just in case you’re not up to speed, Shimano describe Alfine as, “The premium component group for City Touring with a stylish look and a wide-ranging gearing of internal hubbed gears.” 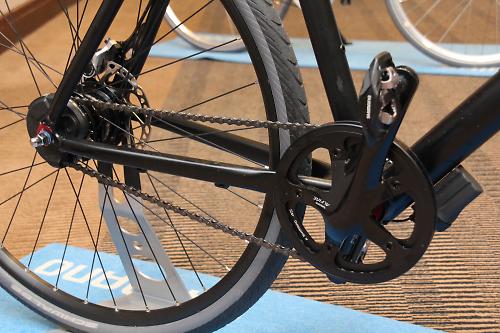 What’s the rationale for adding electronic shifting? We’ll allow Shimano to take up the story. Apparently, the advantages are clear to everybody…

“The advantages are clear to everybody: changing gears becomes easier, it gives a clear feeling and it is more durable than mechanical shifting. Shifting becomes more reliable and faster simply by touching the shift buttons. Shifting gears while standing on the pedals is no problem for the internal geared hub.

“The electronic switch offers easy access, short strokes and a lighter shifting effort. Next to the switch is a minimum information display that indicates in which gear you’re riding and what the status is of the battery life. 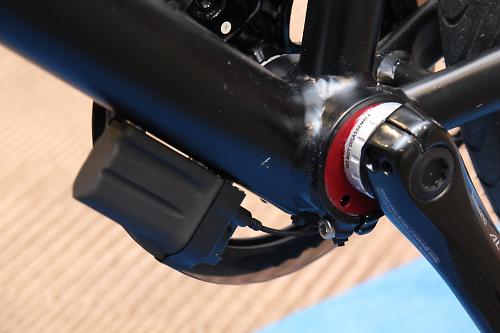 “The compact shifters provide a clean look on the handlebar. By the compact size it’s possible to grip the handlebar firmly and has less change to be damaged by hitting. Another durable advantage is that an electric cable does not stretch compared to the mechanical version. Naturally the cables are waterproof.

So, there you go, straight from the horse’s mouth. The technology used for Alfine Di2 is more similar to Ultegra Di2 than to the original Dura-Ace Di2 – it uses the same E Tube wiring – and, like mechanical Alfine, it’ll be available in both 8-speed and 11-speed versions. 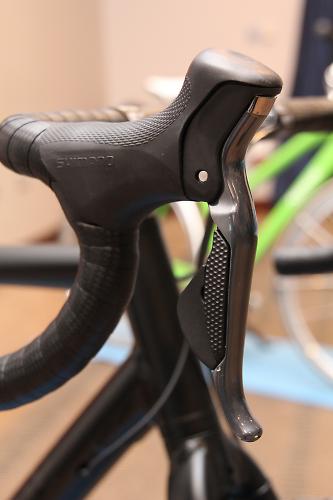 The other big development is that with Alfine Di2 you get the choice of either flat-bar shifters or STi shifters for drop bars, where the gear shifter is integrated into the right hand brake unit. This isn’t an option that’s currently available in the mechanical Alfine line-up so it opens the groupset up to another range of possibilities. You can now have an internal-hub racy road bike, if you like, fully Shimano equipped.

The body of the STi shifter is very slim. Shimano have reduced the diameter from their current road ranges for improved ergonomics. The shifters we were shown at the recent product launch weren’t quite the final versions, but we’re told that these are pretty close (although there’s no need for a shift lever on the left-hand unit). An optical display on an LCD screen will tell you which gear you’re in.

Shimano and now Campagnolo have gained a foothold for electronic shifting in the road bike market very quickly, but they have a ready-made publicity machine in that sector in the shape of the pro peloton. Many of the fastest riders in the world are using electronic shifting and that’s a massive boost.

How are they going to convince city riders and tourers to make the switch? It’ll certainly be an interesting one to follow. 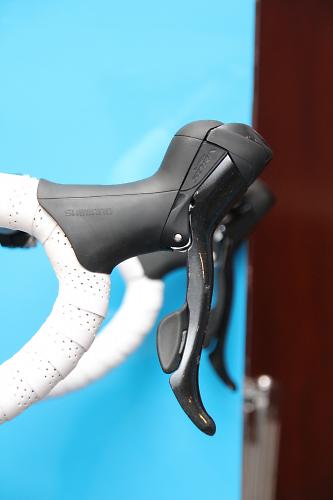 Shimano usually give at least one of their road groupsets a major upgrade each year and this time it’s the turn of Sora. If you don’t know, Sora is Shimano’s fifth-level group (after Dura-Ace, Ultegra, 105 and Tiagra). 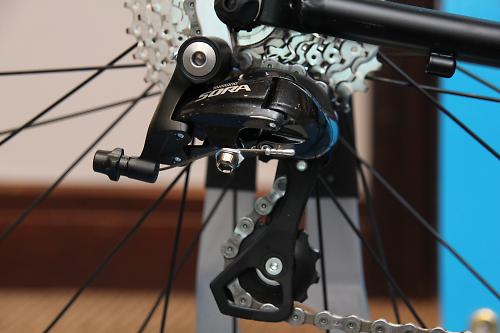 So, what have Shimano done here? Well, quite a lot, actually. Previously, changing gear via Sora shifters involved swinging the brake lever to the side – as with Shimano’s higher level ranges – but also using a little thumb lever on the inside of the STi shifter body. 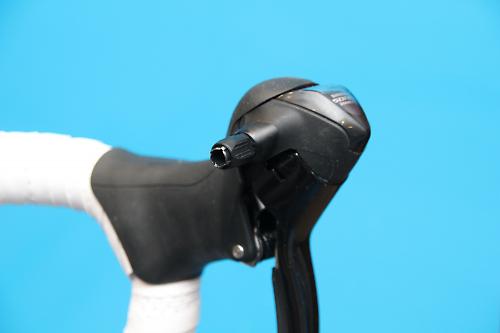 Some people couldn’t get on with that thumb lever, finding it hard to get at when riding on the drops. Now, Shimano have removed it, and substituted a lever that sits behind the brake lever. This brings Sora into line with the more expensive Shimano options.

Shimano have also broadened out the Sora range because they don’t want it to be a road bike group. They’ve brought in mountain bike-style Rapidfire Plus shifting options for flat handlebars – with optical gear displays, like the STi levers – and wider gear ranges than before.

Sora stays 9-speed but the largest sized sprocket it can handle is increased to 30-tooth (more on that below); there will be an 11-30T cassette for a super-wide range of ratios. There is a new chainset option too, with a 46-34T chainring combo that’s designed for both flat handlebar bikes and for cyclocross.

The flat-bar brake levers are compatible with different Shimano brake options. There’s a little ‘mode converter’ in the lever that you move to switch between V-brakes/mechanical mountain bike disc brakes and road callipers/mechanical road disc brakes/cantis.

The final things that Shimano have altered in the Sora group are the hubs. They’ve been upgraded with better sealing than before and the rear hub shell can now handle significantly more torque. Oh, and the 2013 Sora groupset be available in black only – Mica Black, to be precise. Tourney is an existing name in the Shimano world but they’re turning it into a bona fide road groupset for 2013. The entry-level Tourney range will feature 7-speed STi shifters with a thumb lever on the inside face of the body. There’s a reach adjusting screw on the levers too. The chainset will come in a compact (50-34T) configuration while the rear mech can handle sprockets from 11T to 28T.

Shimano have redesigned their road mechanical disc brakes for 2013 and they reckon they’ve stepped the performance up significantly.

According to Shimano’s figures, the BR-R515 road disc brake, which is roughly an Ultegra-level product, has 30% more power than the current BR-R505. They’ve also brought the profile down by 20% so it’s lighter – it’s now 181g – and less likely to take a whack.

Shimano are introducing a new range of light-action clipless pedals called Click’R. They have much less spring-tension than the existing pedals in the line-up: Shimano reckon it takes 60% less force to step in and 50% less force to unclip. We gave them a quick go and it certainly feels a whole lot easier to clip in an out. 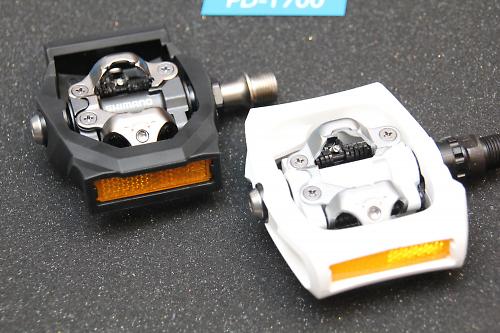 Aimed at leisure riders, these use the SPD (mountain bike/recessed cleat) system rather than the SPD-SL (road) format, and the pedals are dual-sided with a pop-up cage. The pedals come with built-in reflectors and Shimano say they’re best matched to their existing CT and UT leisure shoes. 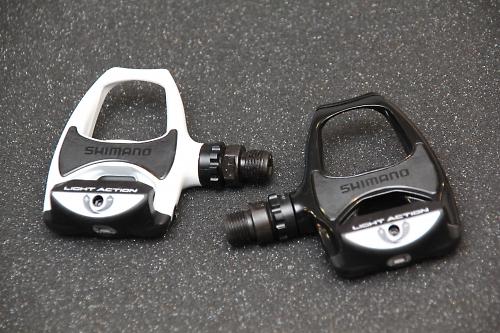 Shimano are also launching a light-action road pedal that fits in the Tourney (see above) groupset. This one uses the SPD-SL (road) system and it’s called the PD-R540-LA – the LA bit standing for ‘light action’.

We’ve touched on this already but Shimano are making a big thing of increasing the range or several of their rear mechs in 2013. SRAM have been doing exactly the same thing recently with their WiFLi technology that allows you to fit a sprocket as large as 32T and get some super-low climbing gears.

Shimano made the jump up to 30T with 105 last year and 2013 Ultegra and Sora rear mechs will be able to handle sprockets of that size too.

Next year’s 105 and Tiagra rear mechs will go even further. You’ll be able to run an 11-32T cassette with either of these groupsets with a compact chainset fitted up front.

We’ve no prices to give you on any of these products yet. We can tell you that they’ll start coming through this summer with the arrival of electronic Alfine chalked up for September.

For more info on Shimano products go to the UK distributor Madison.