We've finished building our new Genesis frame in time for some Audaxy fun on the weekend.....
by dave atkinson

Okay, it's not really just in. We nicked it from Icebike a couple of weeks back, and the last time it was seen on these pages it was only half built. But now it's all up and together, and ready to take on the 214km Barry's Bristol Ball Buster Audax on Sunday, which will be its first real test. Here's what we did. 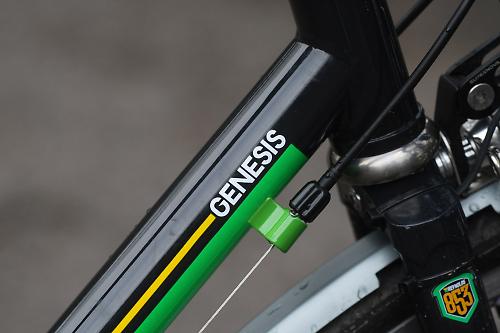 For those of you that have been living under a rock for the last few years, the Equlibrium is a modern steel classic. When we first reviewed it three years ago, our man Stu called it a "Superb handling super-versatile bike built for British conditions". That was the first incarnation, made from humble Reynolds 520 tubing; later versions were upgraded a bit to Reynolds 725 which is heat treated instead of cold worked for a higher tensile strength. There's a Titanium version too. And now this one, made from seamless, air hardened, heat treated Reynolds 853. Unlike the cheaper steels, 853's strength increases in the weld areas during cooling, and the tensile strength of the steel is higher again. This means thinner walls can be used throughout the frame for a lighter structure.

When Genesis first made the Equlibrium, they didn't have the Volare race bike in their range. The bikes aren't the same by any means – the Volare is designed to be a super-stiff race platform while the Equilibrium is more of a comfort distance machine – but there's more crossover between the two than there ever was between the Equilibrium and the Aluminium-framed Volant. That's maybe what's decided Dom at Genesis to spec the 853 frame with a matching, lugged, 853 fork. That makes it a very obviously different beast to the Volare. The frame geometry and profiles are just the same as the others; that means our 58cm frame has an effective top tube of 567mm, a head tube of 160mm, a 72° head angle and a 73.5° seat tube. That head tube doesn't sound very long but bear in mind there's a bit of extra length in the fork to accommodate the mudguards. Even so, it's less upright than some other, puportedly more sporty, bikes we've seen recently.

An Audax, for the uninitiated, is a better sort of sportive with masses of cake that costs a fiver. Look it up. Let's be clear: the Equilibrium has always been a fantastic bike for Audax. It's responsive, comfy and fairly light, with room for full mudguards. But a steel frame with a matching steel fork is proper Audax territory. Anyway, that's how we've built it. The aim is to roll it out for a nice friendly 200k this weekend and build up to a not-quite-so-nice 400k at the start of May. That'll be the longest ride I've ever done ever. The transmission is dependable old Shimano 105. In the performance-versus-value equation it's the gear that gives the best balance, in my opinion. You get the trickle-down tech from Dura Ace and Ultegra, including the lever profiles and under-tape cabling, and the mechs also borrow heavily from the more expensive units. It's all a bit weightier, but it's a darn sight cheaper, and it lasts really well. 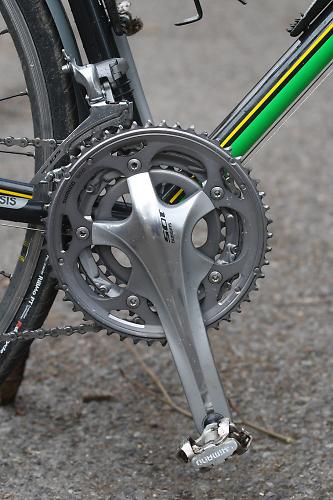 Also it's available as a triple. I've gone for the triple here, with an 11-28 cassette. That's more or less the same as a 50/34 compact with a wider cassette, but the jumps between gears are smaller and that's nice when you're tapping out a steady cadence on a long ride. Also it means you don't have to try as hard, as everyone assumes you'll be a plodder. Suits me. Wheels are handbuilt, with a Shutter Precision PV-8 dynohub and a Halo Spinmaster rear on Mavic Open Pro rims. They're 32-spoke, so they're strong enough for heavy use without being particularly heavy wheels. The tyres are Panaracer RiBMos in a 28mm width. There's plenty of room for them even with full mudguards. The mudguards in question are from Portland Design Works, they're called the Full Metal. Can you guess what they're made from? Yup. Aluminium, in fact. They were pretty easy to fit although the rear brake mount loops over the top of the calliper, something we've not seen. There's a single stay front and rear rather than two, but they're pretty beefy and the guard itself is quite stiff too, so they don't rattle about. 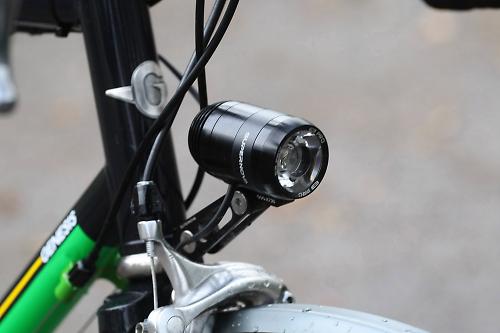 A dynamo hub means dynamo lights, and I've got a Supernova E3 Pro 2 system on the Equilibrium. As dynamo lights go, they can't really be bettered. The beam shape is more or less perfect for the road and they bat out enough power to see you right through the night. 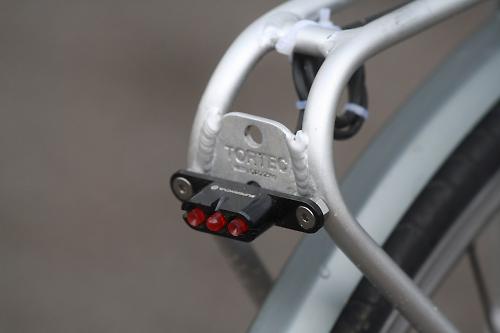 The rear light is designed to be fitted to the mounting plate on the back of a rack. Our low-profile Tortec Velocity rack didn't have a full light mounting plate as it's too narrow, so we drilled and tapped some holes in the back and screwed it in directly. I've probably invalidated the warranty but hey, it looks really neat. And I'm not planning on scaling the Karakoram Highway or anything, the most I'm likely to load it up with is a single pannier. I'm only running one of the two top mounts as well but it's plenty sturdy enough for the job even then. 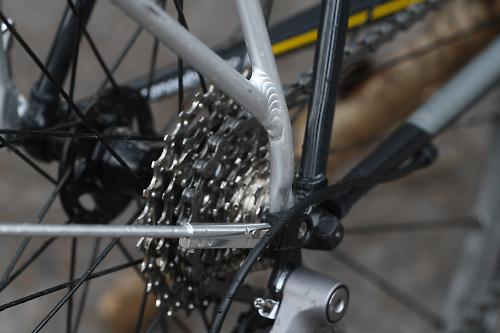 There's just one eyelet at the dropout so rack and 'guards have to share. So long as you fit the rack closest to the dropout it's rarely an issue, especially with light loads. A dab of threadlock helps to stop the whole thing working loose. 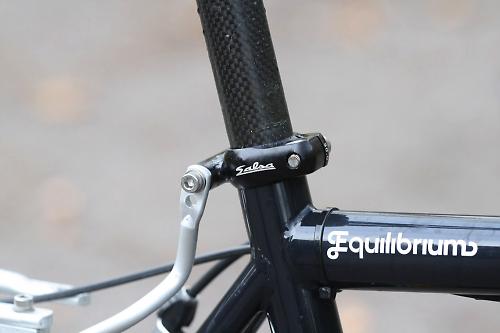 The Equlibrium doesn't have seatstay rack mounts. That's sort of fair enough on the more sporty, carbon forked, full bikes but a bit of an oversight on this all-steel beauty, I reckon. No matter: I've swapped out the seat collar for a Salsa one with integral rack mounting points. It works a treat. The other thing the dynamo is running is a USB port, The Plug from Tout Terrain. It sits on top of the stem and all the electronic gubbins are hidden inside. It comes with a special expander bolt with a gap for the wire but it didn't fit in any of the forks I tried; in the end I just took a Dremel Multi to the star-fangled nut and cut a couple of the star-fangly bits back a bit to give the wire room to weave through. The bars and stem are Zipp Service Course SL, the higher spec of Zipp's two alloy Service Course ranges. The 44cm bars are short and shallow for a nice easy drop postition. The stem I might have to swap out for a 120mm, at 110mm it feels just a smidge too short. The bar tape is some comfy black synthetic stuff from Pro and I've slung a black saddle on because my Charge Spoon didn't match. I'm busy persuading Charge that they'd like to make me a custom one with a black top and a green and yellow base. Here's hoping.

Before you pick me up on the saddle angle, that's just the way I like it. You're wasting your time and Audaxes aren't UCI-sanctioned. Put your spirit level away. 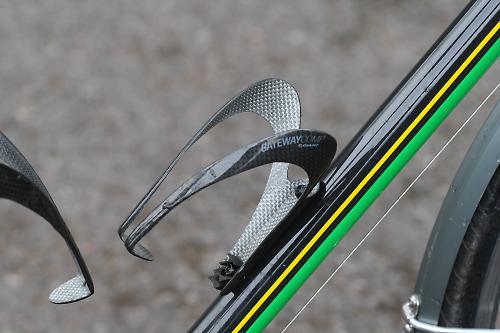 That's about it, really. I've put two carbon bottle cages on it, not because carbon is necessary there but because they were the only two matching cages in the parts drawer. The full bike with all the trimmings weighs in at 11kg on the nose without pedals, or 24.25lb in old money. The frame and fork will be available very soon and they'll cost you £749.99.

We're all set. Except I'll be rocking a bar bag, natch. Roll on Sunday.