Despite the attention shiny carbon gets, urban bikes dominate
by TR McGowran

Road.cc's man about town TR McGowran takes his first look throught the halls of Eurobike while the exhibitors are still setting up to see what catches his eye, before the shroud of marketing, make up and the bright lights are applied.

The halls of Eurobike are vast and the number of bicycles is almost overwhelming, there are thousands of them, and a lot of them a very, very similar indeed. Before this bicycle shaped blindness kicks in I did a run around and snapped what caught my eye, the stuff that I want to see more of.

Electric bikes are everywhere, it is like a scene in a science fiction film where people sat upright are moving along in a chaotic fashion making the noise of a hand whisk. But they also try to look like something that comes from the future and that doesn't really work for me; they look daft and plasticy. Even Barbarella couldn't make them look sexy. 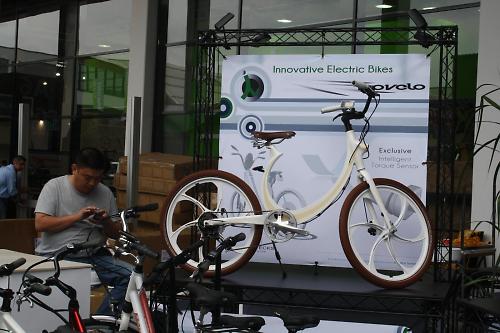 We’ll have a full gallery later of electric bikes that are more appealing to cyclists. What do you think of this one? What I would like to find more of are electric bikes which take advantage of the help a motor can give you, not just to over come laziness, but to shift weight. This KTM e-shopper, hidden in the middle of their stand is a good example of how a bicycle can be a viable option to get your groceries home. Among a sea of process blue and kelly green my eyes still managed to get snagged by the aggressive neon colours painted on the shiny skin of a pretty shoe. The most abundant retina burning colour to slip your feet into is green. They will probably match your new carbon sled but unless you are dressed all in black you might look like an extra for Joseph and his technicoloured goretex. 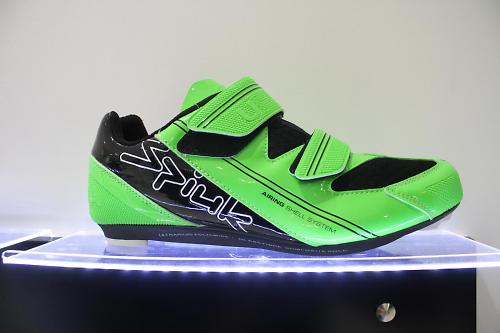 It looks like whatever you are riding in or on, you will be a able to get a helmet to match. Tsg had pretty much a lid with every kind of finish on. The gold metallic glitter helmet is my bet for being super popular. Basil pretties it up

Apart from the PR girls and the buff chiseled calves of all the cyclists or the polished lugs on steel frames there isn't much 'pretty' going on. The Basil stand always make up a good display though, bringing an arts and crafts feel and home comefort into the fairly industrial landscape of the exhibition halls. For a moment I thought that they had teamed up with Cath Kidson, the female equivalent to what camouflage is to men (in my opinion), using a very repetitive floral patern, maybe a closer resemblance to a William Morris wallpaper. A few years ago we saw belt drives getting re-introduced in a big way. Belt drives have advantages over a chain that suit urban bikes: they are clean and require next to no maintenance. But they have only been found on expensive bikes so I was happy to spot a budget single speed with a belt over in the Taiwan isles. This indicates mass production is set up for the hubs and the coupling that allows the rear seat stays in the frame to open and pass through the belt. I haven't spotted a bike made entirely of wood, yet, neither have I caught a bamboo bike in the wild but there are many wonderful things made of natural materials that I am hoping to discover. These bamboo mudguards from Brick Lane Bikes are a nice touch. With the buffer memory almost full in my eyeballs for one day, the final thing to catch my eye was a wheelbarrow. It is a very nice wheelbarrow don't you think? 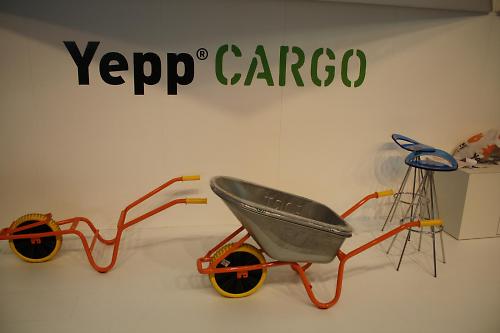