This Pinarello Dogma 65.1 Think 2 belongs to Ivan Gutierrez of Team Movistar, but it’s practically identical to the one that Rui Costa rode to a triumphant victory on stage 16 of the Tour de France yesterday, after attacking a large breakaway group on the final climb of the day. 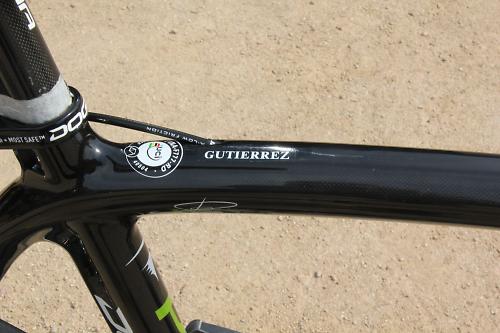 Pinarello sponsor two teams in the Tour de France, giving them two bites at the prize cherry. Movistar ride the same Dogma 65.1 Think 2, the latest model of the company's flagship racer, as Team Sky. Rather than the all black finish with nearly no colour of the Sky bikes, the Movistar bikes have some nice yellowy green detailing going on inside the main triangle and fork legs, with white paint on the inside face of the rear stays. 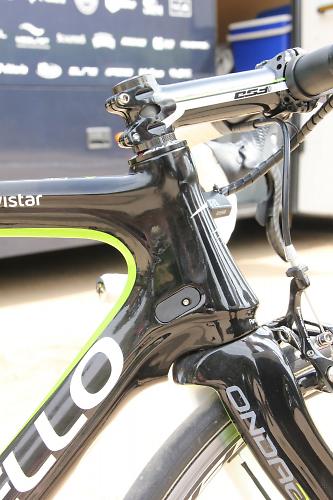 The brief with this latest Dogma was to make it stiffer, and Pinarello achieved that by using a 65-ton Torayca 65 high-modulus 1K Nanoalloy Carbon, which has a higher strength-to-weight ratio. The Dogma 2 used 60 Ton carbon fibre. It still has the distinctive wavy forks and seat stays and muscular shaped head tube. You're either a fan, or you're not. 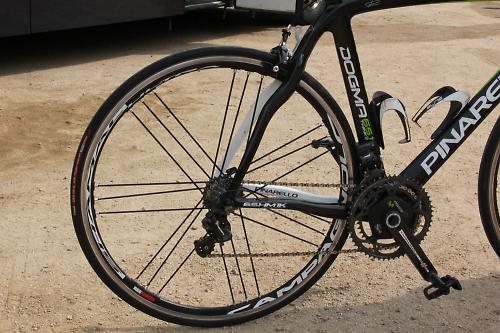 Most Campagnolo sponsored teams are opting for the Record EPS 11-speed electronic groupset, a step down from Super Record. The cranks have Movistar branded SRM PowerMeters installed, we can’t recall seeing any other custom team branded SRM’s on other bikes. The rather large battery for the EPS groupset is mounted on the belly of the downtube, just by the bottom bracket. 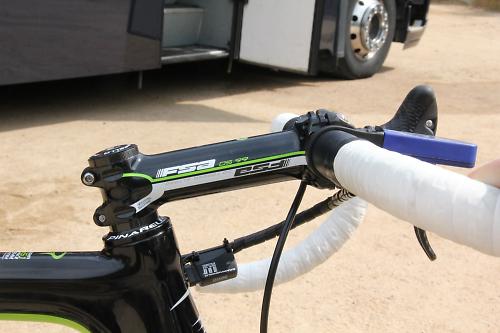 FSA have a huge presence in the pro peloton and they feature heavily on the Movistar bikes. The OS99 is a popular stem choice, which uses a carbon outer structure bonded to an alloy core, to create a stem that weighs just 128g (11cm). Most riders have at least a 12cm stem in the peloton, and more often than not a 13cm item. This one isn’t slammed, instead there’s a generously sized spacer above and below the stem. The handlebar is an FSA Energy New Ergo model. 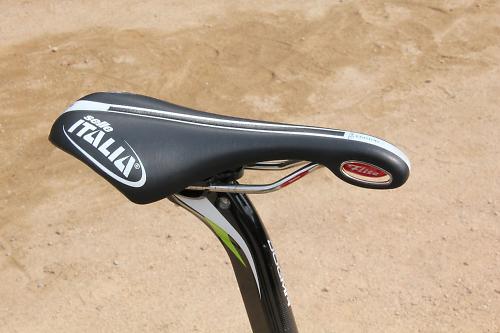 Atop the carbon seatpost is a Selle Italia Flite, a rare sight in the peloton. Notice how the saddle is pushed right forward on the rails? Oh, I should point out that these are FSA's new special edition green conponents, which they released at the start of the Tour. 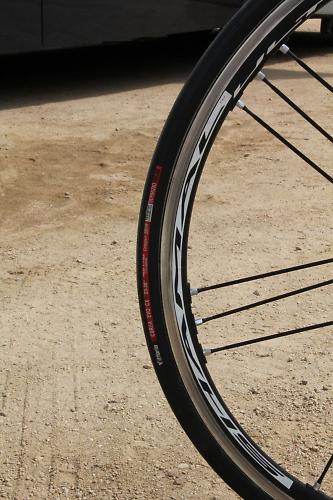 Wheels are from Campagnolo too, with the 50mm deep-section Bora’s the most likely choice - although not on Ivan Gutierrez's bike pictures above - although they could have been his training wheels when we photographed the bike in Corsica as teams and riders made final preparations.

While we have seen a noticeable trend towards wider 25mm tyres with some teams, like Team Sky, Movistar are resolutely old school with 23mm Vittoria Corsa Evo CX  tyres. 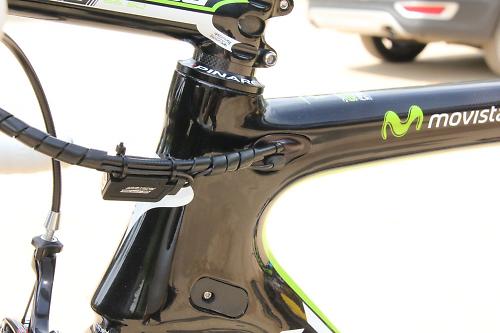 The EPS wiring is helicoil wrapped to the rear brake cable where it exits the top tube to keep it tidy. 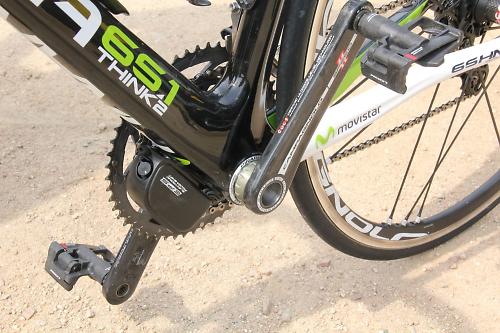 The Dogma has what is considerably a rare sight in the pro peloton this year, an external threaded bottom bracket. Most manufacturers have moved to PressFit bottom brackets as the lack of an alloy insert saves weight, and allows a large axle diameter for the cranks.

Don’t forget you can see all the Tour de France team bikes in once place right here.

1
Cyclist arrested after police force rider off M3 motorway
2
Near Miss of the Day 767: MGIF driver cuts across cyclist at speed on roundabout
3
“Maybe the easiest race I’ve ever done”: Pros enjoy relaxing Giro d’Italia stage six… but could you have kept up?
4
Near Miss of the Day 768: Driver squeezes between two cyclists – but only receives warning letter as rider didn’t “swerve”
5
What happens if you put a giant propeller on a bike? Plus new stuff from Rapha, Campagnolo, Ritchey, Selle Italia, Lezyne + more
6
Near Miss of the Day 769: Punishment pass
7
Top American gravel racer shot dead in Texas
8
World Championships in Harrogate "catalyst for ill feeling", says organiser hoping to revive Tour de Yorkshire