Mat and Tony are in Corsica ahead of the Tour de France, and have been snooping around the team hotels checking out the latest bikes and kit on display. They had a good look around the Team Sky set up, and took a very close look at Geraint Thomas' Pinarello Dogma 65.1 Think2 and Vasil Kiryienka's Bolide time trial bike (which is the same as Chris Froome will ride), as the mechanics made final preparations before the start on Sunday. 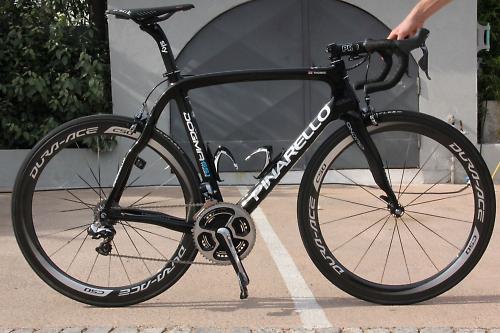 The Welshman will be in a supporting role for Chris Froome, and will be doing so aboard Pinarello’s latest Dogma 65.1 Think 2. It was actually introduced at the Tour de France last year, but Team Sky were reluctant to switch over from the previous Dogma 2 without more time to get used to it, Wiggo only rode it on the final stage. This year however the entire team are on the latest bike. 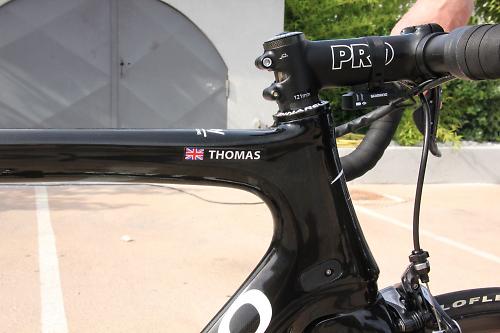 Geraint Thomas is 6ft (1.83m) tall and rides a stock 56cm frame, with a custom 121mm Pro stem giving him his desired reach. He runs his Fizik Arione saddle quite far forward on the setback seatpost as well. There’s just one 5mm spacer under the stem, and another above, giving him some scope for adjustment. 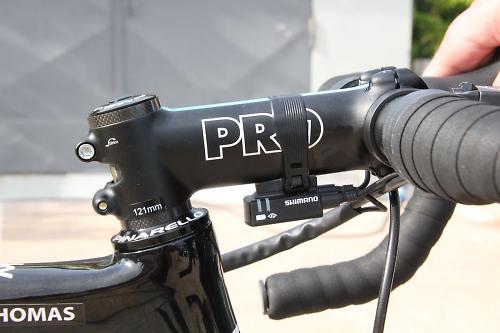 The brief with this latest Dogma was to make it stiffer, and Pinarello achieved that by using a 65-ton Torayca 65 high-modulus 1K Nanoalloy Carbon, which has a higher strength-to-weight ratio. The Dogma 2 used 60 Ton carbon fibre. It still has the distinctive love-or-hate wavy forks and seat stays and muscular shaped head tube. 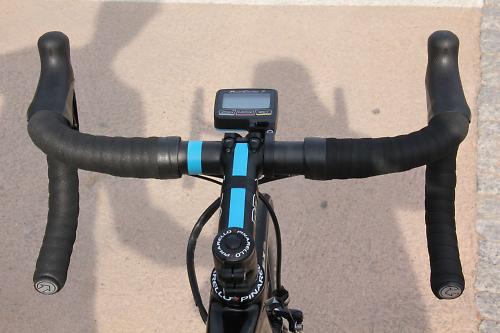 There’s very little Sky branding on this bike compared to previous Team Sky bikes, which have had generous swathes of corporate branding splashed across the frame. It’s rather muted in an all-black finish, with the only dash of colour a blue stripe on the stem and the 65.1 digits on the seat tube. 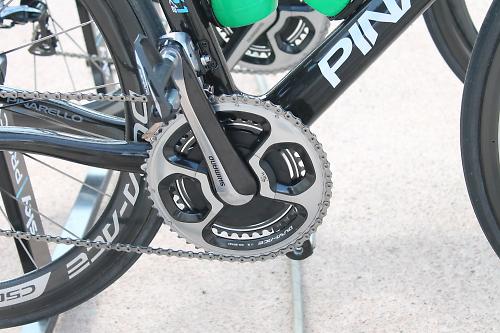 It’s an all Shimano drivetrain and rolling stock. A Dura-Ace Di2 9070 11-speed groupset with the latest SRM Powermeter crankset. Wheels at the time of taking this photograph are Dura-Ace C50 tubulars, fitted with 25mm Veloflex tyres. 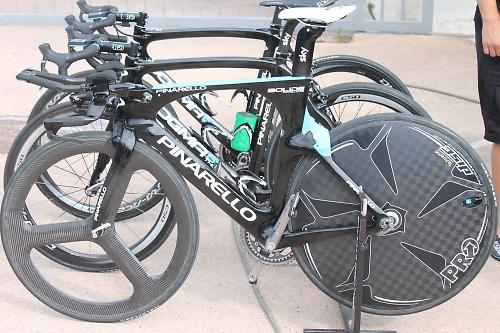 There was much hoorah when Pinarello launched the Bolide, and it made   short but dramatic debut at the Giro. Then Pinarello stunned the cycling world by releasing a second top-end time trial bike, the Sibilo. It appears they have developed the two bikes at the same time, the Bolide with input from Team Sky, and who are exclusively riding it. The Sibilo will be ridden solely by Alex Dowsett’s Movistar squad. 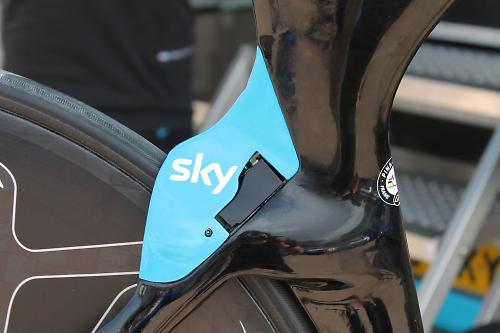 The Bolide is quite a looker. Grabbing the attention the most is the complete integration of the brakes, hidden under covers keeping the front and rear brake calipers out of the airflow. We’ve had a good look at the UCI’s rules and it appearings fairings over brakes are allowed, but there’s few other manufacturers, aside from BMC, who do anything along these lines. The front brakes is hidden by a fairing (though we probably shouldn’t call it that) which extends in front of the head tube. The rear brake is located on the seatstays. 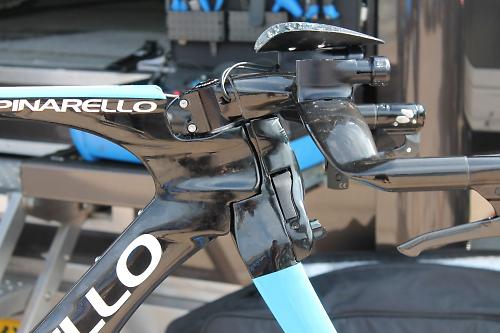 The tubes are all airfoil shaped and the concave back seat tube very closely follows the rear wheel. Cables and wiring for the Shimano Di2 groupset are routed internally to reduce drag. 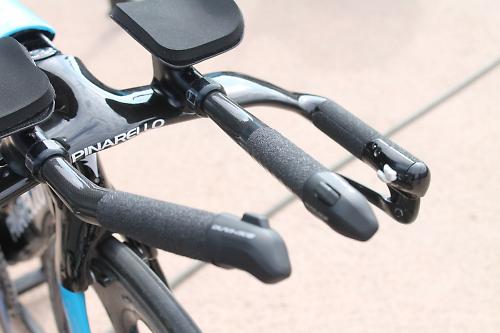 Pinarello also developed their own handlebar, which is incorporated into the stem for maximum aerodynamic performance. The electronic controller for the Di2 groupset is concealed inside the bars, and the shifter buttons are integrated into the handlebars too. 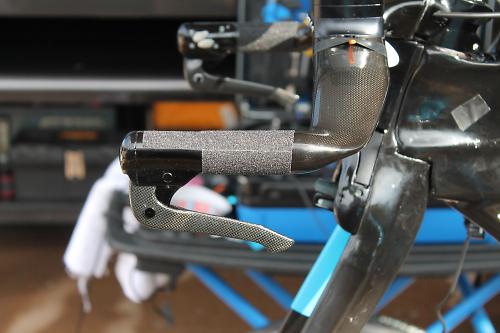 Pinarello say that the Bolide maintains the frame stiffness of the Graal with a tapered head tube (1 1/8in at the top, 1 1/4in at the bottom), asymmetric chainstays (an existing feature of Pinarello bikes), and an oversized BB86 bottom bracket. They use Torayca 65HM1K carbon fibre that’s been laid up for rigidity with reinforcement in high-stress areas. 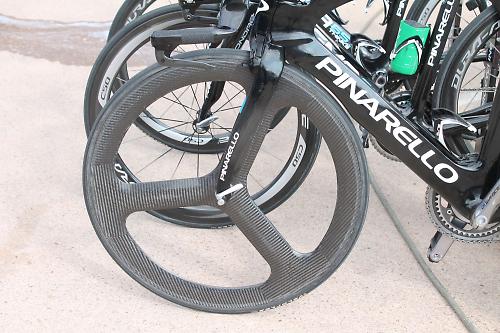 The Bolide is seen here fitted with a PRO disc on the back, and an unbranded tri spoke front wheel. We’ve seen Team Sky using this front wheel a few times in the past, sometimes marked up with ‘PROtotype’ branding, and sometimes plain such as this example. They’re most likely HED’s H3C Deep wheel, a 930g full carbon wheel with a 90mm deep rim. 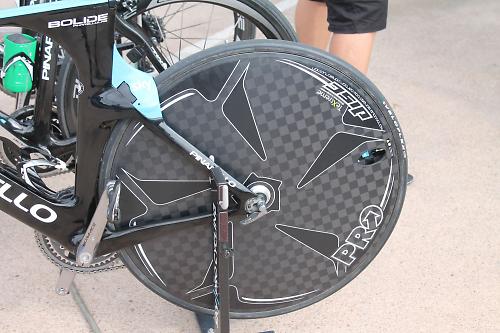 Loads more detailed photos of the Bolide time trial bike in this gallery.