We’re still discovering newly launched products at the Tour de France, and Louis Garneau have released a new aero road helmet, the Course. It’s their first aero road helmet and it's being worn by Team Europcar. Keep your eyes peeled for Thomas Voeckler when he goes on the attack, and you'll see this new lid. Unlike other aero helmets like the Specialized Evade, Kask Infinity and Scott Vanish, the designers at Louis Garneau worked to reduce the buildup of frontal pressure by designing vents to channel all the airflow through the helmet, rather than pushing the air around the helmet. They used Computational Fluid Dynamics software, and confirmed the findings in the Canadian National Research Council’s Low Speed Wind Tunnel Facility, to shape the vents in the helmet in a way they reckon passes air through the helmet more quickly. 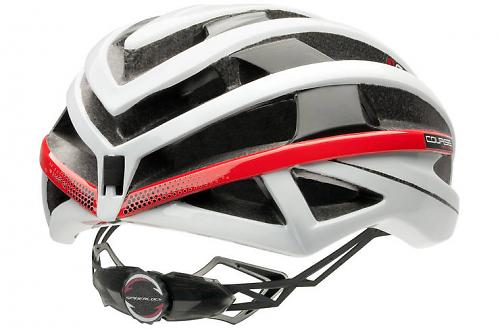 They say the inside of the helmet has been aerodynamically shaped too, to encourage the air to flow through and out the back. There’s an ‘inner-nerve system’ moulded into the EPS liner that helps to channel the air without restriction, guiding the air to the back of the helmet. There are additional ‘evacuation channels’.

Is the Course aerodynamic then? Louis Garneau claim that the Course is 2:40mins quicker over a 40km route compared to a regular road helmet, and 1:58mins quicker over a competitor's aero road helmet, though it must be pointed out they don’t say which helmets they actually used for the comparative testing. We're really curious aabout that because that's a considerable saving. And the manufacturers of the other aero helmets are all claiming that theirs is the fastest, obviously...

Louis Garneau call this ‘real-life aerodynamics’ because the helmet offers ventilation that most non-professional riders will still seek in a helmet. They say that they wanted to offer improved aerodynamics without sacrificing the issue of heat management and ventilation. From a safety point of view, Super MSB Technology is a ring-shaped protection belt around the base of the helmet that ensures structural integrity is high in the event of a crash. That ‘inner-nerve’ system also works to distribute shock, and the straps are integrated into it. 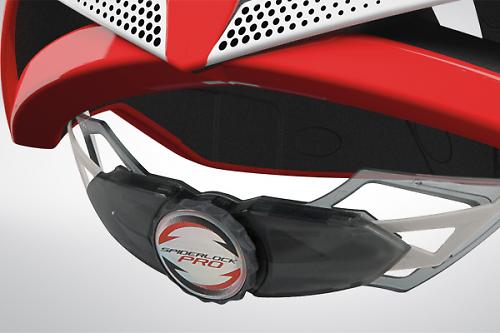 The Spiderlock Pro II retention system uses a rotary dial for adjustment, and there’s a neat LED built into it for nighttime visibility.  Quick-drying Static XT2 padding lines the helmet.

It’s not the lightest helmet at a claimed weight of 250g, but it’s a reasonable weight. Three sizes will be offered (S,M and