There’s a lot more noise surrounding the development of e-Bikes these days, and nowhere was this clearer than when we visited Eurobike in Germany last year, there were hundreds of them. Giant has been developing its own line of e-Bikes, we were impressed with the Twist when we reviewed it last year, and this week launches two brand new models, the Talon 29er Hybrid and Roam XR Hybrid.

They both have the same 360Wh Li-Ion battery, which can offer a range of up to 50 miles, at their core. On both models the battery is the large rectangular unit bolted to the downtube. Battery technology, as with electric cars, is the big hurdle that needs to be overcome if e-Bikes are really to realise their full potential. They’re getting smaller and longer lasting though, and with companies like Bosch and Panasonic getting in on the act too, we expect to see some even more rapid changes in the next five years.

Both bikes delivery the juice from the battery to the SyncDrive, a 250W motor housed in a large hub in the rear wheel. It's a more advanced and integrated design than Giant's Twist e-Bikes. Power is controlled via a grip throttle, much like on a motorbike or moped and there’s also what Giant dub a RideControl LCD display unit to keep track of your speed, remaining range and other vital stats. The 36V bolt is removeable to make for easy charging, and can be locked to the downtube. It has a handy LED charge indicator. 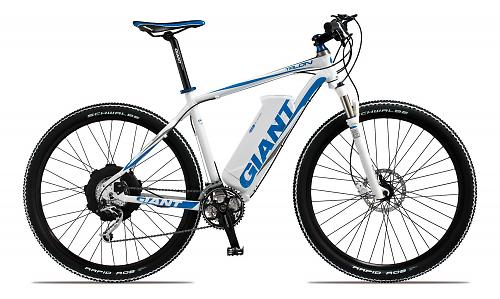 Giant’s new offerings share the same wheelsize, the Roam is designed for the road with slick tyres and a short travel suspension fork, while the Talon has it eyes set more on the off-road market with a RockShox XC32 TK 29 80mm fork and knobbly tyres. Both have a lightweight AluxX aluminium frame. The Roam XR costs £1,749 and the Talon is a bit more at £1,899.

When we tested Giant's Twist Express W e-bike last year we thought it was a lot of bike for not much money. Its range held it back, though for short commutes it’s fine.

The Talon and Roam are due to arrive in the UK sometime in the spring. In the meantime check out www.giant-bicycles.com for more info.