Haibike come to the UK

German-based Haibikes have been around for about eight years and having established a good reputation in Germany, are now hoping to follow in the footsteps of Canyon, Focus and Cube by selling their well designed and competitively priced bikes to UK customers.

They're an interesting company,. They're really into their carbon fibre development and design many of their own bikes at the top-end of the range of models. In typical German fashion attention to detail is paramount to their design philosophy, it's clear that they really look for the best solution to creating light and stiff road bikes, that much was clear from looking at their bikes at the launch this week.

It's not just good looking and well engineered road bikes, they also do some cutting edge mountain bikes (with automatically adjusting suspension) and, as you'll see further down, some interesting e-Bikes.

They'll be available in the UK through Raleigh (bought out by the Dutch Accell Group in a £62 million deal last year) who have signed up to exclusively distribute them. Here's a little taste of what to expect.

Meanwhile, Raleigh will be bringing in a choice selection of Haibikes’s carbon road bikes. As it’s the first year in the UK, they’ve decided against bringing in the full range and will see how the market responds to these models. 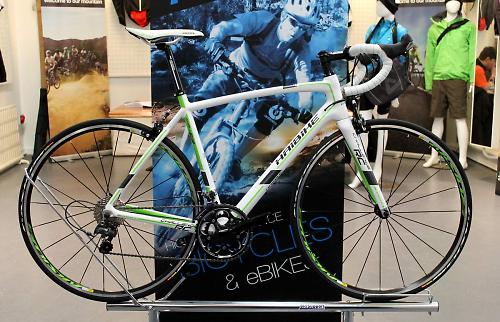 The range starts at £1,400 with the Challenge SL, with a Shimano 105 build. It wasn't available to photograph though, so here is the Challenge RC which costs £1650. It's a full carbon fibre frame with a tapered head tube, carbon fork and a Shimano Ultegra groupset. 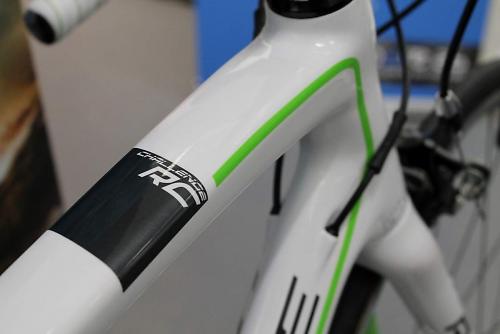 There’s a non-series Shimano R565 compact 50/34t chainset and a Tiagra 4600 12-30t cassette to give a nice wide spread of ratios. A nice touch are the colour matched decals on the Mavic rims. That’s buying power, that is. 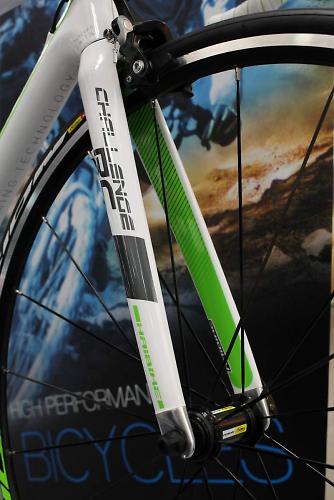 If you’re thinking the frame bears a resemblance to a Lapierre, you’d be right. Both companies are owned by the same Accell group, and this means they can share things like moulds. It makes sense, as it saves a considerable cost. Haibike do layup the carbon fibre to their own specification, however. Further up the range Haibike use their own moulds. The weight for this bike is 8.1kg. 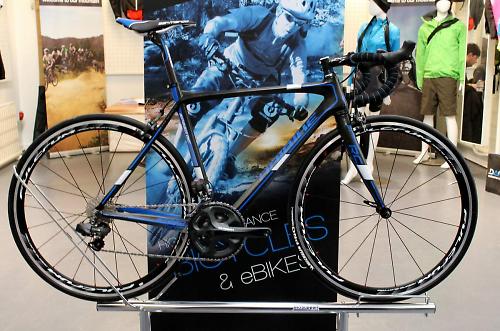 This is the Speed RC. Don’t get too comfortable with it, they won’t be bringing this bike into the UK. Instead they’ll be selling the nearly identical Affair SL instead (they hadn’t received stock of this bike in time for the show you see), which uses the same mould but a higher grade of carbon fibre. 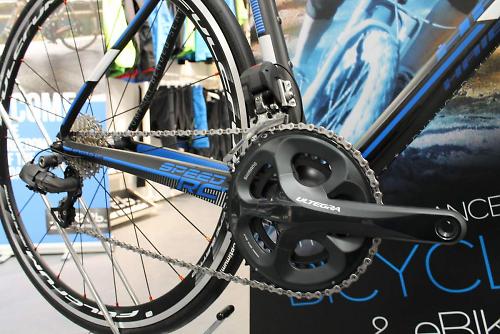 This is their own frame design and has some striking details. Foremost are the gargantuan chainstays, complete with a metal chain guard behind the chainset. There’s other thoroughly modern details we kind of expect to see on carbon bikes these days, a tapered head tube, skinny seat stays and a PressFit bottom bracket. The top and down tube have interesting profiles, with four gently curved concave faces. The frame has internal routing for the Di2 groupset, and there are no redundant cable port holes here. 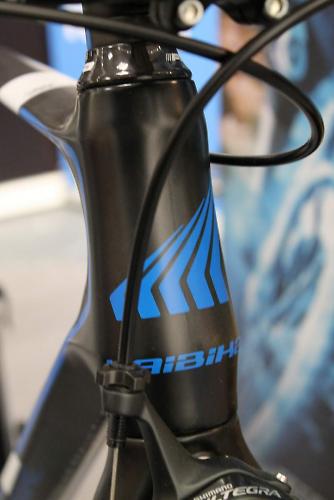 The Affair is available in two builds. The RC is very similar to this pictured bike with a full Shimano Ultegra Di2 groupset but with Reynolds Assault carbon clincher wheels and Michelin PRO4 tyres. XLC is their own componentry line and is found on the handlebar, stem, tape and seat post. Saddle is a Selle San Marco Contour. It costs £4,000 and weighs 6.7kg. 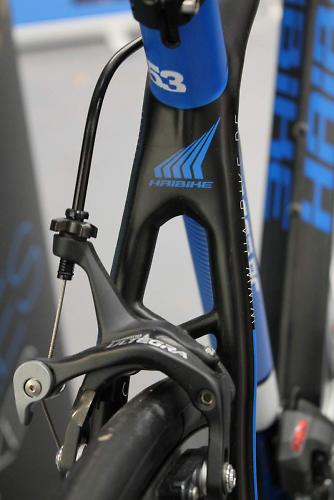 The Affair SL has a mechanical Ultegra groupset, Mavic Ksyrium Elite wheels and a 7kg weight. It costs £2,600. Onto the bikes. The top-of-the-line eQ Xduro RC 29in e-Bike was shown at Eurobike last year and this week we had the first chance to get up close and personal with one of the first to land in the UK. E-bikes represent an important opportunity for the future. With growing health concerns and rising transport costs, many are looking to e-bikes as a good way of getting many would be cyclists onto two wheels. They’re hugely popular over the Channel, where cycling is as much a form of transport as it is a competitive sport. They’re only set to get more popular over here, too. 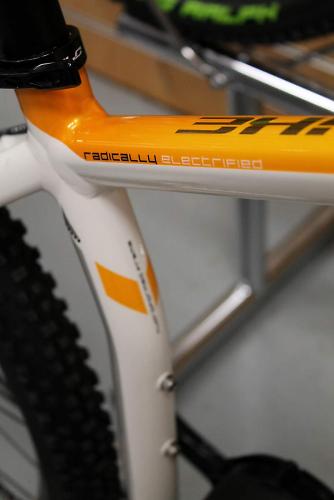 There are three models in the Xduro range, and they’re all based on mountain bike hardware. Pictured is the hardtail with 29in wheels, alongside two full suspension bikes listed in the catalogue. It may look like a mountain bike, but 29in wheels measure the same as 700c wheels, so in essence there is nothing to stop you putting some slick road tyres or cyclocross rubber on there. 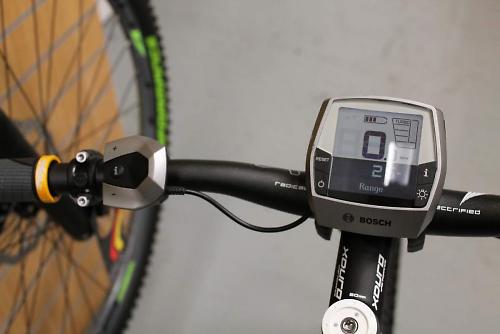 The bar-mounted LCD display is nice and clear and shows you basic stuff like how fast you’re going and, importantly, your available range. The smaller control next to the grip allows you to operate the head unit without removing your hands from the bars. The plus and minus buttons alter the degree of assist the Bosch unit provides. It’s clear Bosch are investing in this technology: it looks very smart, it’s well designed and functions intuitively. 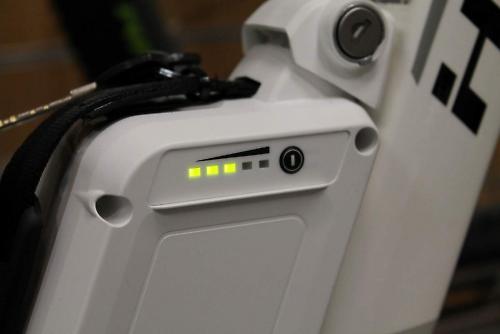 It’s designed to assist your pedalling, and there are two battery versions available, a 300 or 400 Wh (watt-hour) motor. The more powerful version gives a range of 140 miles on the eco mode, or 115 miles on turbo. Charge time is between 3 and 5 hours. The lesser powered version delivers 110 miles on eco and 80 miles on turbo.

It’s not light at 20kg. A quick heft of the bike revealed the weight to be, well, quite weighty. Let’s not forget you’ve got a 250 watt motor there to help propel that weight however. 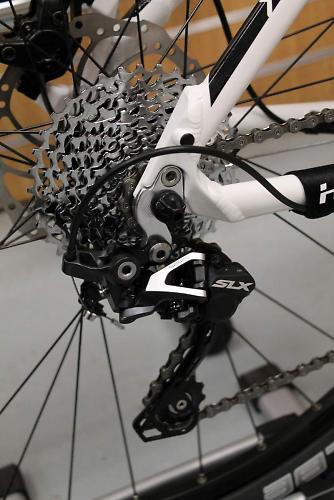 The bike is specced with a Shimano SLX groupset, with a single ring chainset and an 11-36t cassette out back. Magura MT2 hydraulic brakes are fitted with 180mm rotors to stop you promptly. The frame is made from 6061 aluminium tubes with hydroforming to create some of the dramatic tube shapes. The down tube’s belly to cater for the Bosch motor, for example, and the curved seat tube to provide clearance for the rear wheel, to keep the wheelbase relatively short.

A Fox 32 CTD fork provides 100mm of well damped suspension for taming the bumps through the front wheel. Shimano 525 hubs are laced to Rodi CC40 double wall rims. Schwalbe Racing Ralph 2.25in tyres are fitted, but again there’s nothing to stop you putting some road slicks on there. It costs £2,750.

Raleigh are currently in talks with dealers about stocking bikes, and they have announced a number of demo days to give potential customers a chance to try them out.

See www.haibike.de and www.raleigh.co.uk for more details. We'll be getting one in to test soon.