In case you didn't know, e-bikes are big news on the continent. Eurobike is always full of them, but we only ever see a very small percentage of them over here.

Why is that? Well, the e-bike market is built around cycling as a form of transport, and cycling for transport is bigger news across the channel than it is in the UK. Even with the success of the cycle to work scheme getting more people on bikes on a daily basis, the fact that most people are limited to a spend of £1,000 puts most electric bikes out of reach. Most good ones, anyway. There are plenty of good ones, too. In the mainstream market the bottom bracket motor has mostly taken over as the standard way of doing things, and specifically the Bosch bottom bracket motor, which was everywhere at Eurobike. Bosch have just released a new version of their system; it uses the same basic drivetrain as before but it's been updated and there's a new control unit. 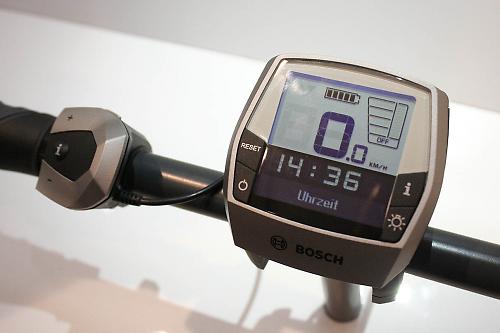 Called Intuvia, the bar-mounted control now consists of two parts. In the middle there's the main display which functions both as a bike computer and a display for the electrics. It'll tell you how fast you're going, how much battery you have left, what mode you're in, all the usual. Complementing that there's a remote switch, which is designed to be placed by the grip so that you can access it without taking your hands off the bars. It has plus and minus buttons to change the assist level, and an info button in the middle to switch between displays on the main head unit. It's all very neat and tidy. 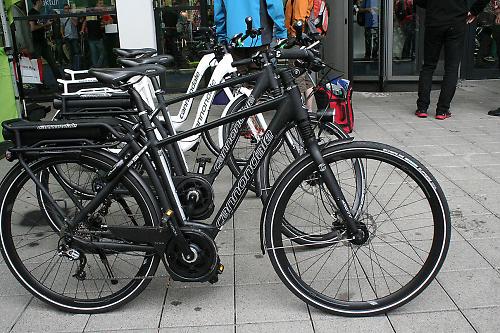 I've used the Bosch system before but had a go on one of Cannondale's excellent e-Series bikes to try out the new dashboard. It's very clear and easy to use, there's a backlight for when you're out after dark and the remote makes giving yourself an extra boost really easy. Okay it's no great hardship to press a button in a centre console but having the switch to hand means you're more in control, and that's a good thing. The Bosch, like nearly all the e-bikes at Eurobike, is a pedelec - pedal assist, rather than throttle powered. This is to comply with EU laws for electric bikes. There's still some throttle bikes but they tend to be more powerful off-road machines. More on EU laws in a bit. 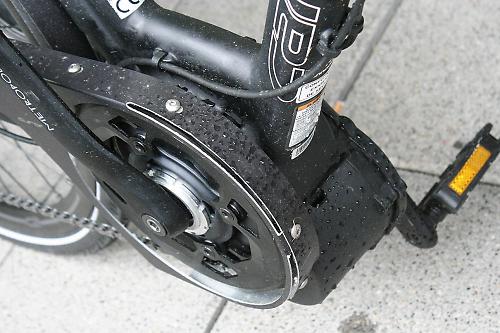 The Bosch system gives you four levels of assist. Eco is the lowest, with the motor adding 30% on top of any power you're supplying. After that it's Tour (100%), Sport (180%) and Turbo (250%) for a super-quick getaway at the lights or the steeper hills. Power delivery and control is pretty faultless, it's a very smooth system that's perfect for bike-as-transport kind of riding. Two batteries are available, a 300Wh and a 400Wh. The higher capacity one just uses better (and more expensive) cells, the casing is the same. 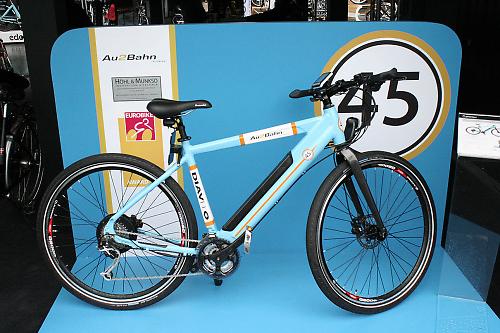 The e-Series bike I rode was limited to 25km/h like most e-bikes are, with a maximum output of 250W; again, that's what the EU law stipulates. Technically UK law limits the power of an e-bike to 200W although that slightly lower limit isn't actually enforced. However, one thing that has happened over the last two years is that more companies have made motors that comply with another set of guidelines, which allow electric assistance up to 45km/h and a motor rating of up to 500W, twice the usual power. The downside is that the bike needs to be registered. 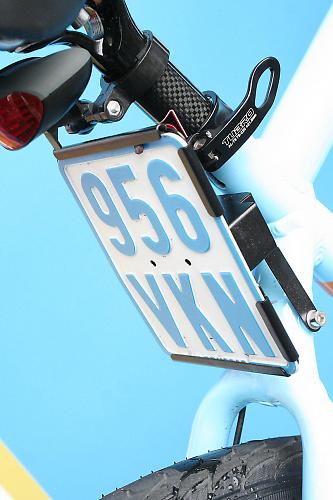 The exact requirements vary between EU states; in all cases they can theoretically be registered and insured as mopeds, since they comply with current moped legislation; so far as we're aware that's the situation in the UK although we've never actually attempted to register a high-power e-bike. In theory you should simply be able to pay your £55 vehicle registration fee and £16 VED and be able to secure some insurance, but whether the DVLA would have the right boxes to tick or insurance products actually exist is yet to be tested by us - anyone tried? In Germany and Switzerland there's separate laws governing the use of higher power bikes. German law, for example, requires the bikes to be registered and insured but you don't need a helmet and you're not allowed on segregated shared-use paths. 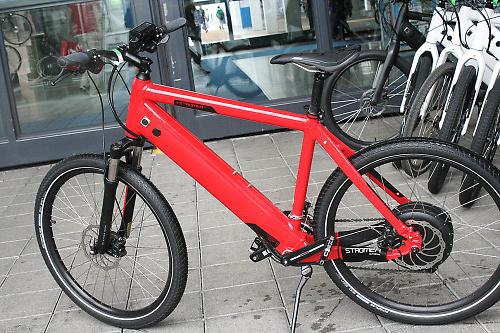 For the sake of completeness (and because it looked like fun) I also took out a 500W bike for a spin, this Stromer ST-1 from Switzerland. It's a hub motor bike, although Bosch and others do make a high power version of their bottom bracket motor. The Stromer's 500kWh battery is hidden inside the down tube; you can remove it to charge or use the built-in port if you're storing the bike in the garage. 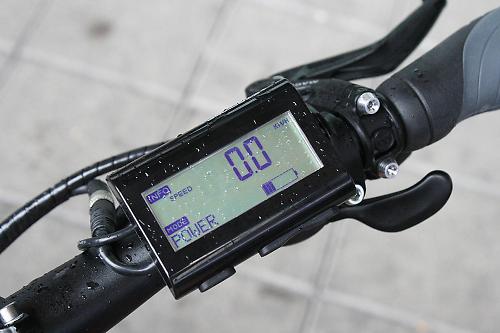 Certainly it's a fun bike to ride, with plenty of power on tap. 45km/h is pretty quick for a commute but the real benefit is in the extra power that's available for getting off the lights quickly and tackling the hills; it's no wonder they're popular in topographically-challenged Switzerland. Stromer's bar-mounted controller isn't quite the ergonomic marvel that the new Bosch is, but it's very usable. The Stromer has regenerative modes, too, to charge the battery when you're coasting down a hill. 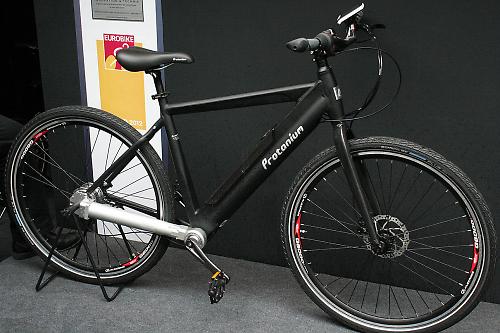 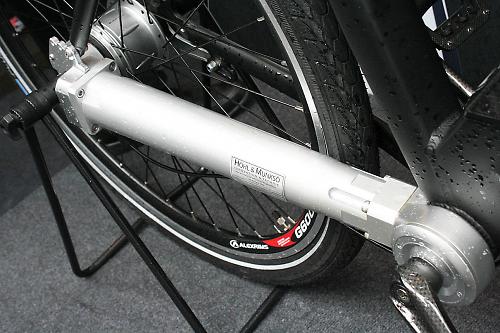 It wasn't just hub motors and bottom bracket motors either. This Protanium bike was getting a lot of attention, with a motor incorporated into a shaft drive. Shaft drives on bikes have been around almost as long as bikes themselves, but mostly as a curiosity; they're heavier than a chain drive and not as efficient. If you're making an e-bike though they suddenly make a lot of sense: efficiency and weight aren't such a big deal, and you have an enclosed drivetrain with a shaft that you can use as the rotor for the motor. That's essentially what Protanium have done here: the motor drive is built around the shaft making a very compact and fully enclosed solution. Good stuff. 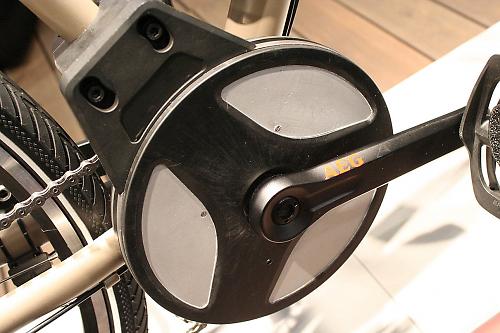 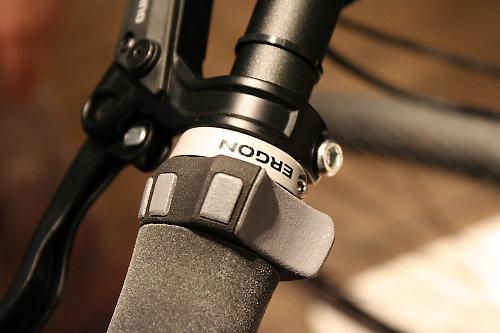 AEG had a new system on display too, although we didn't get to ride it as we couldn't find a working prototype. It's a chainset motor, the main benefit of which is that it can be retrofitted to pretty much any bike and gives similar benefits to a bottom bracket system: central weight placement and simpler measuring of pedal input for power assistance. They had a nice smartphone-esque display, too, and a mockup of a grip-mounted remote not unlike the Bosch one. 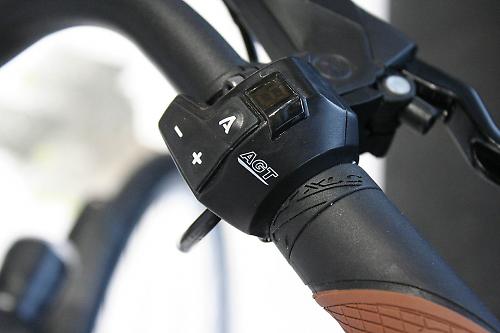 Automatic gears are gaining ground too. Last year we had a go on NuVinci's auto-shifting version of their CVT hub, and it worked pretty well. This year Winora had bikes with electric shifting and an automatic option, based on a Shimano Nexus 7-speed hub. The automatic system, made by JD Group, senses speed and cadence and changes gear accordingly. We would expect more and more manufacturers to pick up on this trend as it makes a lot of sense on an e-bike.

Design-wise there were a lot - a LOT - of sensible looking utility e-bikes, no great surprise when Eurobike is full of non-powered sensible-looking utility bikes too. Some of the models on display stood out though. Here are a few. 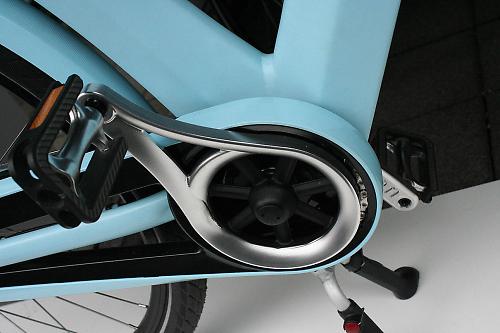 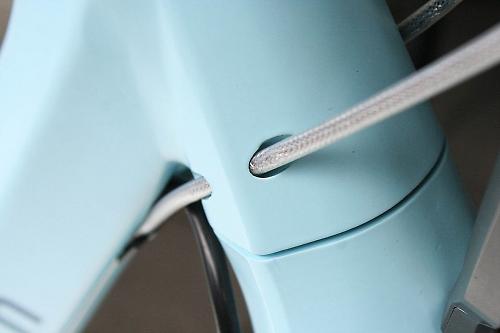 This step-through design from Eden caught our eye: loads of nice detailing including a very lovely crankset and neat cable routing through the head tube. Electrics-wise it's a front hub motor with a rack-mounted battery, the overall look of the bike is very stylish. 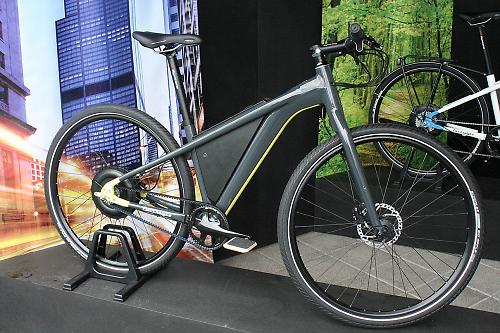 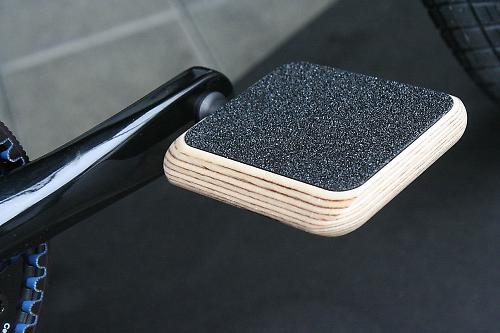 Electrolyte had this low-standover urban bike with a frame-mounted battery filling the main triangle. Internal cabling, disc brakes and a Gates Carbon belt drive are all on-trend, the BionX hub motor still has a decent market share although it's been overtaken a bit by the bottom bracket systems. If you're looking to make a good-looking e-bike, though, a hub's still the one to go for. 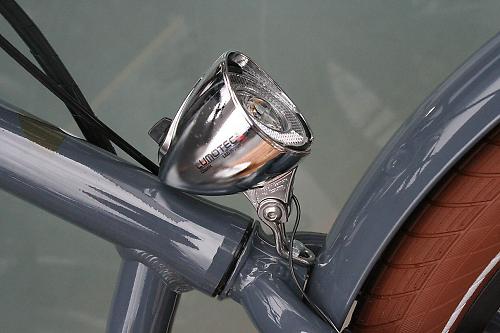 Ave's Town manages to look quite nice even with a bottom bracket motor, although it's a pity that they couldn't do something a bit more imaginative with the battery. 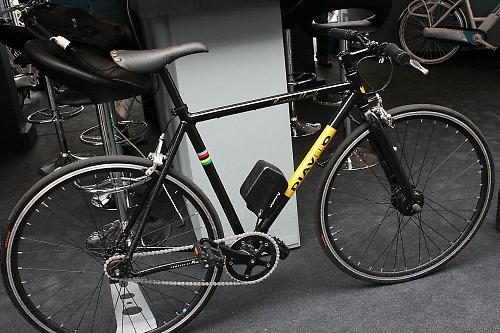 Protanium's most minimal drive system is a very small hub motor and reasonably small battery, which lends itself to more minimal urban bikes like this Diavelo singlespeed. Scooter-esque small wheelers were another emerging trend in e-bikes; Riese und Muller had their Kendu but we liked this Winora better, with its mag wheels and confident paintwork. good battery placement too. Merida were just one of hundreds of manufacturers showing off e-MTBs at the show. You can get anything from a basic hardtail to a full-on freeride rig. Again, it's a big thing over the channel. 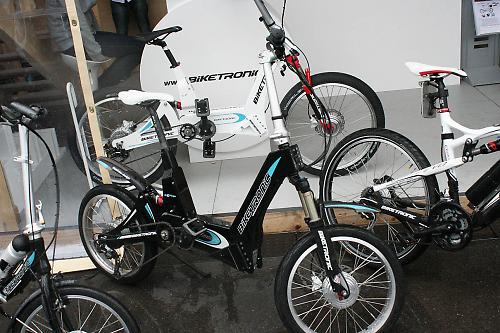 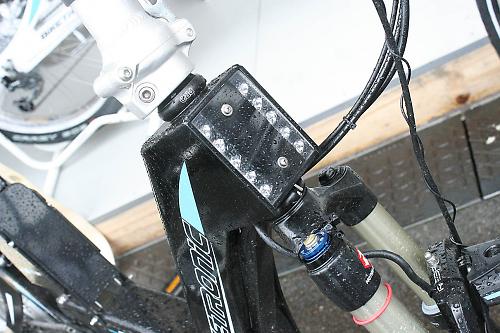 For every good-looking e-bike there were a dozen ordinary-looking ones though, and a half-dozen really-bad-looking ones. Case in point: Biketronic.