Sugoi Polartec NeoShell jacket claimed to be most breathable waterproof ever

Claimed to be most breathable waterproof cycling jacket on the market...
by David Arthur @davearthur

The brand new Sugoi Polartec NeoShell jacket, released today, is claimed to be the most breathable waterproof cycling jacket on the market. It uses Polartec’s Neoshell waterproof fabric, they reckon it’s 100% waterproof and yet more breathable than anything else in the cycling world right now.

Getting a jacket to be windproof and highly breathable, so that you don’t boil in the bag (as the old saying goes) is no easy feat. The entire industry is driving towards the holy grail of a jacket that can keep the elements out, and avoid you getting roasty hot. 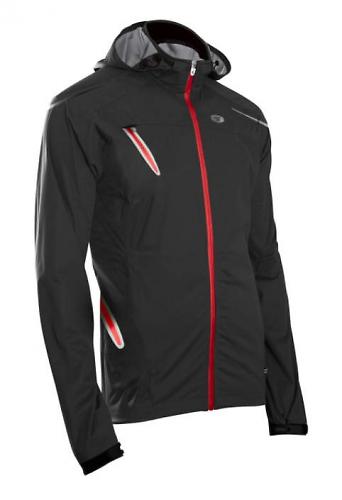 Canadian firm Sugoi reckon they’re one step closer. They’re using Polartec’s Neoshell fabric. It’s not new, it was first introduced a couple of years ago. We can’t recall it being used in a cycling jacket until now, however.

So this fabric comes with a pretty bold claim. That claim centres around it being 100% waterproof, 99% windproof and highly breathable. It has an air permeability of 2 l/m2/sec. This is a measure of how easily air passes through the fabric (air permeability is defined as the volume of air in millilitres which is passed in one second through 10Os mm2 of the fabric at a pressure difference of 10mm head of water). This small amount of air permeability is the result of a special hydrophobic, microporous, polyurethane membrane that lets enough air pass through to avoid overheating when you’re clambering up that 20% on the way to the office. It’s not enough airflow that you’re going to notice it and suffer from windchill, but is important in rapidly transporting vapor moisture away from the body. 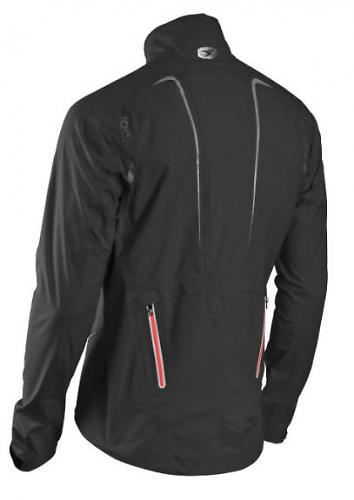 Both have easy access pockets, dropped tails, a slim fitted shape aimed at performance athletes and fully taped seams and waterproof zippers. The front full-length zip is offset to decrease discomfort at the neck. There’s loads of reflective detailing, something Sugoi have always been good at in my experience.

Sugoi’s technical designer, Rob Gill, is impressed with the performance of the new jacket. He says: “I have logged about 1000 kilometers in the jacket this winter, in some of the wettest weather imaginable, and it well exceeded my performance expectations.”