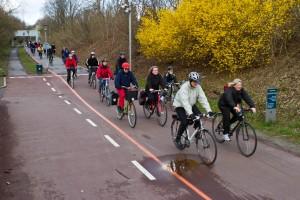 Take note Boris: this is what a cycle superhighway looks like

Copenhagen innovates to keep its cyclists safe
by Sarah Barth

Although most London cyclists welcomed the Cycle Superhighways with open arms, the reality has been less than perfect. Poorly designed junctions, delays at lights and forced interaction with pedestrians and traffic make a ride to work feel incredibly stressful still.

And yesterday we reported how Boris Johnson, Mayor of London, gave the misleading impression that the city’s Barclays Cycle Superhighways are “for indicative purposes,” suggesting that motorists are free to use them without breaking the law.

But there's no such confusion in Denmark. Copenhagen opened the first of 26 planned superhighways 11-mile path from Copenhagen to the suburb Alberslund that really put the cyclist first - from traffic lights to keep bikes moving, to providing footrests for tired riders to have a quick break.

Air pumps are available every 1.6 kilometres, and improved lighting has been installed along the route improved to make it safe to bike year round.

The traffic lights display a timer, so that approaching cyclists can adjust their speed to keep moving, rather than stop-starting and wasting energy.

The paths are also designed to be wide enough that everyone can cycle at a speed comfortable for their ability.

According to the Cycling Embassy of Denmark website, the cycle superhighways could increase the number of cyclists by 30 percent, adding 15,000 more cyclists to the superhighway network, saving 7000 tons of CO2 and 300 million Danish Krones in health costs per year.

Take a look, Boris - this is how it should be done.