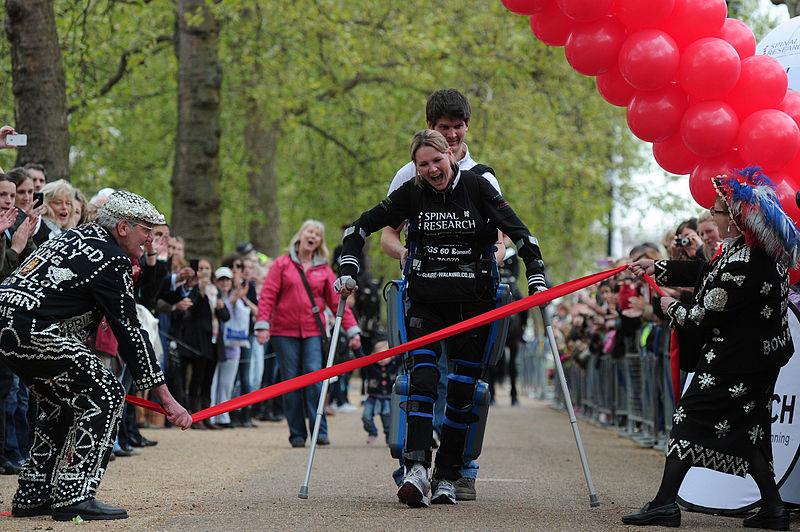 A paralysed woman who completed the London marathon can begin training for a 250 mile bike ride from Paris to London after a Scottish company provided a robotic bike for her.

Claire Lomas, who has no movement from the waist down following a horse riding accident, made it round the London marathon course in April in two and a half weeks, with the help of a pair of robotic legs.

She will attempt her first outdoor cycle ride later this month with a view to the Paris trip next spring.

She will use a Functional Electrical Stimulation Bike from a company called Anatomical Concepts for her training; a tricycle with pedals that she can strap into. Up to 16 electrodes are attached to the skin of her thighs and connected to an electrical stimulator.

The bike’s computer will send electronic signals to her legs, prompting her to turn the pedals. A hand-held device will allow Claire to control the speed at which her legs turn over.

When she gets tired, Claire plans to supplement her efforts with a hand bike.

“For the marathon I didn't have to be super fit as the pace was so slow in the robot. Mentally I had to concentrate on every step, but on the bike I will be able to switch off a bit more as it will be more physical.

"My legs will get tired and I might not be strong enough to go up hills.

"After my injury I found myself stuck indoors a lot as I didn't have anything I could do outside. That is really hard because I was such an outdoors person. What I'm really looking forward to is having something we can do together outside as a family.”

Derek Jones, founder of Anatomical Concepts, added: "Claire is taking on quite a challenge to cycle from London to Paris. While the bikes use electrical pulses to tap into the nervous system in the legs, it will still use her muscle power.

"We are going to work with her to customise the bike so she can use a hand-bike as well should her legs start to fatigue."