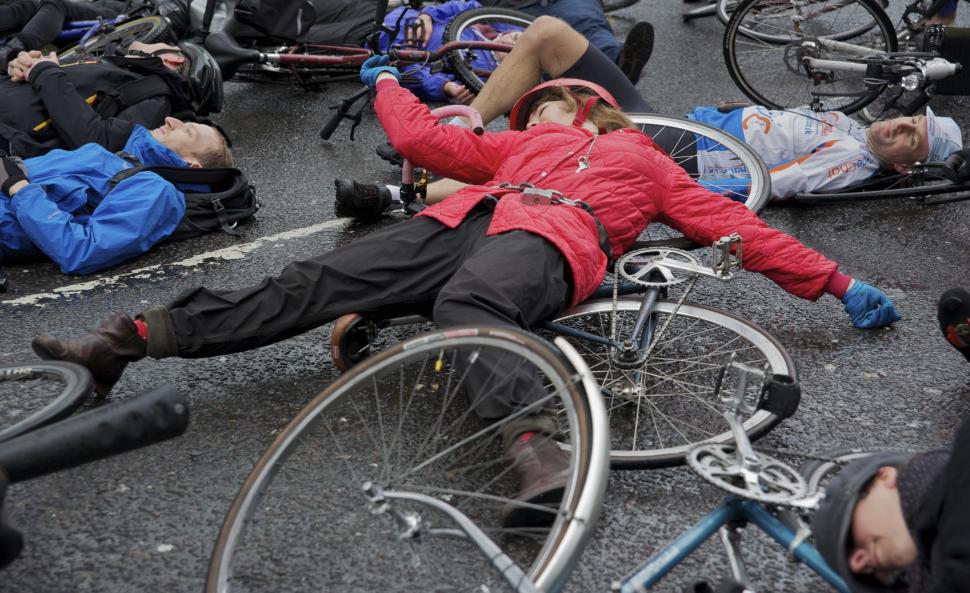 Wet pavements didn’t deter dozens of London cyclists from lying on the ground outside Addison Lee’s North London head office yesterday evening in a ‘Die-In’ organised in protest at comments about cyclists made by the minicab firm’s founder and chairman, John Griffin.

Last week, Mr Griffin's column in the company magazine Add Lib had sparked outrage in the cycling community and also attracted criticism from politicians as well as the mainstream press, including blogs in The Daily Telegraph and Daily Mail. In the backlash, a number of companies have cancelled their accounts with the business, while a website, Boycott Addison Lee, is urging others to follow suit.

In a busy week for Mr Griffin, he also got in to a legal row with Transport for London (TfL) after writing to all of Addison Lee's drivers telling them to start using London bus lanes and that the company would pay any fines incurred, a move which led TfL to seek a high court injunction against Mr Griffin's company.

Mr Griffin, who as well as his tussles with TfL previously took on the  former Labour Government over the M4 bus lane, is a man obviously used to fighting his corner, and seemingly unfazed by a large crowed of 'dead' cyclists on his doorstep emerged  from the offices to address the crowd.

One cyclist who attended said on her blog, Help! My Chain Came Off..., that Mr Griffin “read out his latest article,” adding, “I couldn't tell you what he said because he didn't shout it out loudly but I think its fair to say he is trying desperately to climb out of that humungous big hole he has got himself in.”

Another attendee, Mark Skrzypczyk, posted footage of the Die-In to YouTube.

The Die-In had been organised by Beth Anderson, who said afterwards on the event’s Facebook page: “For me, tonight was something truly special. A group of cyclists went to Addison Lee's headquarters with a message and they delivered it.

“Unfortunately it wasn't a huge surprise to hear John Griffin repeating the same old lines but his arguments are essentially ill-founded and based on the idea that the roads are, and can only be, dangerous. It was important to tell him that they are made even more dangerous by him.

“My deepest thanks to all of you that came, and all of you that supported this event and the many others that are happening at the moment. Things can, and will, change and that is down to you!”

Over the past week and a half, first in reaction to Mr Griffin’s instruction to his drivers to use bus lanes and then as news of his comments about cyclists emerged, many pointed out that Addison Lee cabs themselves presented one of the biggest dangers to cyclists on the capital’s roads.

Thanks to Benjamin Hughes for the lead photo