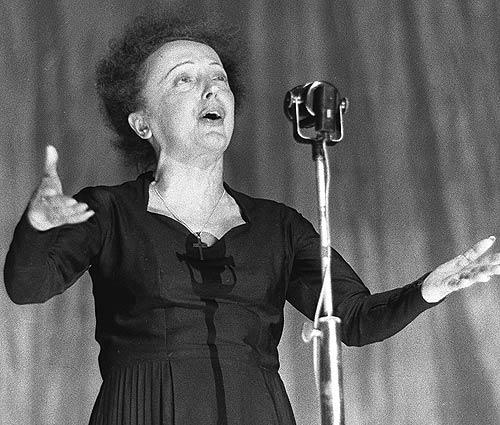 Chanteuse's letters of lust to Tour champ...
by Tom Henry

She famously regretted ‘rien’ and judging by her letters, French singer Edith Piaf certainly had no qualms about dating a married championship cyclist.

Piaf’s letters to Louis Gerardin, which fetched €55,000 at an auction in Paris last week, were full of explicit references to his well-toned thighs and buttocks, and in them she even vowed to stop drinking for him.

The letters, previously unseen, were written in 1951 and 1952. The collection also includes telegrams, a quick note and even a letter from Gerardin's wife, Bichette, to her husband, calling Piaf a "little monster."

"My darling, I want to tell you that no other man has taken me as much as you, and I truly believe I am making love for the first time," Piaf, who died of cancer at the age of 47 in 1963, wrote in one of the letters.

In others, she vows to give up her wild lifestyle for Gerardin, her "Mr. My Marvel", and turn into a "docile" woman.

"I made an oath in Church that if you came I would never touch another glass of alcohol in my life," she wrote in the series of letters, which end with her marriage to another man, the singer Jacques Pills.

In her letters to Gerardin, she mixes passionate love with sexual desire, praising the cyclist's thighs and buttocks.

"I would like to see you naked on the bed and I would lie down between your beautiful thighs...and well-entwined by the limbs that are normally only used for walking and sitting down," Piaf writes in one of the letters.

"I would like to stay there for a long time without moving and let my dreams come true."

Gerardin himself reportedly said of his mistress: "Forty eight hours with Piaf are more tiring than a lap in the Tour de France".

Given today’s story about cyclists’ apparent lack of fertility, it would appear that the baggier cycling shorts of yesteryear were far more conducive to afternoon assignations with French singers...