It's just a place in the queue for the power measuring system from Brim Brothers in Dublin but they're not asking for money yet.
by nick_rearden

The Zone power measuring system from Brim Bothers in Dublin we posted about back in July that measures your power output via special cleats has gone live today with a pre-ordering queue on their website here.

Unlike the forthcoming pedal-based Vector ANT+ based system from Garmin which works with special versions of Look Keo pedals*, and the somewhat similar-looking but non-ANT+ proprietary system from HRM specialists Polar, also in collaboration with Look, the Zone system works with an adapted version of the Speedplay pedals. Or more accurately an adapted version of the Speedplay cleats which are more or less pedal-sized. The power measurement takes place there instead of in the pedal axles, which is where the Look-based systems have their gauges.

Like the Garmin Vector, Zone is based on the ANT+ wireless data protocol which means it will work with any other ANT+ device capable of displaying power output from its software, such as a Garmin 800 or the forthcoming Bryton Rider 60 we posted about yesterday. 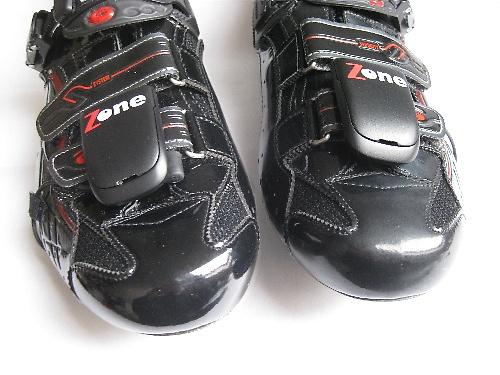 Unlike the Garmin and Polar systems, both of which are imminent and have a transmitting module in between the pedal axle and the crank, the Zone system has its pair of transmitters mounted on top of the cycling shoes with a little cable running around the side of the shoe and connecting to the cleat sensor. According to the Brim Brothers website, there is no firm date for delivery except an intention for 2012 and certainly no indication on pricing.

One advantage of Zone we can see is that moving from bike-to-bike would be a doddle, as the sensors go with you and your shoes, unlike the Garmin and Polar dual-sided systems where you would need to change pedals. For the folks using SRM and other crank and bottom bracket based sensors, the strain gauges are fixed to the bike so without changing cranks you're locked into one particular bike for power measuring. At least the CycleOps Power Tap rear wheel based system has the advantage of being easily transferrable, bike to bike.

There's also the little matter of pedal preference with existing Speedplay owners likely to be drawn towards Zone if they are already happy with their shoe and pedal set up and reluctant to mess with something quite so personal. Interestingly, one of the questions asked on the Brim Brothers website pre-order sign-up is "Do you use Speedplay pedals and cleats?" with the drop-down answers, "Yes", "No, but I'm changing to Speedplay" and "No". It will be interesting to see what they say to the people answering, "No."

The purpose of the pre-ordering process, according to Brim Brothers, is to get a place in the queue for when they become available, whenever that is, but they're not making any promises about 2012. They are, however, stressing that you don't pay anything now, you can cancel your pre-order at any time and you're not compelled to take up the offer when Brim Brothers confirm the price and delivery date.

* Update: reader westpenncyclist tells us that Exustar are now the pedal collaborator with Garmin, which explains why they've been a bit quiet on Vector since Eurobike. We're seeking official clarification.