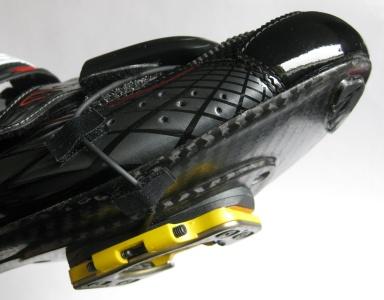 Zone system puts the world of power measurement at your feet

You might have thought that with cranks, hubs, chains and, more recently, pedals all being tapped for power information that the bike innovators had run out of places to stick a strain gauge. But you'd be wrong: enter the Zone from Dublin-based Brim Brothers, which is a cleat-based power measurement system.

Scheduled to launch 'sometime in 2012' the Zone system uses a sensor array in the cleat arrangement under your shoe, which is wired to a transmitter pod that fits onto one of your shoe straps. There's one for each shoe, which opens up possibilities – just like with pedal systems – for individually monitoring your legs and the balance of power. Like pedal-based power meters it's also easy to switch between bikes; even easier in fact because there's nothing attached to the bike at all, not even a magnet. Assuming you have the same pedals on all of the bikes in your stable, you should be able to hop from one to the other. The system has a claimed weight of 18g per shoe and uses the ANT+ protocol to talk to bar-mounted computers; Brim Brothers aren't going down the computer route but looking to integrate with the popular systems already on the market.

The system is shown in the release pics as using a Speedplay cleat but sticking to that platform would severely limit the Zone's appeal, so we're assuming that it will work with standard three-bolt cleats when it's released. The makers claim that the sensors don't add any height to the cleat stack so there's no need to adjust your position on the bike.

Sounds good? Yeah, we think so too. The system isn't without its technical issues though, and we'll be interested to see how they're addressed.

The first problem is calibration. Whereas with a Powertap hub or SRM crank the nanufacturer can control the production and fitting of the sensor, that ain't so with a cleat. Plus, different shoes have different material properties, so forces transferred to the sensor may vary. Brim Borthers say that "calibration is really simple compared to existing power meters", so we'll look forward to seeing the process.

Secondly, the calculation of power is more complex than measuring strain at the crank, or the hub, or the chain. This is a problem also faced by pedal systems, because the pedal is free to rotate about its axis. However, while it's simple to implement a system whereby a pedal system can know its axle position, this isn't the case with a cleat-based meter. We're guessing that the Zone will use acellerometers to measure rotational movement and strain gauges for force, but it'll be a complex calculation to resolve all that into useful power data.

That's not to say the system can't work though. We'll be following the progress of the Zone system towards production (along with all the pedal-based systems currently in development), and if we can get a go on a prototype then we'll certainly jump at the chance...

For more information head over to http://www.brimbrothers.com/2011/06/announcing-zone/