Garmin's booth was awash with punters at Eurobike, most of them drawn by the lure of the Vector power measuring pedal. Garmin haven't been much involved with the actual power measurement side before, even though their ANT+ devices allow other systems to be hooked up, but their acquisition of Metrigear last year signalled their intentions and the Vector is the fruit of that collaboration.

Seen power measuring pedals before? Of course you have, at last year's Eurobike. Polar had theirs on display, a collaboration with Look, and O-Synce had a prototype working on their stand too. Garmin's Vector joins a gathering throng, and power measuring pedals have significant advantages over measurement at other points in the transmission. Chief amongst them is that the pedals are easily transferred to another bike, meaning that you can switch your power pedals to your TT bike or winter trainer (or even your 'cross bike or MTB, if you're brave and don't mind climbing muddy banks in your road shoes) and continue to log your progress with minimum fuss.

The system is easy to fit too; it's a home job rather than something that needs to be done in a bike shop, and the pedals are supplied ready calibrated. Power is calculated by comparing the deflection in the pedal spindle to a known deflection under load, and calculating a force from that. In conjunction with the cadence, measured with accelerometers in each pedal, you get a power reading which is beamed to your Garmin of choice (Edge 800, 500, 705 and Forerunner 301XT) via the ANT+ protocol. You get an overall power reading, plus a percentage split from each leg so you can see where your power is coming from. If you have an Edge 800 or 500 it can also display TrainingPeaks™ metrics for Normalized Power (NP™), Intensity Factor (IF™) and Training Stress Score (TSS™). We don't really know what those are, but it sounds impressive. 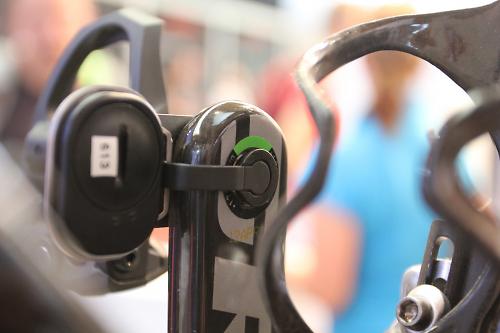 The transmitter plugs into the pedal spindle and sits behind the crank in a similar position to the Polar system. O-Synce's transmitter is built into the pedal base. The Vector pedal is Look Kéo compatible, just like Polar's, so if that's your platform of choice you can take your pick. Neither is going to be particularly kind on your wallet, though. To get your mitts on a pair of Vector pedals you're going to have to hand over £1,149, which is in the same ball park as other power measuring devices.

Also on the stand, but on a kind of need-to-know basis (ie it wasn't actually on display) was the new Garmin Edge 200. It's the baby brother of the Edge 500 and exactly the same size, but it doesn't have any ANT+ capability. That means you can leave your HRM and Vector pedals at home and just go out for a nice ride, and when you get back you can share your ride with your mates on Garmin's excellent Connect website.

While it's on the bike the 200 will also function as a fully featured (and customisable) bike computer, and you can upload routes to the unit and follow them as a dotted line, like you can on the 500; obviously the 200 doesn't support proper mapping. On top of the standard computer functionality there's also a range of GPS/memory related functions such as virtual partners where you can also race yourself over a set course, and the 200 will display how far ahead or behind you are. 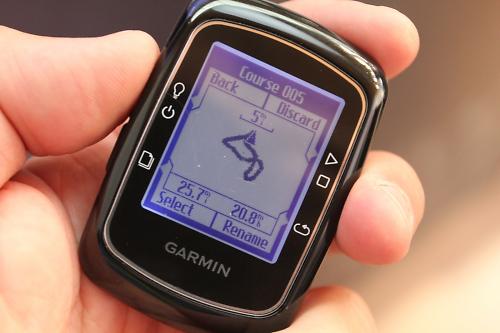 And the price for all this? Just £129, which isn't much more than you'd pay for a top-end non-GPS computer. Sounds like a good deal to us, and we reckon it'll appeal to a wide range of riders, from commuters logging their miles to more serious cyclists who want to keep a detailed log of their training but aren't into HRM or power data. It also has the advantage that all GPS computers have: there's no sensor to fit and it's a simple job to switch it between bikes. The Edge 200 can store 130 hours of ride data, and it'll run for a claimed 14 hours before recharging. Given our experiences with the Edge 500 and 800, we'd be inclined to believe those claims, just about. You'll be able to get one soon.