Lots of shiny toys at Birmingham's NEC this weekend
by nick_rearden

One day, three big halls at Birmingham's National Exhibition Centre for Cycle Show 2011. It's a lot of walking, talking and snapping and the good thing is you can do it for yourself this weekend.

Bianchi's second level of carbon frame below the sub-1,000-gram Oltre is the Sempre which is geometrically identical in offering a full-on road-racers position but employing less expensive carbon in the construction. The benefit for customers who have to buy their own bikes is a lower price while only sacrificing 100 - 200 grams, weight that could more usefully saved in lighter wheels and tyres, anyway. The ideal application, then, for Shimano's new Ultegra version of Di2 electronic shifting, again only giving up 200 - 300 grams over its posh Dura-Ace cousin. The complete Bianchi Sempre Di2 package will sell for £3,500 when it first arrives before Christmas. Peugeot has one of its long-standing framebuilders in France making small batches of special frames with old-school chrome, paint and graphics and lots of lovely detail in the lugwork. There's a fixie, a women's Mixte-framed bike that we snapped at Eurobike without realising the back story and this classic geared road bike. Price for each is £2,000 and there's likely to be a long wait, according to Peugeot's spokesman. 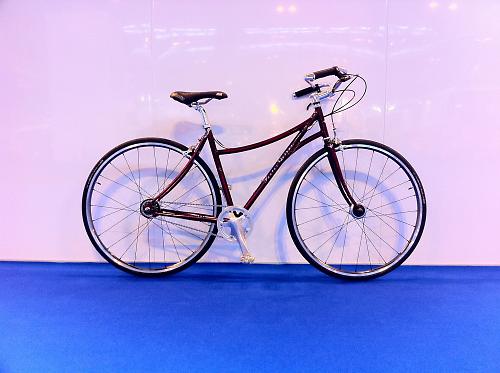 We first met bike builders Paulus Quiros at Bespoked, Bristol earlier in the year but Mr Paulus and Mr Quiros don't appear to be limiting their ambition to the world of exotic custom frame makers; the stand is not as large as Condor's but it appears to have squeezed into it lots of exquisite little details. Plenty of them were on display in a new dropped-top-tube frame showing off the swooping lines that are shaping up to be a PQ trademark. £1,200 for the frame and forks. 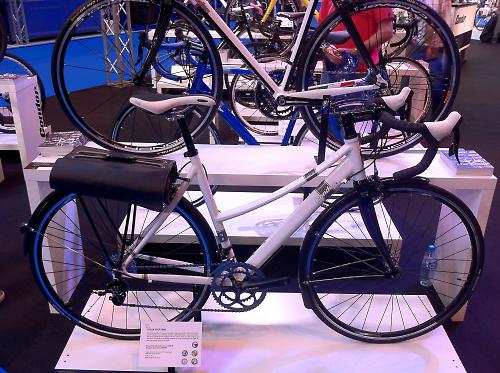 A number of Condor's customers had expressed an interest in a women's frame but according to designer Ben Spurrier he had been nervous, putting the prototype in the main shop window to gauge reaction. "When the first customer walked in within a few hours saying 'I want one of those' I felt a lot better." The same large flattened aluminium top tube that swoops elegantly on the unisex Italia model is used but reversed such that riders can step through the frame more conveniently in a city skirt; quite an issue on the Grays Inn Road. Price is £499.99 or there's a fast city commuter built-up bike complete for £999.99. Also check out here the story of Condor's new Super Acciaio top end steel race frame. With Christmas coming, what cyclist wouldn't want a World Champion's short-sleeved wool blend jersey, made by Santini to celebrate Gianni Bugno winning the road World's in the two consecutive years of 1991 and 1992? The jersey is nicely packaged for easy wrapping in a metal canister for £125. 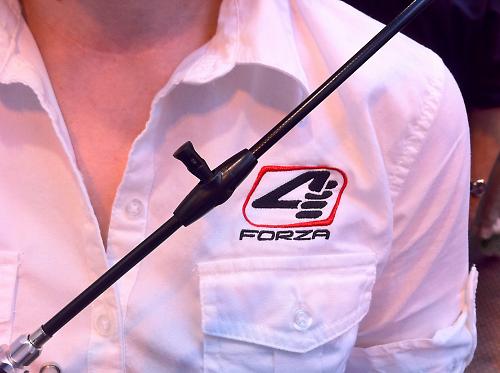 We'll be featuring the 4ZA components offshoot of the Belgian Ridley brand in a separate story because there are some nice saddles, handlebars and bits at three price levels to suit most road and mountain bike customers. Meanwhile, we cannot resist mentioning this clever little £20 device that installs inline on your road brake cables to provide the reverse function of what a quick release normally does to allow quick release of a wheel. In this case, wider carbon rims along the lines of Zipp's recent 'Firecrest' pattern mean that should you need to slot in a standard narrower wheel from neutral service, depressing the bottom moves the brake blocks 2mm inwards. Simples! Lake's oven-baked-to-fit top-end CX401 shoes aren't new but the ability to order a custom design from top to bottom is and they only take a few weeks to arrive. This Union Jack design is for GB star Wendy Houvenaghel but customers willing to spend £400 instead of the standard £339.99 can have any combination of sole, upper components and Boa closure colours. The fact you can already order the neutral standard colours in half sizes and two widths with carbon soles specifically for Speedplay, Time or 3-hole fitting will be enough for most but it's nice to know you could order an all-Gold pair, eh Wendy?

There's also the less expensive new CX331 model, still with a heat-fit insole but with kangaroo leather uppers mounted on the same carbon sole and with the comprehensive sizing options of the CX401 model. Incidentally, the Boa closure system now uses a 42-strand carbon cable for extra strength and durability. Price £249.99. 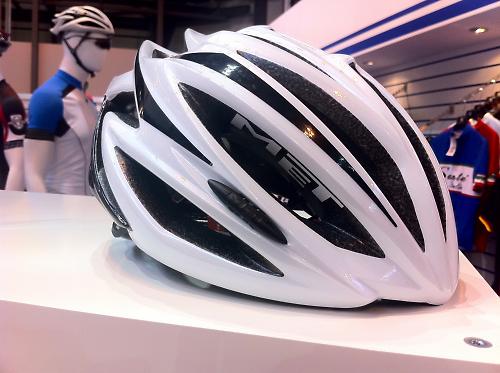 The popular Estro helmet from MET has been on a slimming diet for the 2012 version, paring away material from the frontal area to allow better forward vision in a tucked position but without compromising the essential safety purpose of wearing a helmet in the first place. The rear shaping around the ventilation ports now appears even more extreme in its pointiness and there's a micro-adjusting wheel at the rear of the retention band in the latest modern style. Mainly, though, it still appears to be a robust and purposeful helmet at a good price of £89.99 compared to rivals well over £100. 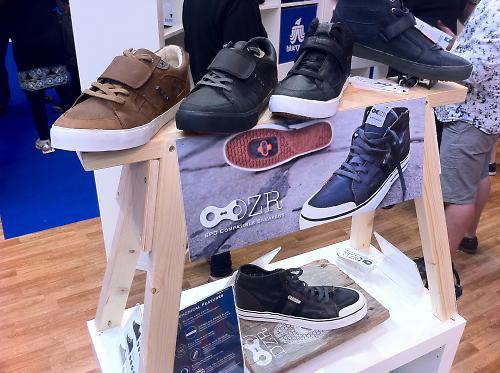 We reviewed the DZR Strasse cycling shoes that look like basketball boots back in June and about the worst thing we could say about them was that we weren't sure who would like the styling. Now there are a dozen style options to choose from ranging in price from £89.99 to £109.99. Even more surprising than sneakers that hide their clip-in cycling credentials is a pair of men's city-slicker shoes in black or brown leather and even suede. Taiwanese shoe maker Quoc Pham has impressed us before with his lovely hand-made leather cycling shoes in a traditional style and we even have a pair of the newer ones with recessed cleats on test. The very latest Derby model at £300 is towards the top of what a city banker might expect to pay for a pair of work shoes but hides their cycling cleats within a crepe sole for efficient pedalling. Still comfortable to walk in but stiff where it matters in the midsole for cycling, according to the designer.

Not surprisingly for Britain's biggest Rohloff dealership that also makes touring bikes, St John's St Cycles have one of their Thorn bikes with a dropped handlebar on display fitted with the Gilles Berthoud barrel shifter we spotted at Eurobike. There hasn't been much chance to try it yet, according to SJS's Robin Thorn but we couldn't help thinking they must be quite pleased with it if they're showing it in Birmingham.

Lots of news coming from Carradice 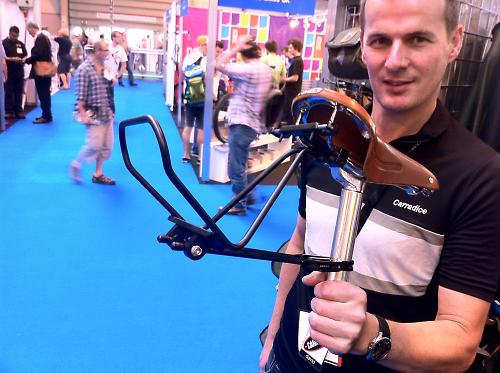 We're working on a separate story on Carradice, there's so much good new stuff in bags and the means to attach them to your bicycle. One big new thing we're mentioning now is a neat quick realise for all the saddlebags that allows instant and positive attachment using their stainless steel saddle support or this new £40 alloy version their David Chadwick is showing off here. 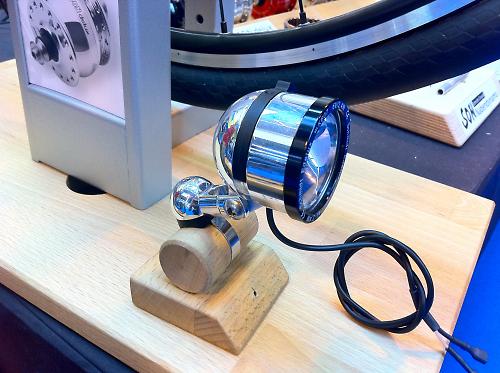 We never get bored saying 'Schmidt Machinenbau' makers of the Son front dynamo hubs and lights. They have a new 140 gram lighter version of their '28' hub bringing the all-up weight down to 440g and there's a lighter-still Delux version with 'weaker' magnets, according to their Britta Zimmermann, which produces less drag as long as you're happy running less than the most searing outputs. We loved the £20 bracket to attach the Schmidt front light to all handlebar diameters.

1
“People need to see justice being done”: CyclingMikey says camera cyclists suffer online abuse because some motorists “feel they have the right to drive how they want”
2
Judge tells man who "played the system" after dangerous driving killed two young boys to expect "very significant sentence"
3
Near Miss of the Day 847: Careless caravan close call causes cyclists concern
4
Mavic launches the Cosmic Ultimate as “lightest wheelset in its category”
5
Large vehicle may have crashed into controversial bike hangar, council says
6
Councillor calls for anti-bike barriers to prevent “dangerous” cyclists “zooming across” foot tunnel
7
Town council says “restrictive” RideLondon sportive not wanted – because locals “can’t get out of their own road”
8
167 cyclists – and just four drivers – fined in police crackdown during Tour Down Under