Condor have launched a new steel race bike the Super Acciaio and we got a first good look at it yesterday during build up at the Cycle Show.

The TIG welded frame is made in Italy from a triple butted tubeset that's the result of a collaboration between Dedacciai and Condor, that draws on Condors more than 60 year history of building steel bikes. But this is not exercise in retro-chic: the Acciaio (the Italian for steel) is an out and out modern race bike, it shares the same geometry and fork as the Super Leggero, Condor's top end carbon race weapon and the bike used by the Rapha Condor Sharp racing team. 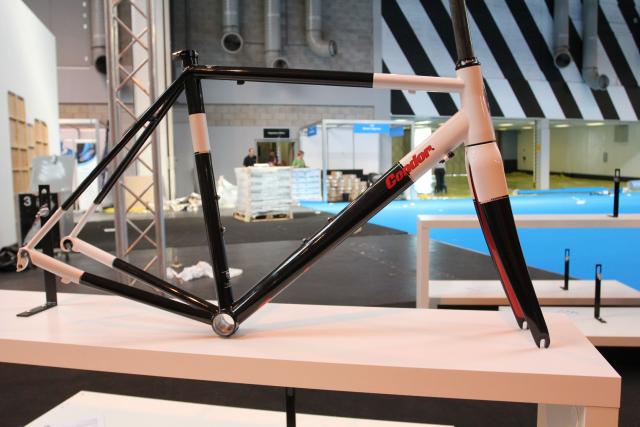 Condor's Ben Spurrier, who designed the Super Acciaio explained that the brief was to build a modern race bike from steel, so this is an exercise in stiffness, delivering power to the back wheel quickly and sharp, accurate handling. So you get a an asymmetric headtube up front tapering out to an inch and a half at the bottom and a press fit BB30 bottom bracket down below as a further enhancement to stiffness. The top tube is custom rolled and flattened to Condor's design while the oversize downtube bi-ovalises between it's junction with head and downtubes… you get the idea, there is nothing retro about the Super Acciao. That downtube againg is there to keep things stiff as does that flattened top tube, but the top tube at least is also making a statement about looking modern too. 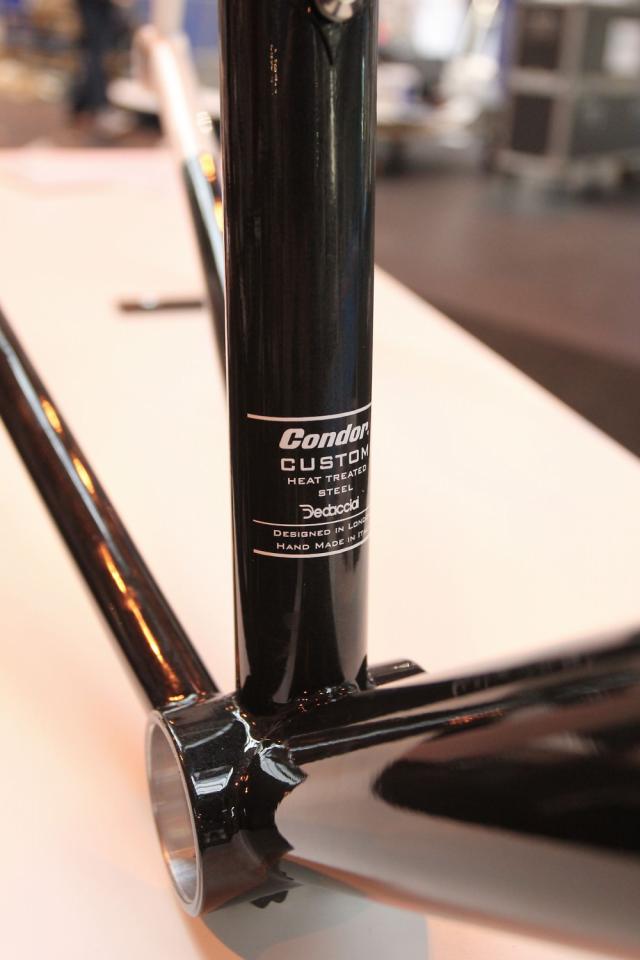 Two years in development the Super Acciaio is hand TIG welded in Italy and is in many ways says Ben is a more aggressive version of the existing Condor Acciaio frameset a bike that majors on performance and comfort, but which is much more in the sportive mould. Dan Craven rode 'Steely' the Super Acciaio prototype as a crit and training bike during the 2010 UK season and then took the bike back to Namibia with him for close season training and competition - he rode it to victory in the King of the Mountains competition in the Tropicale Amissa Bongo race in Gabon, so the new bike already has a winning pedigree.

The frame and forks will set you back £1,199.99 with complete builds starting at £1,759.99. Ben told us that depending on the finishing kit used, builds under 17lb are easily achievable.

You can see the new Super Acciaio in the flesh at the Cycle Show and there's a special ticket offer price for road.cc users of just £11.50 per ticket - that's £4 off the standard ticket price. You can buy tickets by going to www.cycleshow.co.uk/book or calling 0844 848 0132 and entering the discount code ‘RCC’. The offer price does not include a £1 booking fee.