Gilles Berthoud, known for leather saddles made in France and regarded as 'better than Brooks' in some circles, has surprised a few including us by making a long-awaited machined aluminium shifter called GB Twister to fit dropped handlebars for the Rohloff 14-speed internal geared rear hub.

The German hub maker has not offered a 'dropped' option due to touring bikes in its home market - the usual application for Rohloff hubs - almost always having straight or swept back but never dropped 'bars in British or, indeed, French style.

The problem lies in making a barrel shifter - remember Gripshift? - that slips around the bend of the handlebar enabling mounting where it seems intuitive on the inside top although plenty of British commuters and tourists have followed Rohloff guidance and fitted the adapted shifter designed for flatties on the end of the 'drops' in the same position as a traditional 'bar-end lever. 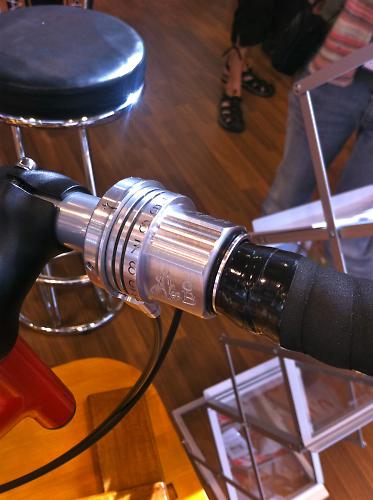 Monsieur Berthoud himself showed us how he's designed the aluminium unit in three interlocking parts with the innermost barrel relieved to allow a neat twist around the bends. Standard fitting is 24mm diameter to fit road 'bars although the Twister can be ordered in 22mm as well in case you prefer it to Rohloff's own unit on your mountain-bike-style bars.

The price of €125 should equate to just over £100 which seems reasonable related to the £1,000 cost of a Rohloff hub although for now there is no UK distributor meaning that you'll need to practice your school French the next time you're in the right sort of bike shop en France. We reckon, "Pardon, avez vous le Jeels Bertoo GB Twister?" should just about cover it. 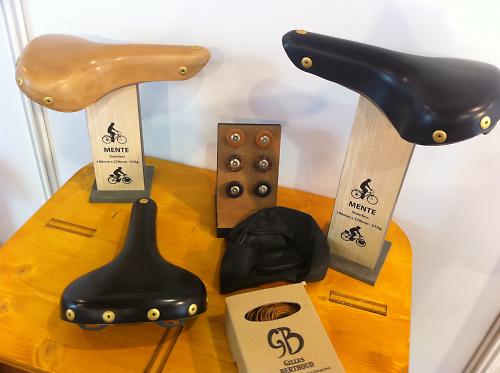 There's a new saddle as well, partly designed to address the issue of Berthoud saddles coming in at what can only be called 'premium' pricing at the thick end of £200. The new Mente - say 'mont' franglais fans - is not only less expensive for €119 but a little wider at 180mm to suit tourists and commuters who are likely to be seated in a more upright position and therefore requiring more support as well as many women whose wider pelvic bones will appreciate the less excruciating platform. The only loss as far as we can see is that the extremely thick leather - natural or black - is attached to a high-tech ABS frame with rivets instead of removable screws. Berthoud makes a big thing about the rivets being arranged away from anywhere your bottom is going to be in contact. 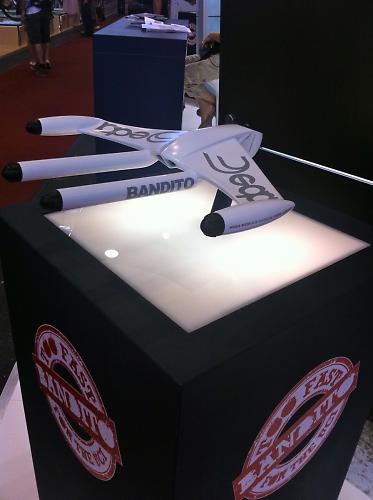 Italian handlebar brand Deda has decided to deal headlong with regulations controlling the aspect ratio of aerodynamic features on bicycle parts for top-level racing. Clearly flouting the 3:1 limit with the 'wing' of its new slippery-looking one-piece carbon aerobar, Deda is using a provocative 'Too Fast For the UCI' slogan to promote the new Bandito bar which is clearly never going to trouble the great majority of scrutineers at triathlons and time-trials where Union Cyclisme Internationale regulations hold no sway. No final price yet although Deda were saying €720 at Eurobike. Comes in black or white when shipments start later in the Autumn and in time for the prime winter fantasising-about-your-next-race-bike season. 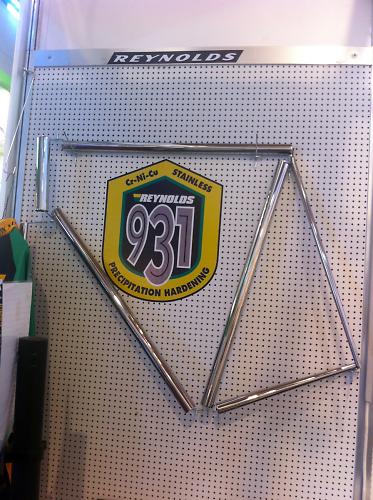 Birmingham's Reynolds Tubing is launching a new stainless steel alloy tubeset called 931 in normal Reynolds three-digit nomenclature to signify, in this case, the ratio of chrome, nickel and copper in the steel blend. The idea is to match the strength and therefore weight when drawn into tubes of the popular 853 material but with the superior non-corrosive qualities of stainless steel. The new tubes will be 10% less expensive than premium 953 stainless material and 20% more than 853. Reynolds man Paul Murphy says he "hopes the new option helps framebuilders bridge the gap between the two successful products" before intimating that he hoped some series-producers will be tempted as well. Pashley already is; the new Sprinter launched at Eurobike will feature a polished frame in the new material.

Reynolds is also rolling out to its customers who are typically custom framebuilders without access to sophisticated computer modelling tools a programme called eReynolds FEA (Finite Element Analysis) which will enable them to 'build' their frames in virtual form to test the feasibility of tubing and joining options before expensively committing to physical prototypes. Developed in conjunction with Birmingham University, Murphy says "it's a way of helping builders offer competitive frames especially now that cyclists are developing a whole new appreciation of the upsides of Reynolds metals." 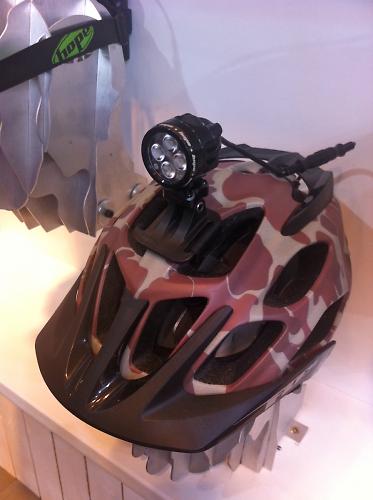 You don't have to mount it on your helmet but it shows how weightless the new Vision R4 light seems.

Hope had already had most of its lights samples nicked by the time we got there but boss Alan Weatherill was resigned that at least they'd made an impression while they had them. Using the latest Cree XPD LEDs and their own optics, Hope has achieved a remarkable 65% increase in output to almost 1,000 lumens, well 960, while dropping weight on the new Vision R4 such that mounting on a helmet is an easy option. Same usual 'hewn from a solid block of alloy' Hope look but considerably smaller, they say 30%, which makes it viable on its own head harness for caving, running, walking the dog; whatever. 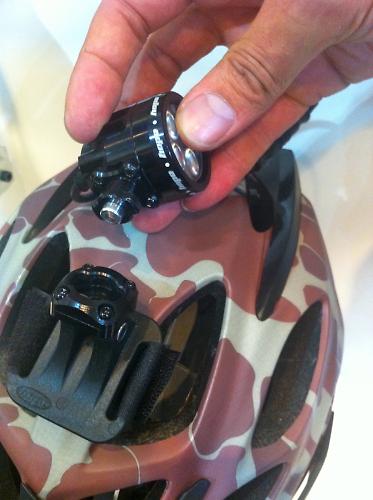 The light is supported by the same twist-in bracket recently launched and admired on the rear LED light. There will also be a crazy 2,000 lumen Vision R8 which is likely to become de rigueur for night time mountain bikers although they'd better start saving now. Prices are unlikely to increase much, says Hope, but that's still not much less than £300 for the current Vision 4. 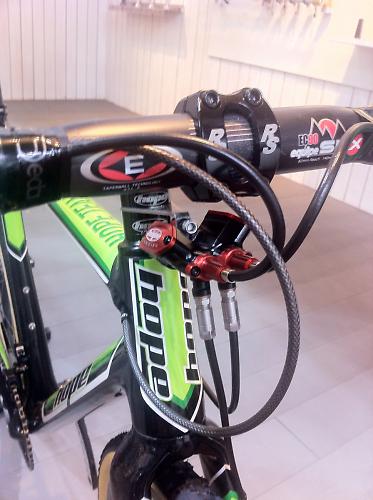 A dream-come-true for any heavily laden riders who always wanted dropped 'bars and disc brakes.

Still some way from final production and due to get a thorough test at the famous and forthcoming Three Peaks CX race, the snappily-titled Remote Master Cyclinder is a clever underslung stem-mounted device to allow a dropped-bar rider, on a cyclo-cross bike for example although it could just as easily be on a heavily-laden tourer or tandem, to use powerful hydraulic disc brakes in conjunction with cable-actuated STI-type brake levers. TRP have a similarly purposed deviced called Parabox in the works and referred to elsewhere in our Eurobike coverage (perhaps not yet - Jo doesn't write very fast - Ed) which only looks half as nice but will probably be half the price. We've been promised a Parabox to ride on the new Kinesis 'cross frame in a couple of weeks. Hope are unlikely to be letting the likes of us near this until their own team riders have done their work but as usual however well it works it looks like jewellery. 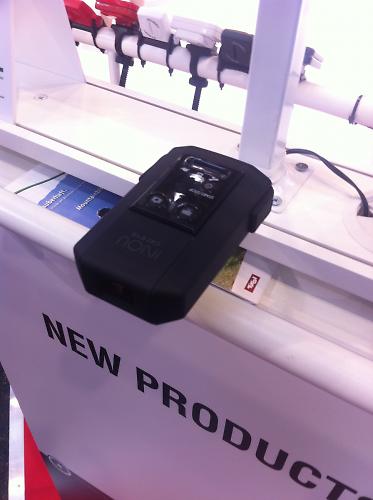 Stealthy black box sits on the 'bars and takes images as often as you programme in.

The £179.99 Cateye Inou box of tricks was on display as a new product although plenty of sneak peeks have been whetting the appetites of riders keen to document their rides, either for safety or more enjoyable reasons. Cateye is exhibiting at the forthcoming Cycle Show in Birmingham in a few weeks  - yes, we'll be running around as usual but the organisers will have to go some to match the sheer energy and activities of Eurobike.