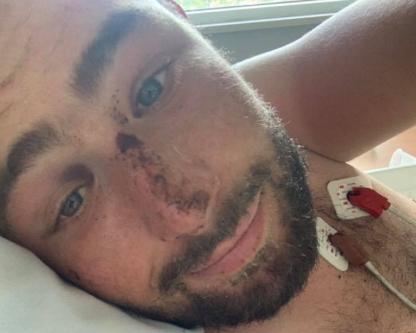 Round-the-world cyclist Josh Quigley says he is “still here, still smiling” after the horrific crash in Texas that left him with injuries including a fractured skull, ribs, pelvis and ankle as well as a punctured lung.

Posting on Facebook, the 27-year-old from Livingston, West Lothian, also set out what he knew about the collision at the weekend as he headed eastwards across the United States to complete the American leg of his trip.

> Josh Quigley seriously injured while riding across US

“I don’t remember much about it,” he wrote from his hospital bed in Temple, around 60 miles south of Austin, Texas, “but I’ve been told by the police that I was struck from behind by a vehicle driving at 70mph.

“After the vehicle hit me, I was launched off the bike and landed 50 feet away.

“This happened whilst riding at night wearing reflective clothing and with strong rear lights.

“I’m not yet sure what happened with the driver.

“All I know is that another vehicle stopped and attended to me and they called the ambulance.

“An ambulance helicopter arrived on the scene and I was flown to the nearest hospital.

“I can’t remember much of what happened, but I can vividly remember hearing the helicopter and being aware that I was in a helicopter.”

After detailing his injuries, he said: “It’s looking like at least 6-8 weeks before I can walk again or ride a bike.

“But for now I’m just happy to be alive! I won’t get to finish this year!

“But as always I will find a way to overcome this and finish what I started.”

In a subsequent post earlier today, he wrote: “Still here, still smiling. Shout out to the doctors and Nurses at this hospital in Texas.

“Couldn’t be looked after any better right now and very grateful to be in such good hands.

“Looks like I’m going for surgery very soon this morning.

“I also just done the toilet for the first time on my own since my accident,” he revealed, adding, “It’s the little things … ”

Quigley, who campaigns on mental health issues, took up cycling after attempting suicide in 2015.

This is the seventh time he has attempted to ride around the world and even before the weekend’s collision he had encountered a number of problems during his latest trip.

Last month, he had to fly back to Scotland from Australia to obtain a new passport after sweat rendered his previous one unusable.

And earlier in the trip, prior to leaving the UK, he picked up a ticket for riding in a pedestrianised area of Bedford town centre and also had his bike stolen while he was having a coffee at London’s Borough Market.