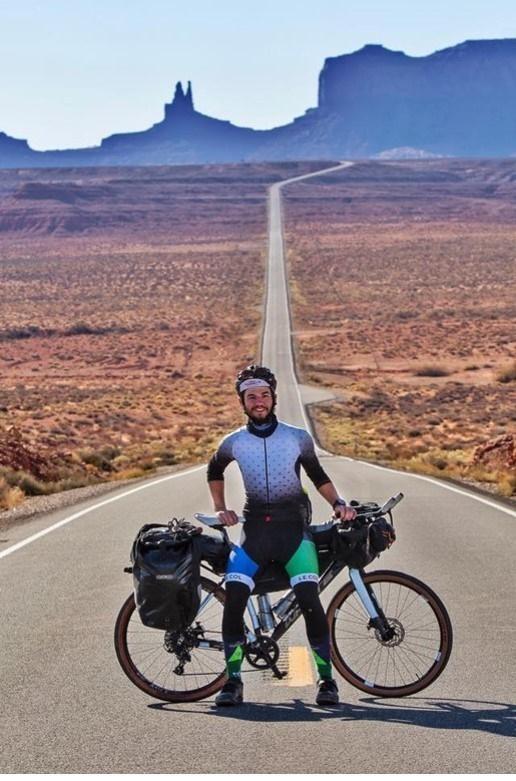 Medical student uses gap year to ride round the world

David Haywood is among the youngest to have completed the journey westward, into prevailing winds
by Alex Bowden

David Haywood from Surrey recently spent his gap year undertaking a 21,619-mile/34,793km westward circumnavigation of the globe by bike. He visited 33 countries in 349 days and got back in time to start his medical degree at Queen's University, Belfast in September.

23-year-old Haywood – who set a Guinness World Record for ‘most countries visited by bicycle in seven days’ in 2017 – is thought to be the youngest person to ride around the world westbound.

Being the youngest person to circumnavigate is no longer an official Guinness World Record due to safety concerns, but Haywood did follow the rules for an official circumnavigation, cycling a minimum of 18,000 miles (29,000km), in one direction, on one bike, passing through two points on the opposite side of the earth (Madrid, Spain and Wellington, New Zealand).

Most riders tour eastbound to take advantage of the prevailing winds. Haywood, however, was prepared to take on 40-50mph winds across the American Midwest and in the deserts of China and Central Asia to take the less conventional route because he wanted to travel across the US the way it was discovered.

“Touring westward meant that not only do you get to meet all the other cycling tourers coming towards you on the road, but also that you have to spend much more of the adventure alone,” he said. “I only rode with others for 14 days out of 349.”

Haywood said that he enjoyed riding solo as, “it forces you to take full responsibility for getting from A to B each day, where there's no one else to lean on.”

Challenges included negotiating with the Chinese police in the secretive Xinjiang region, trying to fix a puncture in the monsoon in Northern Queensland and “trying to keep calm when an unidentified animal is attacking your tent when it's -12°C in Texas.”

He said: “Commitment to a goal big enough and motivating enough, like conquering a world cycle, will hopefully drive you to take responsibility for your actions and to overcome, rather than hide away from such challenges.”

Riding solo also meant Haywood could ride however far he wanted each day, allowing him to complete 317 miles / 510km in a single ride from Geneva to Paris.

He said he completed the whole trip for less than he would have spent commuting into Central London for work each day, living on a budget of around $10USD a day.

“Receiving hospitality and support from people all over the globe, who often don't have much, is incredibly humbling and challenging, forcing you to recognise the relative wealth you're born into just by growing up in Western Europe, and perhaps how much more generous and hospitable you could be,” he said.

He spent 75 per cent of the trip either camping out or staying with friendly local people to learn more about the areas he was staying in and to keep costs down.

You can find his blog, a route map, social media updates and ways to donate to the anti-modern slavery charity he was raising money for at https://david-haywood.com/

As well as returning to his medical studies, Haywood is now looking return to competitive triathlon and qualify for the Ironman Triathlon World Championships.

David Haywood
Around the world