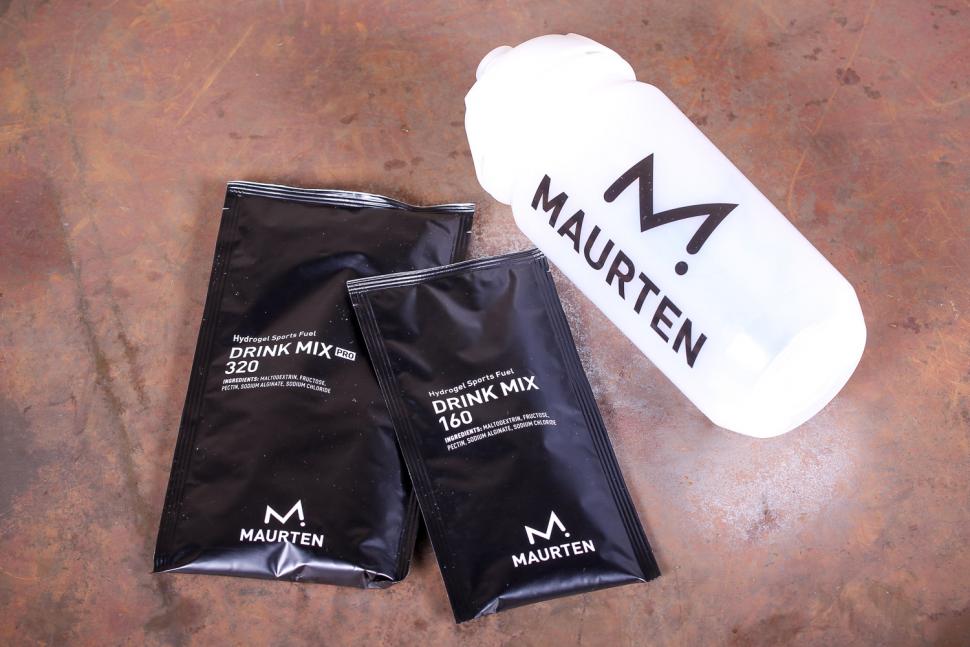 A new study has concluded that cyclists taking a hydrogel drink mix reported no improvements in gastrointestinal comfort or performance - but hydrogel sports nutrition brand Maurten, who recently fuelled Eliud Kipchoge to the first sub-two hour marathon, claim the study didn't put subjects through a tough enough workout to bring on GI issues their product could help to alleviate.

Arguably the most renowned hydrogel nutrition brand with a star-studded list of sponsored athletes, Maurten (as reviewed by road.cc last year) claim the addition of pectin and sodium alginate to their very high carb drink mix allows the stomach's natural acid to minimise GI distress and maximise the amount of carbs you can absorb. Their most potent drink mix contains 80g of carbohydrate per serving, and also includes maltodextrin, fructose and salt.

The study, published in the European Journal of Applied Physiology, is simply titled 'Carbohydrate Hydrogel Beverage Provides No Additional Cycling Performance Benefit Versus Carbohydrate Alone'. Nine endurance-trained male cyclists were put through three experimental trials consisting of a 98 minute test with various intensities, followed by ten consecutive sprint intervals. They completed a test drinking a hydrogel beverage, one drinking an isocaloric maltodextrin-fructose mix, and another including isocaloric maltodextrin only, ingesting 78g of carbs per hour.

The researchers found no difference in sprint power between treatments, and there were 'no systematic differences in gastrointestinal discomfort symptoms observed between treatments'. Therefore, the study concluded that ingestion of a maltodextrin/fructose hydrogel beverage during high-intensity cycling didn't improve gastrointestinal comfort or performance compared to the two control beverages.

Another study has since been published in the Journal of the International Society of Sports Nutrition that analysed the effects of hydrogel drinks on cross-country skiers. Again it found that the specialised solution was 'well-tolerated', but didn't improve performance.

So, could it actually be possible that elite cyclists and marathoners are simply reaping the benefits of some serious placebo effects and nothing much else? road.cc put the findings of the first study to Maurten, and their Head of Communications Herman Reuterswärd responded by saying its findings were actually in line with what they would expect based on the study design. Reuterswärd said: "We really welcome all science and think that more money should be invested in this area. Looking at the study, the results are in line what we expect, based on the study design and how it's executed.

"As is stated in the report, trial conditions were not tough enough to evoke serious GI distress; especially not during the first 98 minute varied-intensity cycling bout when the drinks were ingested. Therefore, it's very hard to say anything about the Hydrogel Technology and it's role, which is aimed at trying to reduce GI distress when consuming carbohydrates."

No peer-reviewed, independent research is yet to surface that concludes Maurten actually does offer better nutrient absorption with reduced GI distress; although the company have been claiming that research is coming for at least two years, according to sports science journalist Alex Hutchinson.

Is Maurten the real deal? We'll be interested to see the results of further studies into hydrogel formulas over the coming months...

1
Grant Shapps: Cyclists should have number plates, be insured and subject to speed limits
2
Is a 13-speed Campagnolo road groupset on the way?
3
Roy Keane says cycling is his only way of keeping fit – but he’s “not exactly Sean Kelly”
4
“I have honour, integrity”: Phone driver launches bizarre rant at CyclingMikey – before mounting footpath
5
Italian amateur accused of motor doping after winning iconic gran fondo
6
New protected bike lanes will benefit both cyclists and businesses, Camden Council says
7
Do you need a solar smartwatch? This week's five cool things coming soon from Garmin, Shimano, Vel, Spatz and HJC
8
"We shall never see his like again": Remembering Mike Burrows