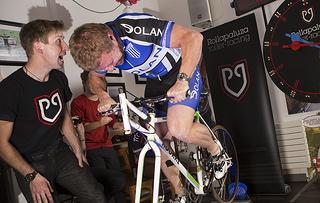 Final co-founder of roller racing business to focus on campaigning with Extinction Rebellion; offers invited to take on business
by Simon_MacMichael

Rollapaluza, whose rigs have been ridden by Olympic legend Sir Chris Hoy and schoolkids who have never before seen a track bike, far less ridden one, is set to cease operation at the end of the year as its last remaining co-founder shifts his focus to campaigning with Extinction Rebellion to urge governments to take urgent action on the climate crisis – although offers are being invited from anyone willing to take the business on.

Caspar Hughes is one of three cycle messengers who set up the roller racing business in 2007, back when the boom in fixed-gear bikes in London was reaching its peak.

They helped revive it as a sport, and since then Rollapaluza’s rigs have featured at everywhere from cycling events – they were present at the Prudential RideLondon Freecycle on Saturday – corporate events, schools and other venues, both in the UK and around the world.

Hughes is the last of the three founders still involved in the business, but in recent years his focus has shifted towards campaigning, whether as a member of the organising group of Stop Killing Cyclists or, more recently, Extinction Rebellion, with whom he was involved in the takeover of Waterloo Bridge earlier this year.

The business says that it is “really proud of the work we’ve done in building the Rollapaluza experience and brand, we would like to see Rollapaluza continue with someone new at the helm,” and anyone “interested in finding out more about this business opportunity” is requested to contact Hughes by //Caspar [at] rollapaluza.com" target="_blank">email.

It will also continue to accept bookings until 31 December this year, and if you are interested in putting on an event, you can contact them //info [at] rollapaluza.com" target="_blank">here.

Hughes said: “Over the last decade we’ve brought the enjoyment of roller racing to tens of thousands of people, running national series, TV events, enabling thousands of children to make at least one short hard physical effort a day.

“Doing this has brought a great deal of pleasure into my life, but now it is time to move on. The unfolding climate catastrophe requires a great deal more of our focus than is currently being offered and I intend to throw my weight behind Extinction Rebellion.

“In the coming years we will need future generations to move away from a transport system focused on car journeys. Rollapaluza has often been the starting-point for conversations about how cycling is a simple yet brilliant alternative to driving.”

He continued: “Rollapaluza has bought the joy of cycling to many people, including those who can’t ride a bike. There are few greater pleasures than watching children participating and hearing the rest of the class screaming in encouragement at the racing.

“As much as I have enjoyed running cycling events for the past eleven years, it is time to move my focus onto matters of a more urgent nature and nothing is more urgent than trying to slow the pace of the climate breakdown, we have 18 months to start radical climate action,” he added.

“I won’t be able to look my child in the eye unless I can say that I’ve done everything in my power to avert the looming societal collapse.”

A couple of years ago, Hughes outlined Rollapaluza’s most memorable moments as it turned 10 years old.

> Rollapaluza's Caspar Hughes shares his highlights as it turns 10 + video

One of those was Craig MacLean – one of only two athletes ever to have won medals at Olympic and Paralympic Games – hitting an astonishing 142mph on one of the static rigs.

Safe to say that the writer of this article, when invited by Hughes to swing his leg over one of the Condor bikes and give Rollapaluza a bash at the Mr Porter London Nocturne at St Paul’s a couple of years back, didn’t come close to troubling the scorers on that one.