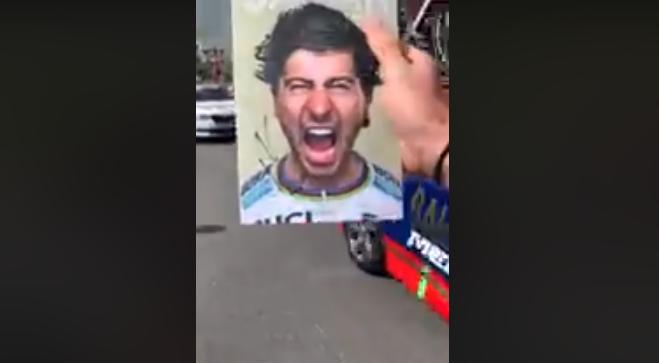 Some of the weird and wonderful videos we've spotted over the weekend...
by Simon_MacMichael

It's been some weekend at the Tour de France with a couple of absolutely cracking stages in the Pyrenees - but there's been a fair bit going on away from the front of the race and here are some of our favourite videos we've spotted.

First up, we have Peter Sagan being ... well, Peter Sagan. It's not unusual for fans to try and give riders something during mountain stages - a bottle of water, a newspaper ahead of a descent and even (as happened to Adam Hansen a few years back) a cold beer coming over the final climb of the race.

Here's a new one, though. Ahead of Saturday's climb of the Tourmalet, at the back of the race, a fan runs alongside the three-time world champion, profferring Sagan a pen and copy of his autobiography, which comes back duly signed. Pure class.

Meanwhile, at the finish, Groupama-FDJ manager Marc Madiot was getting rather excited at Thibaut Pinot's stage win which, together with the French rider's efforts today, have recouped the time he lost during to crosswinds on Stage 4 and put him right back in the hunt for the yellow jersey. Fair to say he got a bit excited and he also spoke about his reaction to ITV's Daniel Freibe this morning..

"I remember the days we had both team cars behind the grupetto and our riders were fighting to make the time limit."@friebos caught up with Marc Madiot after his wild celebrations went viral following Thibaut Pinot's win on stage 14 pic.twitter.com/thu9xbMu8X

Meanwhile, here's race leader Julian Alaphilippe raising an eyebrow or two about having French President Emmanuel Macron chatting to Pinot behind him.

And finally ... Some fans paint the names of their favourite riders on Tour de France climbs, others paint penises ... and it turns out that ASO has a way of dealing with the latter.

Dutch TV have made a short film about the TDF crew whose job it is to spot painted genitalia on the road and adapt it beyond recognition. This is a high art form.