Live blog: Kittel back on the bike (and cake and beer) – but not shaving his legs; Giro rider asks how much beer he must drink to replenish calories after monster stage (answer – A LOT); James Hayden makes a splash – inadvertently (video) + more 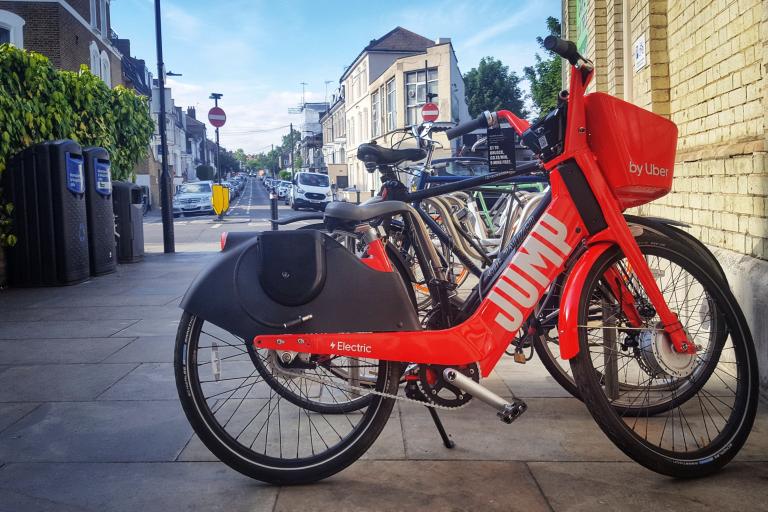 Uber's Jump bikes are now out in the wild in London

They launched in the capital last week ... we spotted this one at Acton Central Overground on Friday evening. We also saw a couple being ridden past the Houses of Parliament yesterday ... it's difficult to miss them. 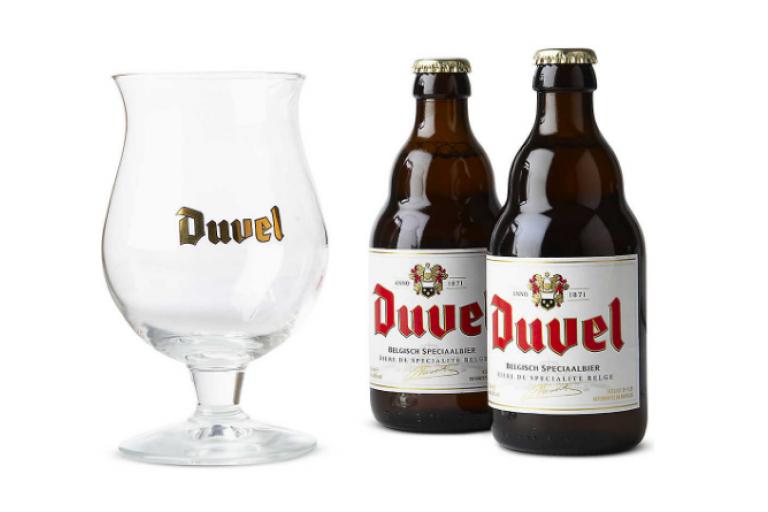 A Giro d’Italia rider asked on Twitter how any beers he needed to down to replace the Calories burnt in Saturday’s monster stage in the Dolomites … and the answer was one that would leave even the most hollow-legged of beer aficionados legless, never mind a cyclist at the end of a three-week Grand Tour.

“Can anyone tell me how many beers I need to drink to replenish?“

Eurosport commentator Rob Hatch suggested that Daniel Lloyd, who has been working for the channel during the race, might “know something about that.”

Then you'd have enough left over for a Bud Light, but I wouldn't bother with that bit.

“I’m gonna have a funny night, then,” replied Guarnieri.

“More than you could manage, no doubt,” he said.

We’re not sure whether he took up Lloyd’s advice of downing a baker’s dozen plus one bottles of the 8.5 per cent ABV Belgian beer … but he finished 117th out of 142 riders in yesterday’s concluding individual time trial in Verona.

Marcel Kittel, who recently announced he was taking an indefinite break from pro cycling, is back on his bike, plus the beer and cake ... but he's not shaving his legs. (As spotted on the German rider's Instagram account by road.cc reader Josh Owen Morris, though the pictures in question seem to have disappeared now).

Marcel Kittel has come back to the surface over on Instagram. Clearly loving life, he's gone cycle touring on the old East/West German border, eaten cake and er grown his leg hair. pic.twitter.com/mSA76ugn3g

The ultracyclist has been dipping his toe in the water with mountain biking, riding the Highland Trail 550 last week - and he made a splash, though not in the way he intended ...

When you've only been riding a mountain bike for an hour, but you're one to always jump in at the deep end... I saw Dustin nail the river crossing and thought I'd have a go! #ht550 @HT_550 #mycanyon pic.twitter.com/pQ8wW81csq

It's #WorldBicycleDay today! Go out for a ride, it's good for you and the planet! @UN @UNEnvironment @c40cities pic.twitter.com/ckUqzYEH4w

Are you kidding me?! Woke up this morning to find out my @TrekBikes Madone is stolen! It was in the team bike room @LottoLadiesTour in the middle of a row of bikes from @knwu. Please RT or let me know when you saw anything pic.twitter.com/MSU7Ga7jQY

Thanks for all the retweets about my stolen @TrekBikes Madone. Most likely somebody from another team in the hotel stole it, as only these people had access to the room. Somebody surely knew what he/she was looking for. Cheers to all the sympathy on twitter! pic.twitter.com/H15i4uZ1hz 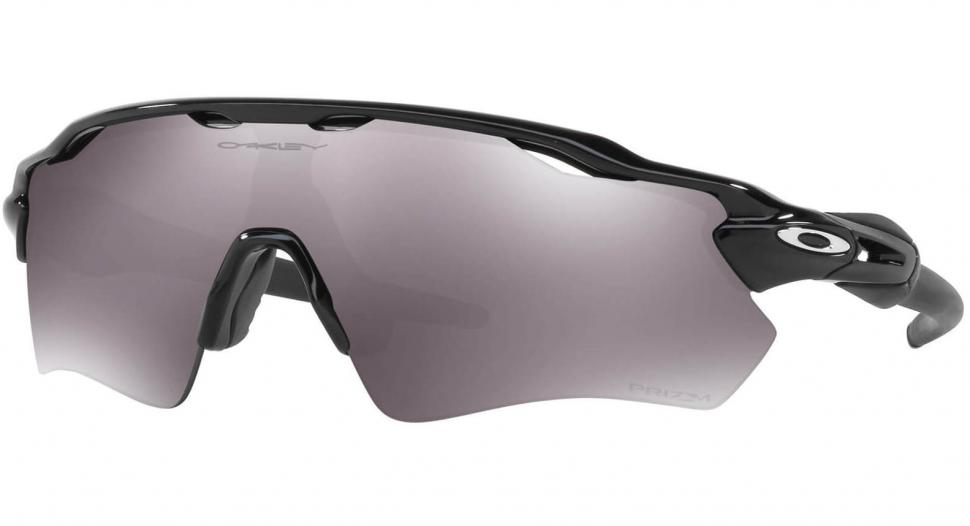 If you're looking for a new pair of sunnies then we'd highly recommend Oakley's Radar EV. They're secure on the face and the lens offers great clarity.

The final episode of Mitchelton Scott's Grio d'Italia.
The team missed their big goals with Simon Yates finishing 8th, 7'49" down on a very impressive Richard Carapaz of Movistar.
But it wasn't all bad news. The race saw fan-favourite Esteban Chavez returning close to the form of a few years ago. He took an emotional stage win late in the race.

Make sure you follow us on all the social media platforms to see what we're reviewing and some general road .cc nonsense. As a little taster, his is a look at one of the latest review bikes.

Another delivery to road.cc towers. We will be seeing if this #Vitus has some substance to go with its style... With SRAM Apex and WTB tyres this Vitus Substance CRX comes in at just under £1800. #cycling #vitus #sram #bikes

It happened to AG2R U23 rider Matteo Jorgenson during yeterday's race (which was won by the Team Wiggins-Le Col rider, Tom Pidcock).

Roubaix Espoir for me You can be third wheel and still get crashed. Waiting for surgery due to someone disc rotor Didn’t believe they could do this until it happened to me. Thankful for my parents being here pic.twitter.com/K1kBxLwP6J

so i know we were all worried about disc brakes being unsafe, but can we talk about sharp thru axle levers? pic.twitter.com/Qa8QIZ5cM7 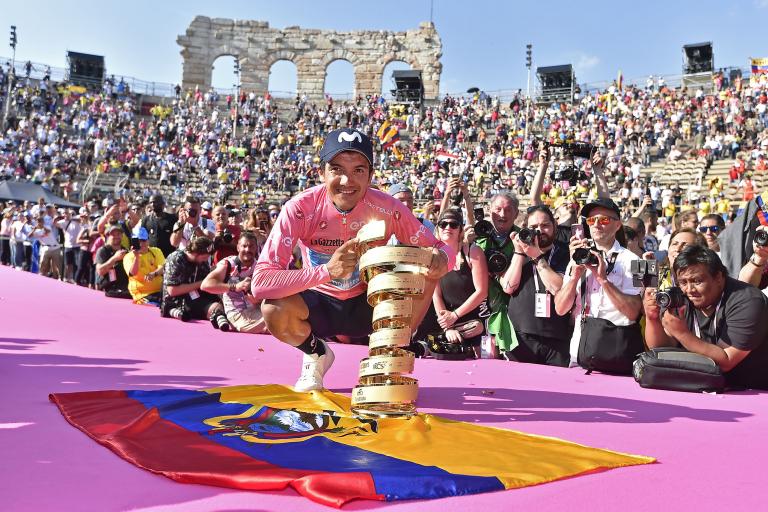 Some stories you may have missed at the weekend

He’s the first rider from Ecuador to win a Grand Tour – and a national hero now.

It was all happening on Stage 20.

“Breath-taking is the only way I can describe it,” says Millar

MP suffers broken hand after getting doored while cycling in Bournemouth

And Chris Grayling was nowhere in sight.

"I've put 10kg on because I was severely underweight" says Wiggins

They didn't call him Twiggo for nothing.