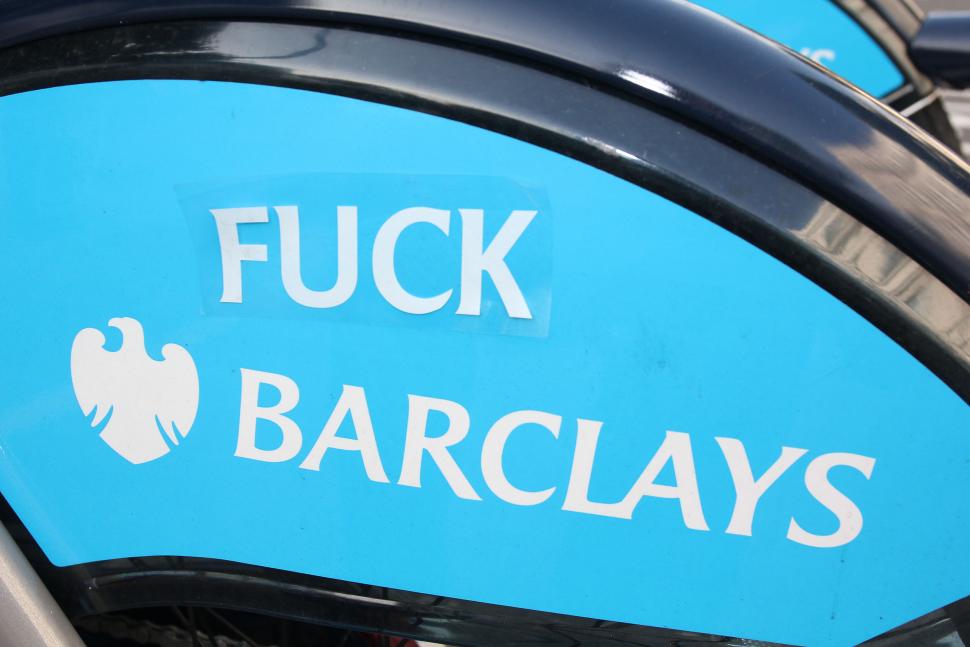 *delete according to choice
by Tony Farrelly

London's cycle hire bikes have proved massively popular with Londoners – 95,000 people now registered as members of the scheme but Barclays involvement as sponsor has not proved quite so popular and with two concerted adbuster-style sticker attacks cursing Barclays' name

A posting on the Wooster Collective blog back in September first alerted us to the anti-Barclays sticker campaign, but further investigation reveals that London's hire bikes have been getting the abusive sticker treatment since launch - with two big attacks involving hundreds of bikes – one on launch day and the other in mid-September this time involving hundreds of bikes at over 40 locations and all putting the curse on Barclays.

“There have been a couple of incidents of sticker vandalism since the Barclays Cycle Hire scheme launched on 30 July. On the rare occasions that it happens, they are removed by our maintenance and redistribution teams, A Transport for London spokesperson told road.cc.

Apparently the stickers come of pretty easily (as our picture shows), so no actual damage to the bikes - just Barclay's dignity. Even so TfL are treating the sticker attacks (and cases of bill stickering) as vandalism as TfL's spokesperson told us.

“Barclays Cycle Hire is a scheme for all Londoners, and we hope people will help us to respect and protect the Capital’s new public transport system, as these bicycles belong to all of us. If you do see anyone damaging the bicycles or docking stations, please do help us by reporting it to our contact centre who will report the vandalism to the Police.”

Realistically there isn't that much that can be done to stop people stickering bikes in the street - there are almost 6000 of them out there after all and it would be no surprise given the numbers of bikes and the number of stickers involved if some stickered bikes slipped through the net. Our TfL source thought there was more than one group of sticker makers involved - going by the differences in the stickers used - some have been more crudely executed than others - all though share the same anti-Barclays message. Certainly the stickers we saw were pretty slick. We spotted two variations both on the same theme and both bearing the same er, wording. One a blue paper affair colour matched to Barclays corporate colours (earlier ones didn't get the Pantone colour quite right, apparently) and stuck on the down tube of a bike and another clear plastic sticker stuck next to the Barclays logo on the rear wheel fairing. The latter in particular was subtle and well executed enough (they've matched the Barclay's corporate font) that at first glance you would hardly notice it… an almost subliminal bit of anti-advertising.

So who would do such a thing? Anti capitalist protesters, people that bank with Barclays, or maybe those uneasy with the whole big brother aspect of Barclays' involvement with the scheme one such possible perp broke cover yesterday iin the pages of the Daily Telegraph… obviously he'd have needed accomplices too.