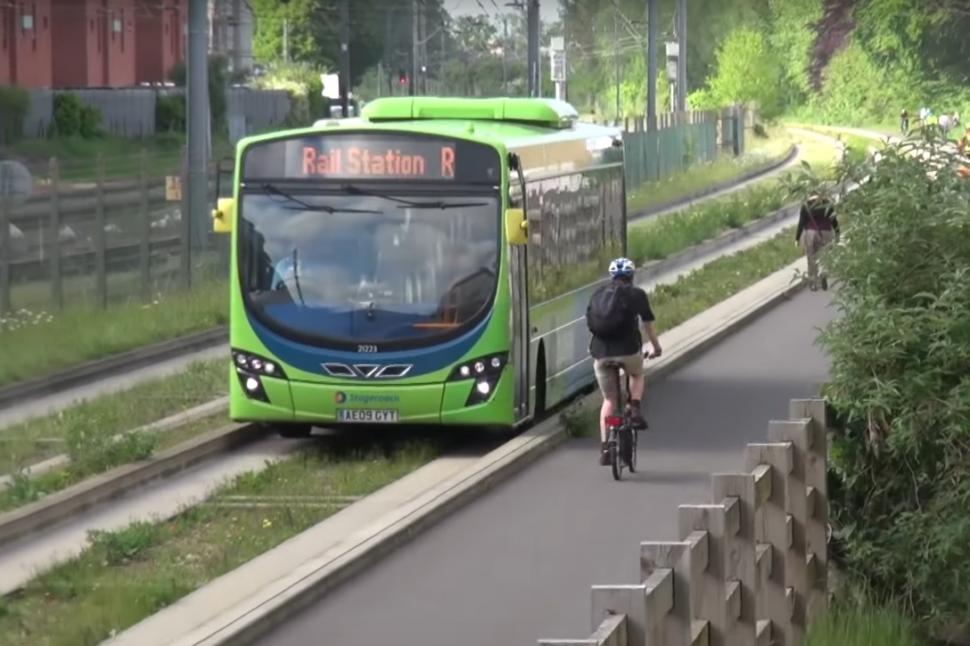 The family of a cyclist who was killed on the Cambridge guided busway have expressed frustration that few safety improvements have been made in the wake of his death. Steve Moir died in a head-on crash with a bus after he clipped the kerb separating him from the busway while overtaking pedestrians. His family have called for the installation of barriers.

The Cambridgeshire Guided Busway connects Cambridge, Huntingdon and St Ives, with an asphalt cycle track/bridleway alongside some sections of the route.

Once the specially adapted buses are on the busway, the driver does not need to steer. Guidewheels perform the steering function by engaging with the concrete kerb.

On September 13, 2018, Moir was riding home to Sawston from Cambridge on a section of the cycle track between Long Road and Cambridge's railway station when he attempted to pass a group of pedestrians.

As he steered left, his front wheel clipped the kerb between the path and the busway and he fell directly into a bus’s path. He died at the scene.

Speaking after the inquest, Moir's brother Rob said the family welcomed the fact that bus speeds had subsequently been reduced to 30mph in that area and that white lines had been painted alongside the kerb.

However, he also expressed the family’s belief that, “without physical separation the likelihood of this happening again is quite high – especially with the number of people that use that stretch."

Speaking to the BBC this week, Rob expressed frustration that this has still not been addressed.

"We've been lucky that nothing similar has happened in the last two years,” he said.

"I spoke to his three sons and they are incredibly frustrated – they feel like nothing has been done in those two years to prevent a similar accident occurring.

"They just said it seems like the authorities aren't really bothered about the fact that their dad died."

An investigation by the Health and Safety Executive (HSE) is still ongoing.

A spokesperson said: "We are ever conscious of the time it takes to complete an investigation and its impact on the families involved.

"This is a unique transport system and the death of Mr Moir was one of the first work-related fatalities on this system.

"We are doing all we can to bring this to a conclusion, while making sure that we reach the right standards of investigation."

Cambridgeshire County Council said because of the ongoing investigation it would be "inappropriate" to comment.