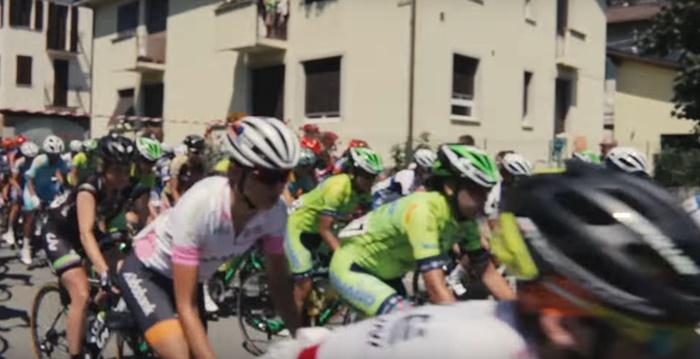 Former Cervelo-Bigla rider Doris Schweizer says she was pressured to ride with concussion during the 2015 Giro Rosa. The team's owner, Thomas Campana, was last year accused of abuse of power by bullying, fat shaming, intimidating riders and ignoring medical concerns.

Cycling News reports that Schweizer, a two-time Swiss road race champion who now rides for Bizkaia–Durango, wrote in a blog post: "I crashed hard and was not in shape to continue (regarding a bone-deep incision on the knee, I just wanted to stick a plaster on it, which already showed that I was not quite sane), let alone to another stage start.

“But as a noble helper, I did not have the 'right' to get out in favour of my health. The pressure was so great that resisting and driving home was simply not an option.

"I went to the race doctor and he didn't actually give me permission to start anymore, which also put me in a rather unpleasant situation, because I started the next day anyway ... It was my worst race.

“I could barely ride straight because I had huge problems with my vision. I was miserable. I was misjudging myself with distances and speeds. Total loss of control! Somehow I managed to finish the stage.”

However, she says that she still suffers as a result of the concussion.

“Sometimes I have extreme headaches, vertigo or difficulty concentrating. I handle stress and pressure worse [and] I sometimes have extreme mood swings… I would have preferred that I had broken 100 bones.”

In November, Dutch newspaper de Volkskrant reported Schweizer’s story along with a series of other allegations against Bigla team boss, Campana.

US rider Carmen Small said she suffered heart palpitations while previewing the 2016 Tour of Flanders and despite reporting this to Campana, she says she was not taken to hospital until late that night, where she was treated with blood thinners and kept in for observation.

It was also said that on a 2015 training camp in Fuerteventura, Campana refused to allow two young riders to eat carbohydrates and allowed them only water on rides because he said they were too fat.

Campana denied all wrongdoing, saying: “If you feel good mentally you can achieve success. Our programme is based on that.”

In Schweizer’s case, he said that he had followed medical procedure and accused her of hiding her concussion.

The rider says she is amazed that the team sponsor hasn’t got in touch with her.

"Even four months later, the Swiss main sponsor Bigla did not take the opportunity to catch up or to ask questions – but in my opinion, that alone also draws a clear picture," she wrote.

In 2016, Schweizer and nine others took their complaints to the UCI’s Ethics Committee. However, upon learning that the UCI would not accept anonymous allegations, many of them withdrew.

The others were told that as the incidents happened in 2015 and 2016, they fell under an older version of the UCI’s Code of Ethics that only applied to UCI staff and not teams and therefore  there was no legal basis to sanction Campana.

The UCI updated it's Code of Ethics later in 2016 to include teams and staff, while a more recent change allows plaintiffs to remain anonymous for cases of a sensitive nature.