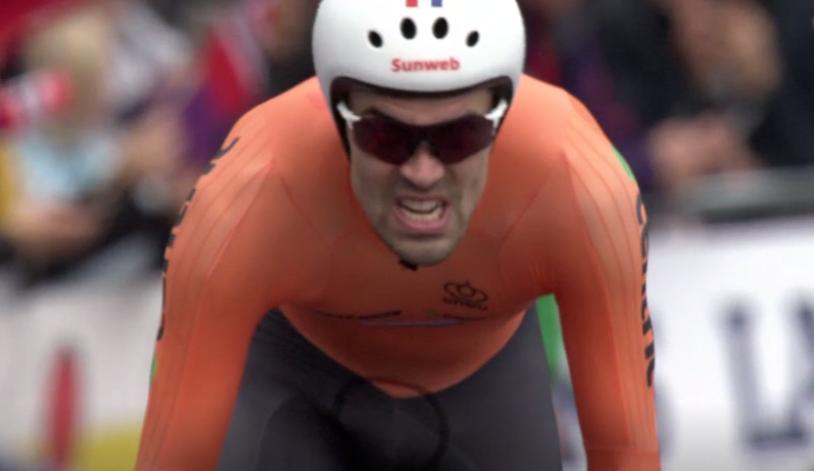 Tom Dumoulin of the Netherlands put in a dominant performance at the UCI Road World Championships to win the elite men's time trial today, with Primoz Roglic of Slevenia second and Great Britain's Chris Froome third.

Dumoulin was the penultimate rider out on the course, immediately after Froome, and from the start began taking time out of the British rider, who had been aiming to follow up his Tour de France and Vuelta victories by taking his first rainbow jersey .

The Dutchman, winner of the Giro d’Italia in May and favourite for today’s race, had a 34-second advantage over Froome at the third time check, which came after 16.1 kilometres, by which time heavy rain was falling on the course.

Similarly off the pace was four-time world champion Tony Martin of Germany, seeking to retain the title he had won most recently in Doha last year.

Just ahead of the closing climb, the 3.4-kilometre Mount Floyen which began with a series of tight hairpin bends, many of the riders who were out on the course early decided to switch from their time trial bike to a road bike.

It was a risky strategy – anything other than a perfect jump onto the bike and instant clip-in as the mechanic pushed the rider off would negate any potential advantage to be gained – and one that most of the favourites chose not to pursue.

Froome hit the bottom of that climb ceding around 50 seconds to Dumoulin, as did Martin, with the second fastest man at that point another former world champion, Vasil Kiryienka of Belarus.

The Briton had seemed set to overhaul Roglic to move into the lead, but lost time to him towards the top of the descent and crossed the line with Dumoulin, who had started 90 seconds behind him, on his heels has he took the rainbow jersey.

Martin tried valiantly to close the gap and get onto the podium, but finished in ninth place.