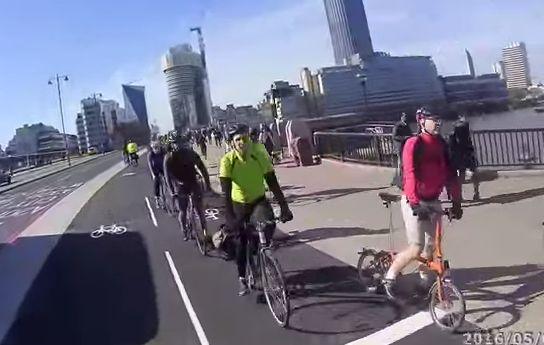 On the eve of today’s election that will decide his successor at City Hall, two videos posted to social media yesterday highlight the success of Boris Johnson’s flagship Cycle Superhighways.

The North-South Cycle Superhighway is now open from Elephant & Castle to Stonecutter Street, while the East-West route will be officially opened tomorrow morning.

Posting this video of the North-South route to YouTube, Andrew Larssen said: “In places it feels like it is already nearing capacity - amazing after only 3 days.”

Jono Kenyon of Hackney Cycling Campaign also took a video from the northern end of Blackfriars Bridge, where the two routes intersect, and posted it to Twitter.

What started as a river has become a flood. Time for the Uk to unlock the potential of cycling. pic.twitter.com/Tezh0xjahb

In November, Mr Johnson said that pushing through infrastructure such as those two major routes had been the biggest political challenge he had ever faced.

He told Assembly Members: “To be honest, this whole Cycle Revolution, which is really under way, is provoking the most incredible backlash, I’ve got to be honest with you.

SO MANY CYCLISTS on Blackfriars Bridge Superhighway! Amazing to see. We need more of this https://t.co/9ahYY5WexH pic.twitter.com/2bsUuwQgu1