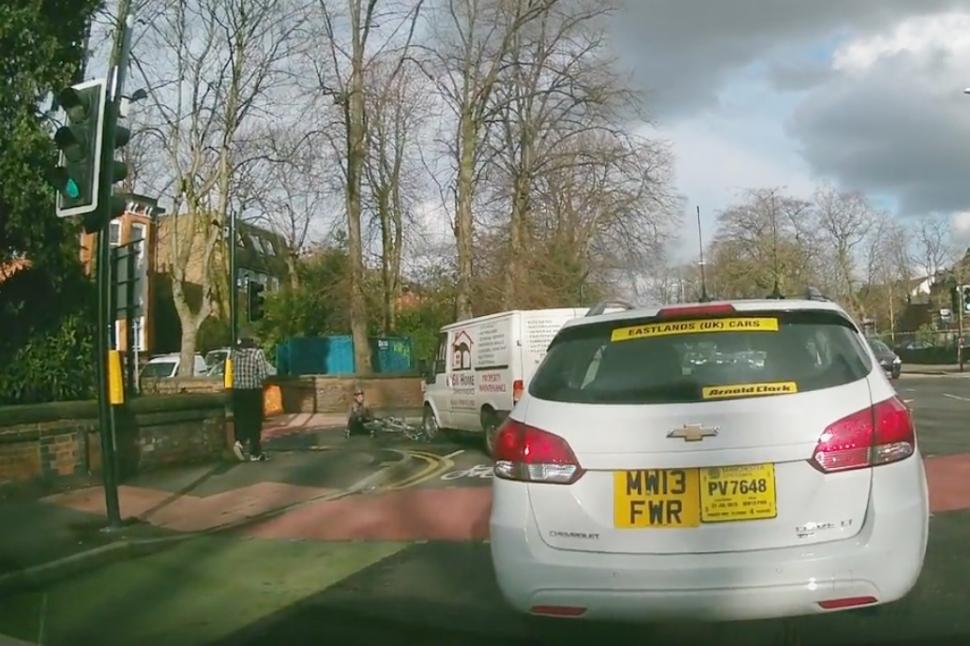 Cyclist hit by van on Wilmslow Road (taken from YouTube).jpg

Video: Collision on Wilmslow Road Cycleway – was it down to poor junction design?

A recent YouTube video shows a Manchester cyclist colliding with the side of a van after it turns left in front of her. The junction is part of the Wilmslow Road Cycleway and campaigners have suggested that potentially confusing junctions such as this could perhaps need redesigning.

The collision took place at the junction of Wilmslow Road and Mauldeth Road on Tuesday February 9 with the footage recorded by the dashcam of a motorist further back in the queue of traffic.

The cyclist is seen riding in the cycle lane, passing traffic outside her as the lights change to green, but she is then hit when the van turns in front of her. There is no obvious sign that the vehicle was indicating, but the view of it is obscured as it starts to turn.

The Manchester Evening News reports that the cyclist was uninjured. Michael MacDonald, the person filming from his vehicle, said:

“I couldn’t believe it when I saw what happened. I thought the woman would be badly injured considering the force of the crash.

“But luckily just after she was back up and seemed OK. I rushed out to make sure, and she asked the van driver whether he could ‘get off her bike’.

“Whether he was indicating before he turned I really don’t know – but the woman was calm and they were polite with each other. She certainly didn’t seem to be blaming him.”

However, writing at the Just Step Sideways blog, Dom says he believes that the design of the junction “played a big part” in causing the incident.

“The kerb separation finishes some way before the junction, with the cycleway continuing as a mandatory cycle lane, then ASL, then advisory cycle lane. This gives no protection and means there’s confusion on who has right of way.”

Dom contrasts this with ‘a typical junction of a similar size in the Netherlands’ highlighting give way markings on the road and other visual indicators.

Earlier this week, the Leader of Manchester City Council expressed concerns about the Wilmslow Road Cycleway project. A cyclist himself, Sir Richard Leese remarked: “On my journey, the biggest issue is the road surface – not whether I've got my own lane or not."

“The safety of cyclists and other road users is our top priority. The design of the junction of Wilmslow Road and Mauldeth Road is similar to many traffic light-controlled junctions where a cycle lane is included on the approach.

“The cycle lane is clearly marked across the entry to the side road to make sure other road users are aware that cyclists may be using it. However, as the scheme nears completion, we are entering into a period of reviewing the new infrastructure on Wilmslow Road and will include the comments on this junction within this review."