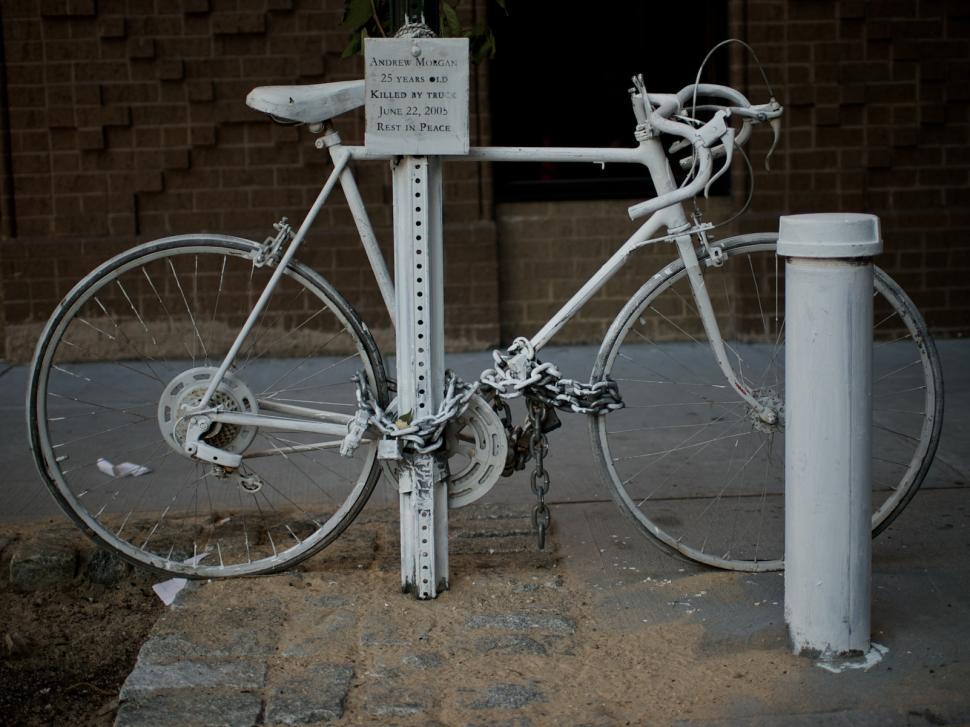 They stand, unnoticed by many, but for others a poignant reminder of the dangers cyclists face every day, in cities around the world, each commemorating a life cut short as a bike rider on his or her way to work, to go shopping, or simply hang out with friends paid the ultimate cost for simply wanting to ride on the road.

Now, a pair of film makers from New York City have embarked upon a documentary that seeks to chart the ghost bike movement, which commemorates fallen cyclists with a bike sprayed white at the point where they fell, and in the spirit of co-operation that has seen the phenomenon spread around the world, you can help finance the project for as little as $5 – not much more than the cost of a cappuccino.

The project, which aims to trace the origin of the movement “from San Francisco to St Louis to Pittsburgh to New York, and examining how it is manifesting in New York, Chicago, London, and Brazil” is the brainchild of a pair of New Yorkers, Meaghan Wilbur, who has spent a decade in film post-production and continues to ride her mothers old red Schwinn, and Thomas Perry, who recently completed New York University’s graduate film programme.

Wilbur and Perry are seeking to raise $2,500 in funding for the project, which will include a visit to London in June, and which will result in a feature length documentary, which “city by city… will reveal the stories behind ghost bikes and the people who make them.”

So far, $420, getting on for a fifth of the total needed, has been raised, and pledges for amounts including $5, which will get you an acknowledgement on the website and access to a behind-the scenes blog, $15, which will entitle you to a download of the completed film, or $500, which will see your name up in lights on IMDB as Associate Producer, can be made through the Ghost Bikes Film website.

Money pledged “will help cover the cost of equipment, crew, and travel expenses.” As the documentary makers point out, “independent films do not have the same freedom and ease as larger ventures with funding, and we've already made a lot of sacrifices to get this far along.

"We are committed to making this film," they continue, "even if it means sleeping on couches and eating PBJ sandwiches when we travel... but even DIY won't make a movie for absolutely nothing. Your support is needed and greatly appreciated. We've scheduled a lot of travel in order to complete the film, and are taking a leap of faith that it will all work out well in the end.”

Certainly if the clips of the work to date linked above are anything to go by, the end result is likely to be a reflective and thought-provoking film that pays tribute to those among us who never returned home from that ride.