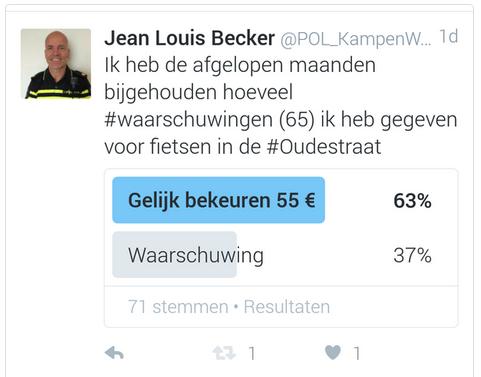 Local policeman praised for asking community how the law should deal with errant cyclists - but was the result predictable?s
by Sarah Barth

Twitter: love it or loathe it, when the Prime Minister is making major policy announcements on social media it’s probably fair to say it’s part of modern life and here to stay.

So perhaps it’s no surprise that police in the Dutch town of Kampen are using Twitter to crowdsource opinion on whether cyclists found in pedestrian areas should be fined.

According to Expatica, Jean Louis Becker, a local policeman, is using an online Twitter poll to canvas opinion on whether errant cyclists should be fined 55 Euros, or simply warned.

“The man in the street has spoken,” the policeman told the broadcaster RTL. “This is a great way of involving people more directly in police cases.”

Police in the UK have also been using Twitter as perhaps the furthest reaching arm of the law, to shame both cyclists and motorists who park poorly.

As road.cc recently reported, police in Cambridge finally turned their attention from badly parked bikes to poorly parked cars, issuing 11 parking tickets in one street in a week -  after cyclists slammed the police’s Twitter campaign as being misdirected.

The #daftparking Twitter campaign came after cyclists took to social media to shame drivers for parking their vehicles inconsiderately in the city following the police's #badlyparkedbikes campaign.

Sergeant Ian Wood told Cambridge News: "In response to #badlyparkedbike we received a number of photos of seemingly poorly parked vehicles. #daftparking was then devised to facilitate the submission of these types of photos.

"Cambridge police started to use the #daftparking to highlight the issues around parking and to ask road users to park responsibility, and within the law, to help the city traffic flow and prevent accidents and congestion.

"Although the council have primacy for parking issues, the photos will be used to identify areas where parking is problematic, however this is not a substitute for calling 101."

As any user of Twitter knows, there’s always a danger in Tweeting before thinking.

We reported in April how police in London were accused of victim-blaming and branding all cyclist as law-breakers after a picture of a car with a smashed windscreen appeared on Twitter with the caption, “Cyclists: Stop ignoring the rules or you could end up in an incident like this.” The tweet has since been deleted, and police have told road.cc they did not mean to cause offence.