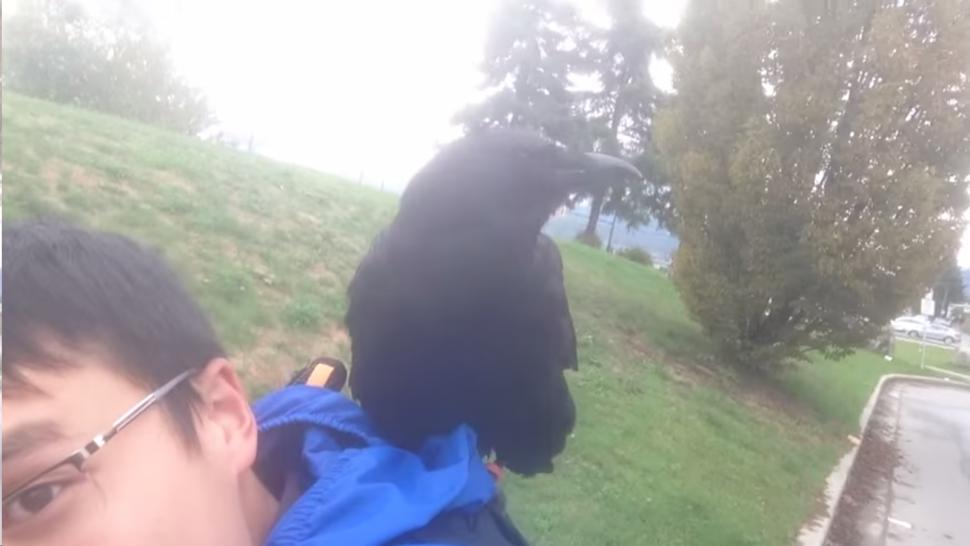 The bird may have mistaken the 19-year-old for someone else, according to one expert
by Laura Laker

A crow has attacked a cyclist in a bizarre encounter in Vancouver that has left marks on the man's knuckle.

Steve Huynh says he was on his way to work on Friday, and stopped when he saw a man stroking the bird on a street corner. The bird then flew towards him, landed on his back and started pecking his neck.

The 19-year-old cyclist took his camera out and started filming the incident, which uploaded to his YouTube channel, and which he later described as "pretty cool but terrifying".

Huyn told CBC News: "It attacked my knuckle. When it was on my back, that's was when I was terrified because I couldn't look back."

"How often do you see something like that, right?"

The bird can be seen on Huyn's rucksack, pulling at it with its beak. Huyn takes off the rucksack and the bird, which appears to have a red tag on its left leg, continues to peck at the bag, intermittently flying at Huyn while the man he says was stroking it looks on.

This is perhaps the most surprising animal attack we've seen yet because even though crows look mildly sinister it's more in the line of a baddie from a children's cartoon than an extra from a Hitchcock movie. However, there is a possible explanation for the attack.

Derek Matthews, from Vancouver Avian Research, says unlike other birds those from the corvid family, which includes crows, ravens and jackdaws, can recognise faces and may have mistaken the cyclist, his clothes and/or rucksack for someone with whom it had previously had an experience.

"They will get to know people as individuals," said Matthews. "This is almost certainly what's happened in this situation."

This, he says, would explain the bird allowing itself to be stroked by the other man.

Matthews advises anyone who encounters an angry crow to move along and remember: "crows are not evil ... they're just trying live their lives, feed their families, feed themselves, just like we are."

The video has had more than 47,000 views on YouTube since it was uploaded on Friday. Although evidently shaken up at the time Huyn was keen in his video to say the bird was unharmed during the encounter.