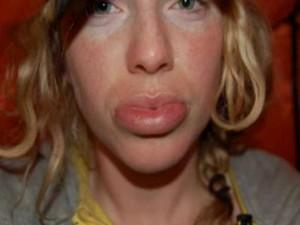 Remember Lindsey Cole? She's the unemployed journalism graduate who, for the want of anything better to do, is cycling to the World Cup in South Africa to raise £5,000 for charity. And, by the look of this picture, she's pretty fed up about it.

Actually, that's not true. The 27-year-old, currently pedalling through the deserts of Sudan with three gentlemen travelling companions, was bitten on the lip by a mosquito in Egypt, and the swelling took four weeks to deflate.

“We think it was a mozzie,” she wrote on her blog, “so anyone who’s considering collagen, just catch a mozzie and stab your lips forehead or wherever’s fashionable to be pumped up nowadays. 12 hours later it’s still pretty juicy!”

The four have been on the road for about six weeks and so far have raised almost £2,000. Unsurprisingly, there've been a few adventures en route, and not-unattractive Lindsey has had to deal with the attentions of Arab men as well as mozzies.

Perhaps this has inspired her to shave her head, which she keeps promising to do if the target reaches £5,000 before she hits South Africa. “I’ve always wondered what it would be like,” she writes, “and if Britney can do it then why not I? Plus, it will be cool in the African heat and possibly shy away those amorous men. And, hopefully grow back to a relatively respectable length by the time I get home in August-6 months. Don’t worry mum-it will grow back!”

The team left Khartoum a few days ago and are trying to catch up on the miles after a couple of days' rest. To make up the time they rode at night, but Lindsey accidentally cycled into a pothole and buckled her wheel. Luckily they caught a lift from a passing truck. Her pannier rack was also broken so the bike was taken to a local bike shop for repair, a video of which is on her site.

To support Lindsey and her companions, visit her Just Giving site here.