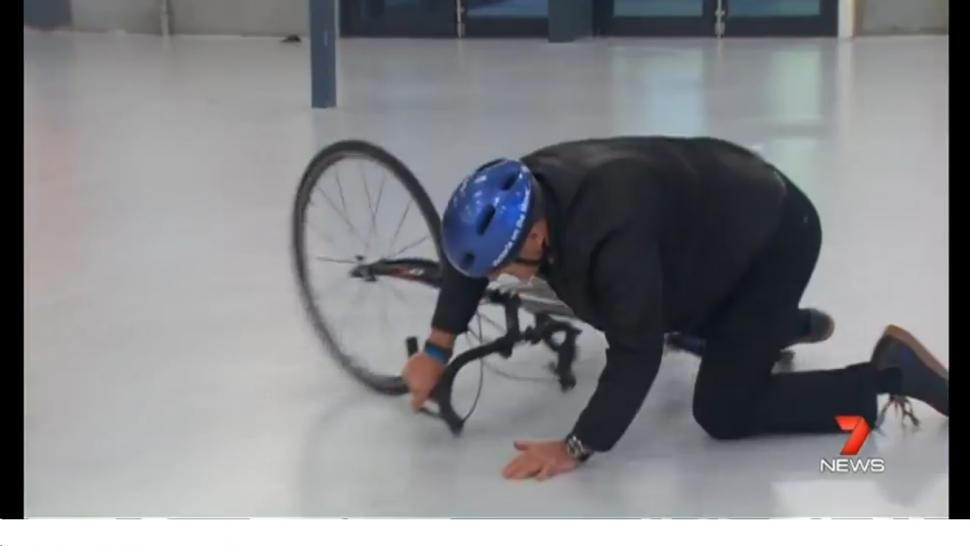 It doesn't look like Jeff Kennett has cycled in a while...but it's for a good cause...
by Laura Laker

Former Australian politician, and media commentator, Jeff Kennett, took a spill on a bike while riding indoors at the launch of a father's day charity cycling event.

Kennett, 67, who was the Premier of Victoria between 1992-1999 and is founding chairman of mental health charity Beyondblue, was filmed wobbling on a road bike on what looks like a polished concrete floor, before his wheels lost traction while cornering, sending him to the ground.

Kennett, who was uninjured in the fall, said to the assembled cameras "don't any of you show that, will you?".

Kennett, who wore a keepsake from his days as Victorian Premiere said: "This helmet was given to me in about '93 when we adopted the slogan Victoria - On the Move."

However, it looks possible Kennett may not have ridden a bike since then, as he wobbled along among kids and other men on bikes.

Beyond Blue works to raise awareness of anxiety, depression and suicide.

The Jasco Telstra Father’s Day Bike Ride, on September 6, will see fathers and their families cycling around the Albert Park Grand Prix Circuit in Melbourne to raise money for charities Movember and Auschild.