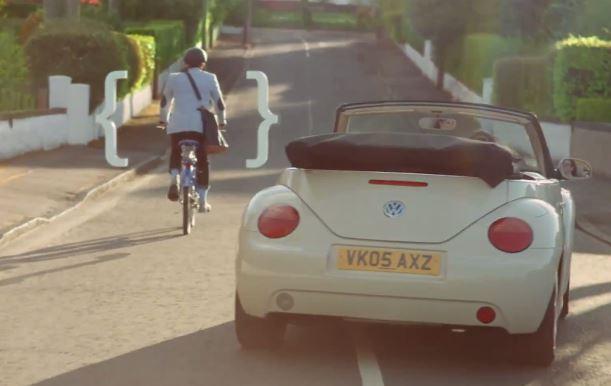 Cycling Scotland's new campaign says Give Everyone Cycle Space - but is it enough room? (+ video)

New video seems to suggest an arm's length is enough ... and there's barely a car in sight...
by Simon_MacMichael

Cycling Scotland has launched its new road safety awareness campaign, Give Everyone Cycle Space – but some commenters on social media claim the room motorists are suggested to give people on bikes when overtaking them is not enough.

According to Cycling Scotland, the four-week Scottish Government-backed campaign, which is running on a variety of media including TV and on buses, bus shelters, phone boxes and online, is “primarily aimed at people in cars.”

Some may find it curious, then, that during the 30-second spot, while plenty of cyclists appear – with parentheses around them positioned at arm’s length, indicating the room other road users should give them – there is only one motor vehicle shown, a VW Beetle.

The video has some similarities to one of those used in 2013’s much criticised Nice Way Code campaign from Cycling Scotland, also financed with the help of government money.

Again, that advert (initially subject to a ban by the Advertising Standards Authority, later overturned, since it showed a cyclist without a helmet) had a solitary driver giving a cyclist plenty of room when overtaking, without any other vehicles in sight, not even a parked car.

That’s far from the reality many bike riders have to contend with on a daily basis, and even when physically separated infrastructure is provided, this picture tweeted earlier this week of a new segregated cycle path in Edinburgh suggests there is a long way to go until some motorists in Scotland give cyclists any room at all.

While some people on social media – including John Lauder, director of Sustrans Scotland – have welcomed the latest campaign, others have criticised it saying the passing distance suggested is insufficient.

Rule 163 of the Highway Code says that motorists “should give motorcyclists, cyclists and horse riders at least as much room as you would when overtaking a car.”

That’s accompanied by an illustration of a motorist overtaking a man on a bike and giving him far more space than the Cycling Scotland video suggests.

Here’s a selection of tweets both applauding and criticising the latest campaign.

@CyclingScotland those images sort of give the impression that you should only give an arms length...

@magnatom @CyclingScotland @jimewing And an artic thundering by one arm's length away is still WAY too close. 6ft minimum space, please!

.@CyclingScotland Nice video! Where can we get a set of those brackets and how much do they cost? https://t.co/5ltLt0Oa4U

“As I said recently, I am determined to increase this spend on cycling this year not just on infrastructure but also by actively promoting cycling as a positive transport option with health and environmental benefits for all.

“People on bikes have as much right to be on the road as other transport users and we should all respect that.  We need to be vigilant of vulnerable road users, such as cyclists and pedestrians, young and old, and if we can share the roads in a manner which takes account of this then we will be creating a safer and healthier Scotland.

“That is why I am delighted to support the launch of this new campaign for cycle space on the roads and would urge everyone to heed its messages.”

Keith Irving, Cycling Scotland’s chief executive, added: “Cycling is becoming an everyday activity for people in many places across Scotland but one of the key barriers to more people cycling is concern about traffic and road behaviour.

He concluded: “Whether it’s a person on a bike making the journey to school, to work, to the shops or just for fun, we should all give everyone cycle space.”