This week's Tech Roundup contains everything from new bikes and trikes, locks and jerseys, and even an indicating backpack. We start with news of a major redesign from Diamondback.

Diamondback Bicycles has redesigned its Podium for 2016 (yes, we’re hearing about 2016 bikes already) and claims that it is now 100g lighter than previously, much stiffer, and 50% more aerodynamic across all yaw angles.

The new Podium has been engineered to incorporate aero features. It takes design cues for Diamondback’s Serios time trial/triathlon bike and features curved seatstays, a wide and deep down tube, and similar airfoil shapes.

The leading edges of those airfoil shapes are relatively unchanged from those of the Serios but the trailing edges have been cut short, down to about 55-60% of the full-length airfoil to cut weight. 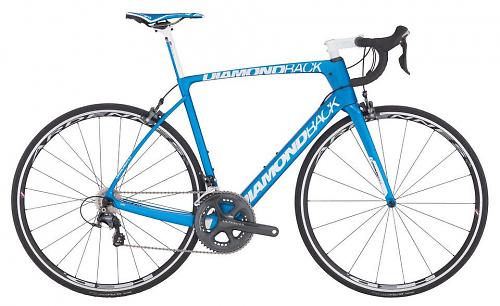 Unidirectional high modulus 40T carbon fibre is used for straighter portions of the frame while 30T and 20T is used in the areas where compliance is more important. A 27.2mm diameter seat post is used to add more comfort.

The Podium comes with carbon dropouts and internal cable routing.

The top-end Podium Equipe (main pic US$7,500) will come in a Shimano Dura-Ace (mechanical shifting) build with Hed Jet wheels, while the Podium Vitesse (above, $4.500) will have a Shimano Ultegra groupset and Hed Ardennes Plus wheels. We don’t have details on the UK price or availability yet.

Zwift has announced that users can now access its online cycling/entertainment platform on an immediate, on-demand basis, moving away from an invitation-only closed Beta product. 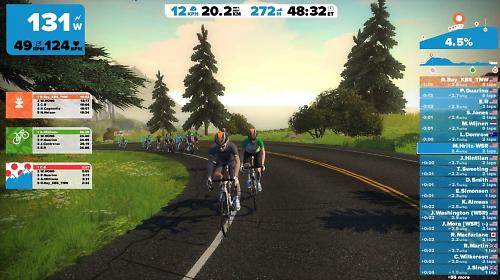 Since launching last October, Zwift has built a global community of cyclists who ride, train and race with each other in 3D generated worlds by connecting existing devices ( indoor trainers, power meters, heart rate monitors) over the internet to the Zwift platform. 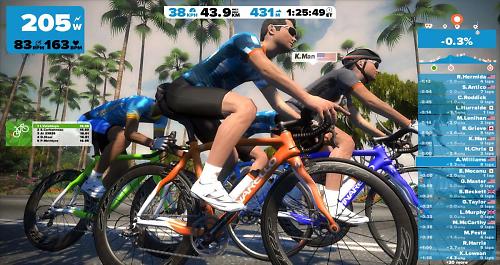 Earlier this year, Italian bike maker Pinarello became the first brand to be featured in the game, and Zwift later announced plans for users to ride (virtually!) the Dogma F8 within the game.

All that you need to join up and race online is an indoor cycle trainer, an ANT+ cadence/speed sensor and an ANT+ dongle. Zwift is currently free to use, although you’ll eventually need to pay a subscription of US$10 per month.

Knog has launched the Milkman Combo, a retractable, keyless, steel cable lock that’s designed to loop around your bike frame and an immovable object. 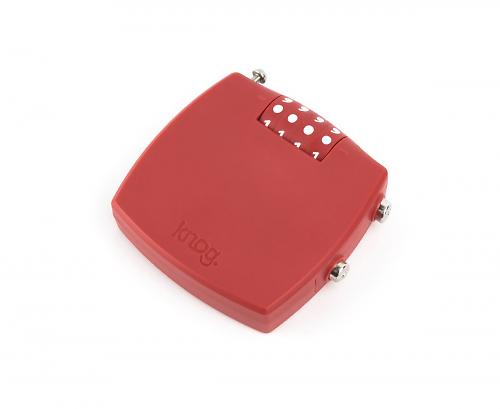 The Milkman Combo has the same 900mm-long cable as Knog’s key-operated Milkman and it’s small enough to fit into a back pocket (it measures 75mm x 75mm x 20mm). There are 10,000 different combinations.

It uses a stainless steel locking pin and a polycarbonate housing, and it weighs 132g, according to Knog. 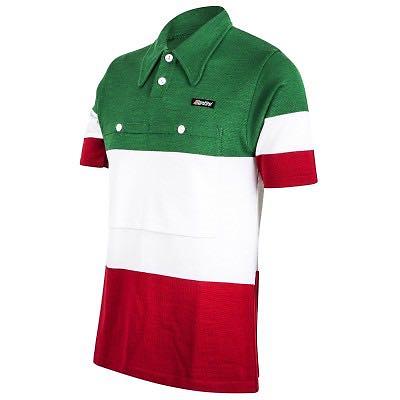 Prendas Ciclismo has a couple of new retro wool jerseys from Santini in stock, one made to look like an Italian champion jersey from the 1960s and a maglia rosa (the Giro d’Italia leader’s jersey) from the 1950s. These are part of Santini’s Racing Heritage collection produced thanks to their partnership with L'Eroica. 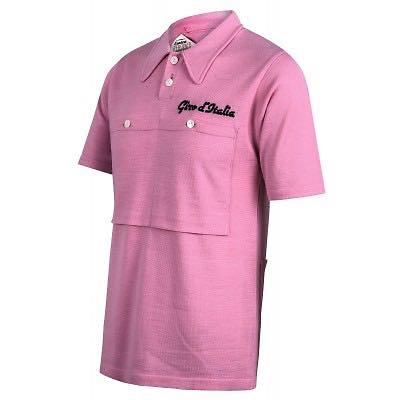 Port Designs are releasing a new Go LED backpack that comes with an integrated LED indicator that allows you to display four direction and warning signs: green left, forward and right arrows and a red exclamation mark as a warning sign. The bag is also covered in light reflective bands to enhance visibility. 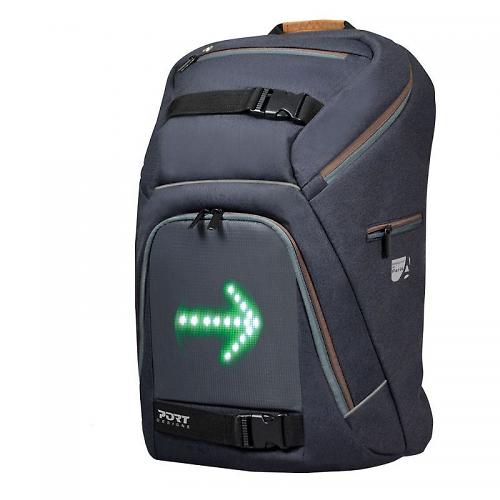 The wearer controls the LED panel by using a remote control unit that is fixed to the handlebar with a universal mount. The LED panel takes four hours to charge using a USB cable, and provides 40 hours of use between charges. 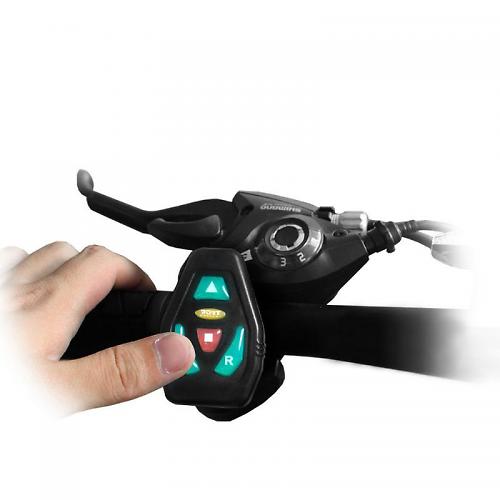 The backpack has a 35-litre capacity and weighs 1kg. It has padded laptop and tablet compartments, a padded back and shoulders, and various pockets. You also get a band to hold a helmet and a translucent rain cover that the LED can flash through.

Get more info at www.portdesigns.com.

A new tricycle called the Trivek offers ‘unparalleled manoeuvrability, comfort and safety’ according to its designers. They are currently looking for crowdfunding on Kickstarter.

The Trivek is a front wheel drive semi-recumbent built with a dual lean-steering mechanism, the idea being that you can take corners like you can on a bicycle. Custom built dampers allow you to adjust the steering sensitivity on the fly.Trive 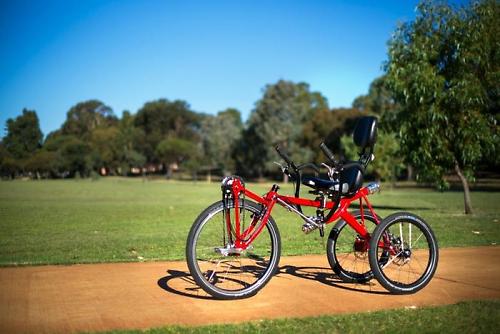 You sit upright as if on a chair so your head is above the traffic. The Trivek also has internal hub gearing and disc brakes.

For more info check out the campaign on Kickstarter.

Bespoke has opened a flagship store in London’s Canary Wharf.

The new store features a lightweight bike display area, another area spotlighting endurance bikes, and another themed area with the cobbles of the Koppenberg as its backdrop. 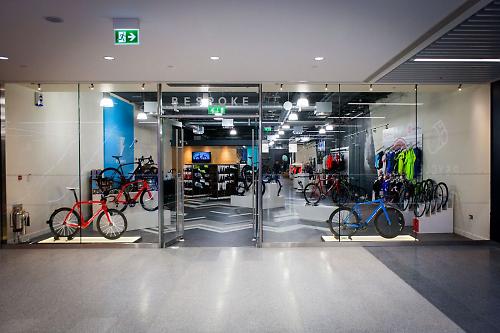 There are three fit studios which will also double as treatment rooms, each one equipped with Bespoke’s 4D Fit system, incorporating 3D motion capture using the Retul system as well as the Bespoke’s own proprietary software. 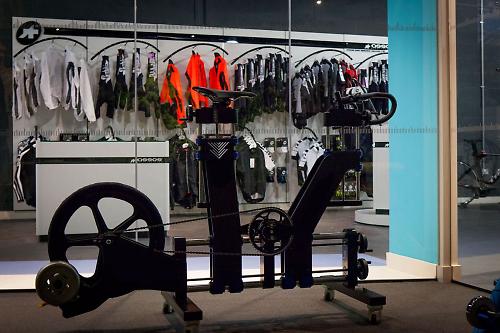 For more info, including how to find the store, go to www.bespokecycling.com.


Beyond the Peloton preview show in Reigate 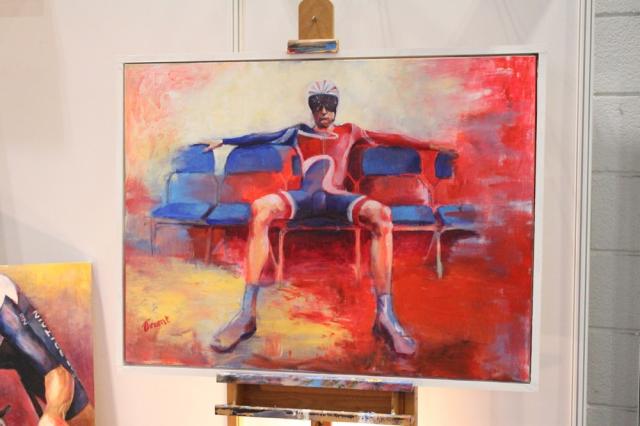 The main exhibition runs 15-21 June at Artefact, 36 Windmill Street, London W1T 2JT but they’ll be showing a few paintings and photographs ahead of that in Reigate.

For more details on the London show go to www.beyondthepelotonshow.com. For more on Maison du Velo go to www.maisonduvelo.co.uk.

Bowman Cycles has announced that every time you enter a Crystal Palace Crit you’ll improve your chances of winning a Bowman Palace frameset (£650) at the end of the series.

The more times you race, the more entries you’ll get in the prize draw.

Details of the racing can be found at http://crystalpalacecrits.wix.com/home

For more info on Bowman Cycles go to http://bowman-cycles.com 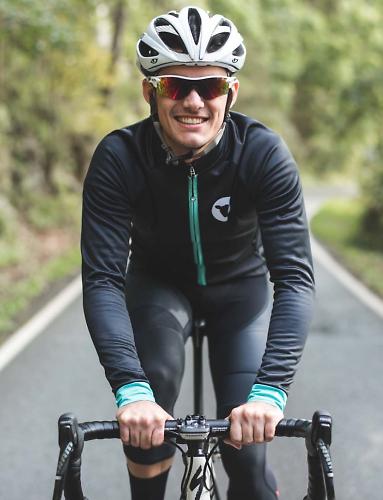 Previous Black Sheep releases have been based on a limited run format. Once the clothing has gone, that’s it. The Essentials clothing, though, will be available all year round. 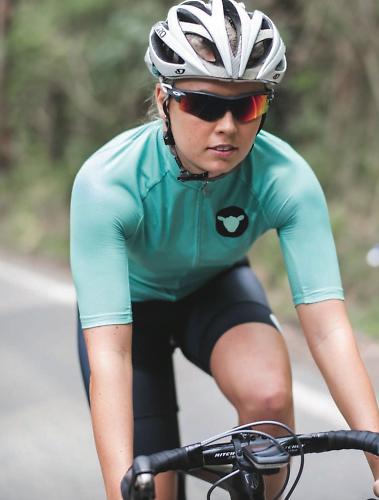 We don’t have pricing details at the time of writing so head over to www.blacksheepcycling.cc for that info.

Ateronon Active contains curcumin which is an anti-inflammatory agent derived from turmeric that is said to helps ease the aches and pains caused by strenuous exercise, assisting with muscle and joint recovery. 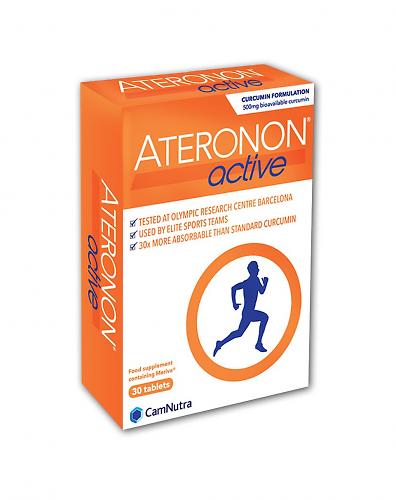 The manufacturer says that the formulation of curcumin and soy lecithin used in Ateronon Active makes it 30 times more absorbable than standard turmeric. The ingredients are not sports banned substances.

Ateronon says that taking one or two tablets every day relieves muscle tension and joint strain associated with DOMS, and that benefits can be felt within a week of starting to take the supplement.

Ateronon Active costs £15 for a pack of 30 tablets.