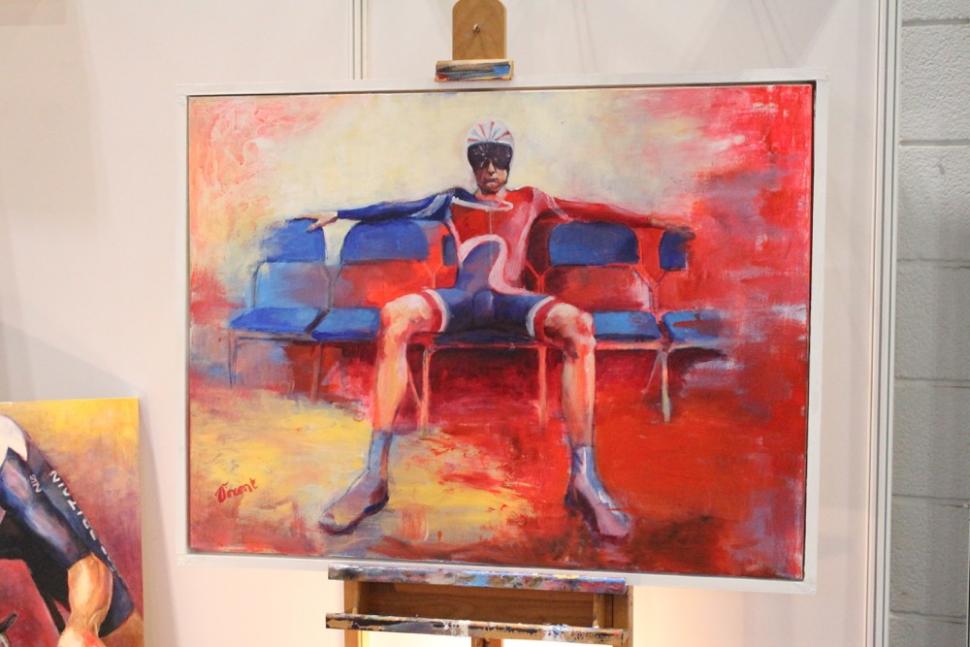 We spent Friday checking out the new products on display at the London Bike Show and here's our pick of the most interesting. This Torch T1 helmet comes with lights integrated into the moulding: five LEDs front and rear.

The helmet, developed in California, initially sought funding on Kickstarter back in 2012, achieving over 50% more than its $45,000 goal, and it is now available to buy through more conventional means priced at £85.

There are no protruding edges and the electronics are said to be fully stormproof. The LEDs are USB rechargeable (in about 1.5hrs) and offer a runtime of up to 12 hours. The T1 is available in several sizes and features a dial-adjust fit system.

Torch give a weight of 366g. That is more than a standard helmet but it’s not mega-heavy considering that it includes 10 LEDs.

We’ll try to get one in for review on road.cc.

For more info go to torchapparel.eu.

Edco wheels are back in the UK, the range starting out at £549.99 for the aluminium Tubeless Ready Roches. The rim width is 24mm so you can easily run wider tyres. Edco claim a wheelset weight of 1,571g. 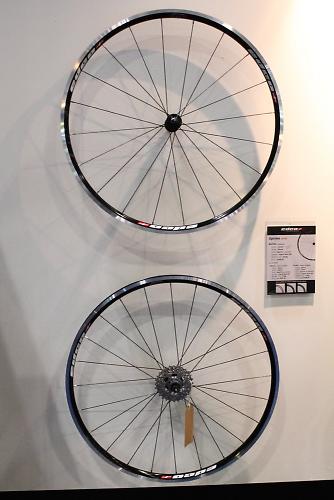 Like the rest of the wheels in the lineup, they feature Edco’s patented MultiSys cassette body that will take both Shimano/SRAM and Campagnolo sprockets. Usually it’s an either/or situation. That’s a big plus if you have bikes with groupsets from different manufacturers, or if you’re ever thinking of swapping.

This the Edco SuperG hub as used on the Optima series wheels. It shows you where to line up a Shimano/SRAM cassette... 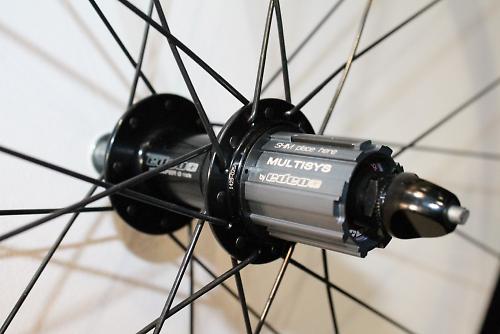 ...and where to line up a Campag cassette. 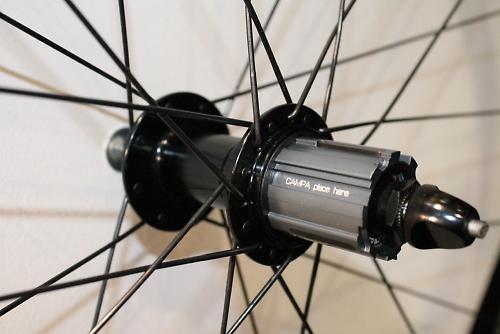 The Aerosport Bernina carbon clinchers (£2,199.99) come in the same 24mm width but, as you can see, they have much deeper rims. 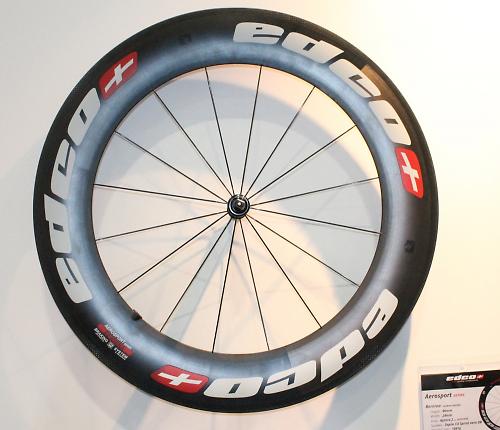 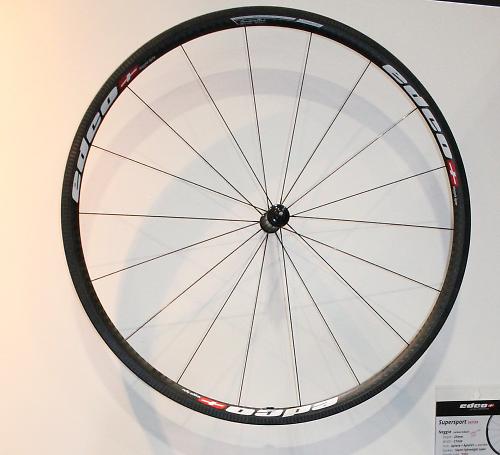 If light weight is your priority you need to go to Edco’s Supersport section where the tubular version of the Neggia wheels weigh in at a claimed 999g (the clinchers are 1,179g). That’s superlight and there’s a rider weight limit of 85kg.

Of course, you have to pay a premium for them: £2,249.99. The carbon rims are 25mm deep, the hubs are Edco’s own Aptera design, and they use double butted Sapim Lightweight SuperSpokes. The claimed weight is 1,891g. 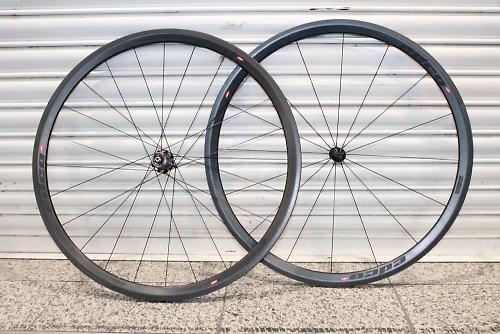 They’re getting even lighter for 2016. This is a sneak peek at next year’s model.

All Edco wheels come with Continental tyres as part of the package.

One other interesting item fro Edco is this clever Monoblock cassette that allows you to fit an 11-speed hub onto a 10-speed freehub body. 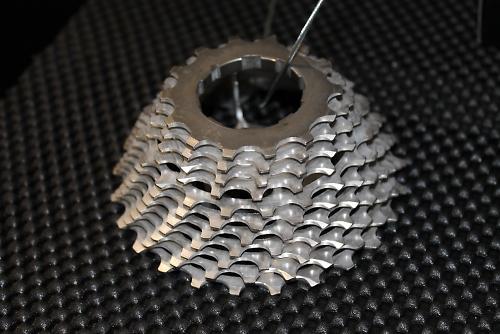 Usually, that would be impossible because a 10-speed body is smaller than an 11-speed body, but Edco use long cams (teeth) at the front of the cassette and a proprietary lockring. 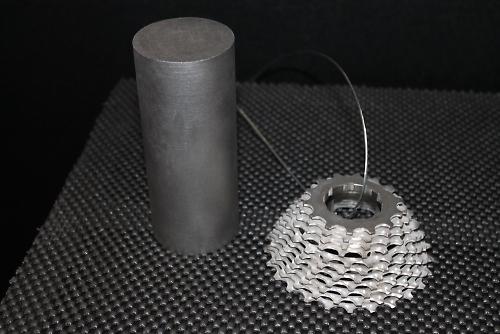 If you want to use it on an 11-speed body, you just use a different lockring.

The Monoblock, as the name suggests, is a one-piece cassette. It’s made from a hardened cromo steel with a helluva lot of machining that gets it down to a claimed 163g. 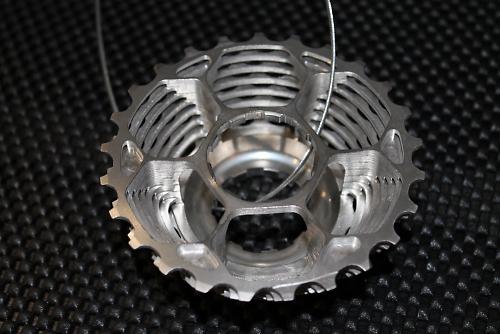 
Beyond the Peloton exhibition for London

Photographer Geoff Waugh and artist Vincent Kamp are holding an exhibition in London this summer focusing on British road and track cycling.

Geoff has been one of Britain’s most eminent cycling photographers over many years. Vincent is less known to us but he has a lot of experience in portraits in various media. 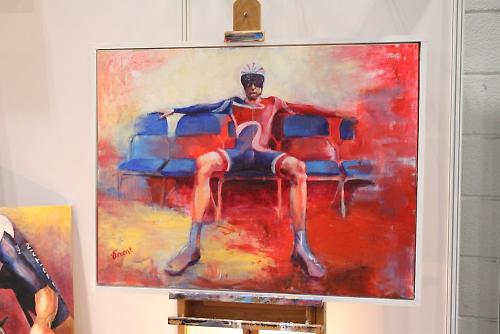 Called Beyond the Peloton, the exhibition will feature exclusive photos and paintings of some of Britain’s most successful riders like Bradley Wiggins and Chris Hoy. It runs 15-21 June 2015 at Artefact, 36 Windmill Street, London W1T 2JT.

Pure Fix now have bikes that glow in the dark. You have to give them an hour of sun to activate the finish and you’re promised over an hour’s glowing. 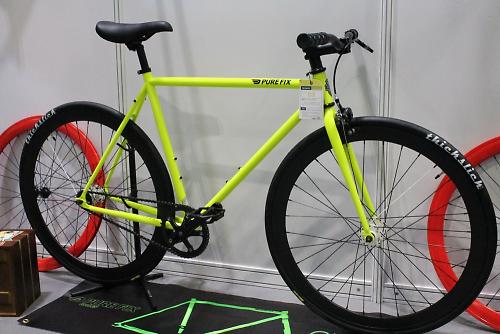 The frames and forks are made from hi ten steel and they come with flip flop fixed/freewheel hubs.

The bikes are available in a whole bunch of non-glowing options too. For more info go to purefixcycles.eu. The frameset is sub 1,200g, according to Rose, and it is built up with a SRAM Red groupset, Ritchey bars, stem and seatpost, and a Selle Italia SLS Kit Carbonio Monolink saddle.

In its standard version it comes with Mavic R-Sys SLR wheels. However, if you want the super-light configuration shown here, you have to pay a surcharge for the AX-Lightness wheels.

Exposure Lights has got itself a new logo, here it is… That’s not the only news, the company has launched the new Link. It’s available in two versions, the regular Link and the Link Plus, and basically is a helmet-mounted front and rear light. 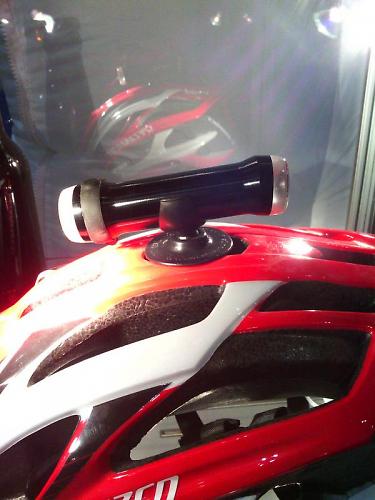 It’s essentially the Trace and TraceR melded together into one unit. Helmet lights are popular with mountain bikers for off-road night riding, and also commuting and urban cyclists wanting to boost their visibility to other road users with a high mounted light. 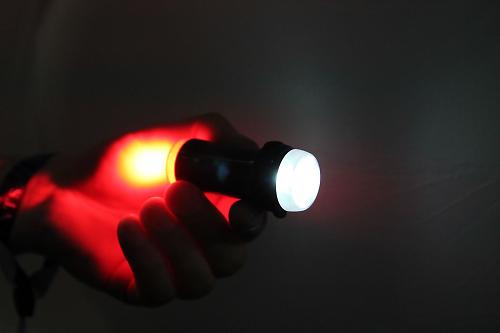 The rear light is canted at a slight angle, to take into account the angle of the light when it’s on top of your head when you’re crouched over the handlebars. The USB charging port is underneath the thick rubber band in the middle of the light. It'll cost from £65.

Fabric is a new brand from the creators of Charge Bikes, and they’re focusing on saddles at the moment… We’ve tested the Scoop, but when we popped down to see them last year they showed some really interesting saddles in development. One of them, the ALM, was a real head-turner and the good news is that it’s now available. 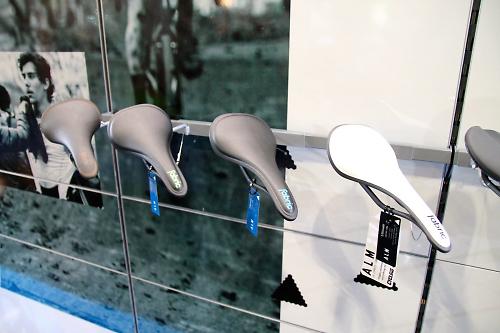 The name stands for additive layer manufacturing (commonly referred to as 3D printing) and owes much to the brands work with Airbus. The pair have previously collaborated, producing the 3D printed titanium dropouts for the Charge Freezer ‘cross bike. So the new ALM saddle started out as similar development, and has now gone into production. While the early development was for it to be a 3D printed saddle, prohibitive production costs have meant they’ve actually made it from carbon fibre using more regularly available manufacturing techniques. The result is actually a lighter saddle.

The saddle features a carbon fibre base and rails with a one-piece appearance and an polyurethane foam pad and cover vacuum bonded to the thin shell. It’s an extremely minimalist saddle in appearance, and it’s extremely light, just 130g for the lightest version. 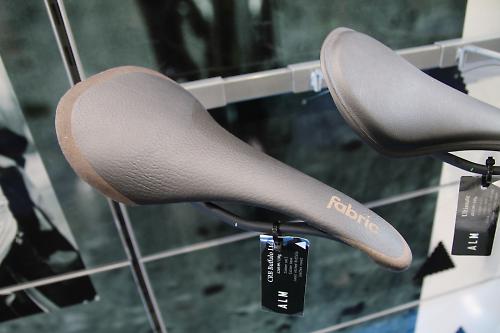 That lightest version is the ALM CRB Buffalo Ltd, which features a Buffalo leather cover with laser etched decals. It isn’t cheap, costing £249.99. Weighing 10g more (140g) is the ALM Ultimate which costs £225.99. This one is available with a white or black cover.

The rails have been designed to provide a high level of flex, mimicking a leaf spring design. This way the saddle offers a lot of comfort, and that means they can get away with only minimal padding across the top. We know the nutrition market is a crowded one, there’s no shortage of choice. Stealth’s aim though is to provide energy products that are gentle on the stomach and digestive system. Speaking from personal experience, hard racing or multi-day rides fuelled by energy products can leave me with a bad gut and it's not very pleasant at all.

The Stealth energy drinks attempt to achieve this by using nitrous oxide modulators to protect the gut, with 20g of carbohydrate per litre. The isotonic gels use rice starch and fructose with natural flavours and sweeteners to provide a quick supply of energy and be easily digestible and easy on the stomach. 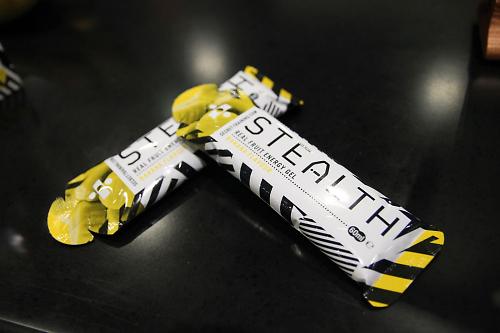 All sounds very interesting. I had a taste of the drinks, and they’re certainly very light on the taste buds, and the gels - I tried the banana one that uses real bananas - was particularly tasty. Not an extensive test of, course, so I brought back some samples to have a go on during my next ride.

Check out the full range at www.secret-training.cc/shop-stealth

1
Giro d’Italia: Riders board buses after riding through neutral zone after Stage 19 is shortened in response to peloton protest
2
Ratio has a nifty way to add an extra shift to your 1x11 SRAM mechanical groupset
3
Canyon set for €500m+ private equity sale?
4
Grant Shapps backtracks on cycling and walking pledge
5
Near Miss of the Day 483: Audi driver makes close pass while beeping horn
6
Jumbo-Visma, GreenEdge and Sunweb swap bike suppliers for 2021
7
Video: Slow-moving driver forces cyclist off the road on Woodhead Pass
8
Fernando Gaviria tests positive for COVID-19 – for the second time this year